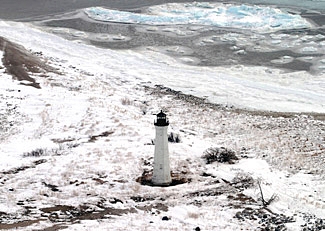 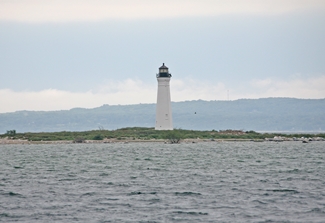 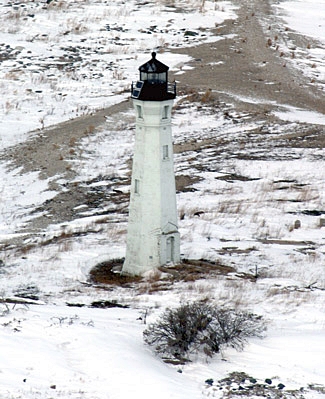 Isle aux Galets, Isle of Pebbles, is a gravelly, low-lying island situated in the northeast corner of Lake Michigan, between Beaver Island and the mainland. French explorers named the island Isle aux Galets, but subsequent English-speaking inhabitants of the area had a hard time pronouncing the name, and it eventually transformed into Skillagalee. Lighthouse Service records initially used both names when referring to the lighthouse, but by 1889 Skillagalee started to be used exclusively. Around 1910, Ile aux Galets started to be used again, and it is listed by that name on modern light lists published by the U.S. Coast Guard. Interestingly, Skillagalee is actually a word that means a thin broth or gruel.

The first formal call for a light on Skillagalee Island was likely a petition from certain ship-owners on the northern lakes presented by C.M. Reed to the U.S. House of Representatives in 1844. On March 3, 1849, Congress set aside $4,000 for a lighthouse on Skillagalee as part of an act with the lengthy title: An act making appropriations for light-houses, light-boats, buoys, &c., and providing for the erection and establishment of the same, and for other purposes. On November 26, 1850, Henry B. Miller, Superintendent and Inspector of Lights on Northwest Lakes, sent a letter to Stephen Pleasonton, the Fifth Auditor of the Treasury who was in charge of the countrys lighthouses, informing him that a lighthouse had been completed on Skillagalee. It is a beautiful red light, distinguishable some fifteen miles, and serves the mariner well as a beacon, to steer clear of the rocks and shoals in its immediate vicinity, wrote Miller.

The lighthouse consisted of a lantern room mounted atop a keepers dwelling, and eight lamps and fourteen-inch reflectors were used to produce the fixed red light, which was exhibited at a height of twenty-five feet above the island. The stone, one-and-a-half-story dwelling measured twenty by thirty-six feet and had an attached fifteen-foot-square kitchen. The tiny island must not have been a very appealing place to live as the first five keepers of the lighthouse lasted only one season. In 1858, a fifth-order Fresnel lens replaced the array of lamps and reflectors used in the lantern room.

In 1866, the Lighthouse Board noted the following on Skillagalee Lighthouse:

The light at Skilligalee is of insufficient elevation and cannot be seen far enough to subserve the wants of navigation. It is recommended that this light be rebuilt to a height of seventy feet and a more powerful illuminating apparatus provided. An efficient fog-signal is also needed. To accomplish these desired improvements an appropriation of forty thousand dollars is asked.

On March 2, 1867, Congress appropriated the requested amount for rebuilding and improving the lighthouse at Skillagalee, but for some reason a fog signal was not built with this money. Later that year, work began on a 100-foot tower and an attached dwelling, both built with yellow brick. Work was suspended at the close of the season and resumed the following spring. On July 19, 1868, a fixed white light produced by a third-order Fresnel was displayed from the tower at a focal plane of 106 feet above the lake.

Just two years after the new lighthouse was completed, Keeper Patrick McCann noted the island had lost twenty feet on the northwest side and twelve feet on the southeast side. This loss was likely due to the lake level, which had risen fifteen inches from 1869 to 1870. A storm on December 4, 1873 washed away two-thirds of the island, and Congress provided $5,000 in 1875 that was used to build a substantial protection around the whole island.

On June 23, 1874, Congress appropriated funds for a first-class steam siren for Skillagalee Island. The fog signal commenced operation in the fall of 1875 and was joined by a duplicate siren in 1880. On November 1, 1890, ten-inch steam whistles, built by Thomas Manning, Jr. of Cleveland, Ohio, replaced the sirens.

On March 7, 1888, a $6,875 contract was made for tearing down and rebuilding the tower on Skillagalee Island. A temporary lens lantern was displayed on the island on May 10, 1888, and by the end of June, the 100-foot tower had been demolished and three courses of stonework for the new foundation had been laid. Bricks from the old tower were cleaned and used in the new tower along with 14,000 bricks delivered to the island. The old lantern room and third-order Fresnel lens were taken to the lighthouse depot in Detroit, and a new lantern room and fourth-order, Barbier & Fenestre Fresnel lens were provided.

The new Skillagalee Lighthouse was an octagonal brick tower, measuring fifty-two feet from base to ventilator ball, and was connected to the 1868 dwelling by a twelve-foot-long covered passage. The diameter of the tower tapered from fourteen feet at the base to nine feet at the octagonal lantern room. Keeper Vetal Bourissau placed the new light in operation on October 12, 1888. A brick oil house was added to the station in 1902.

On October 19, 1901 Keeper Andrew G. Bourissau and Second Assistant Keeper Walter E. Grobben drowned in Lake Michigan while attempting to sail from the lighthouse to the mainland. During the year 1901, 132 lives were lost on the Great Lakes.

Louis Beloungea, an Odawa Indian who had been serving as an assistant keeper at Waugoshance Lighthouse for eight years, was transferred to Skillagalee and promoted to head keeper to replace Bourissau. Keeper Beloungea was succeeded by his son, also named Louis, who had been serving as his first assistant for several years. In 1919, Keeper Beloungea and Second Assistant Keeper August Keller rendered assistance to the occupant of a motor boat attached to Squaw Island Lighthouse and provided a sail so he could make his way back home. Keeper Beloungea was awarded an efficiency flag for having the model station in the district during 1923.

In June 1946, Daniel A. Backus, who had been serving as an assistant keeper at the lighthouse for over a decade, set off from the mainland to return to the station. Not far from shore, his boats engine failed, and Backus drifted helplessly for three just outside the steamer lanes before coastguardsmen picked him up off the southeast tip of Beaver Island. Though he had no food, Backus was reported to be little worse for wear and returned to duty at the station. The other keepers at the lighthouse did not report Backus failure to return on the expected date as they believed he had remained on the mainland due to a light fog.

The fog signal at Skillagalee was changed from a steam whistle to an air diaphone in 1933, and in 1951, the stations light was electrified. In 1959, the station was converted to unattended operation, and a 175mm automatic lens was installed in the tower in place of the Fresnel lens.

The crew of the Coast Guard cutter Sundew, under the command of Lieutenant Commander Leonard Garrett, was sent to the island in 1969 to demolish all the structures on the island save the 1888 brick tower. Demolition became a bit tricky when the crew discovered that the walls of the dwelling were of inter-locking brick construction and three bricks thick. Fran Martin, a reporter for the Petoskey News-Review, wrote at the time, Care had to be taken because the 50-foot light station was adjacent and will remain in service. After the dwelling was dynamited, all of the combustible debris was heaped up and set on fire.

In June 2011, Ile Aux Galets Lighthouse was declared excess to the needs of the United States Coast Guard and made available to eligible organizations under the provisions of the National Historic Lighthouse Preservation Act of 2000. Qualified entities were given sixty days to submit a letter of interest and were required to obtain a conveyance from the State of Michigan for the bottomlands on which the lighthouse stands. When a qualified owner was not found, an online auction for the lighthouse was initiated on July 1, 2015. Only two bidders participated in the auction, which ended on September 11, 2015 with a high bid of $23,250. The high bidder turned out to be Bill Collins, who already owned Manistique Lighthouse in Michigan and Liston Rear Range Lighthouse in Delaware.

For a larger map of Ile Aux Galets (Skillagalee) Lighthouse, click the lighthouse in the above map.

Ile Aux Galets Lighthouse must be seen by boat or plane. A close approach to the island by boat is not possible due to the shallow water and dangerous reefs surrounding the island. Fresh Air Aviation offers Lighthouse Air Tours that allow aerial photographs of this lighthouse. Extended westbound lighthouse cruises offered by Shepler's pass by Ile Aux Galets Lighthouse, as do tours offered by Bonadeo Beaver Island Boat Charters.