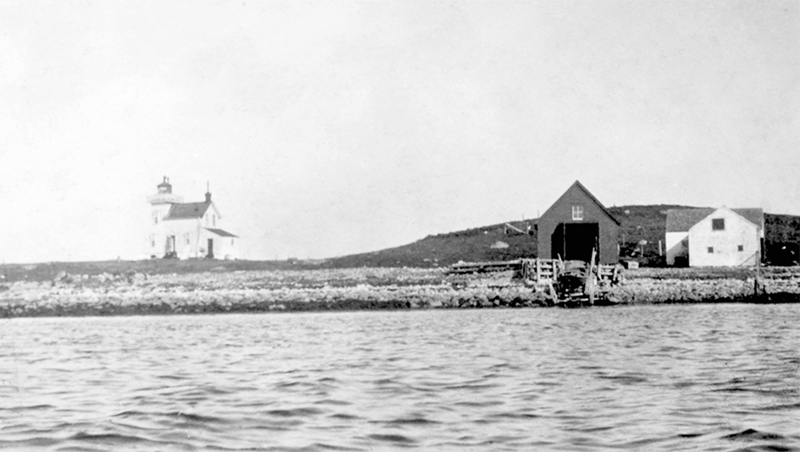 Page Island is small island situated at the entrance to the harbour at Port La Tour. A lighthouse was established in 1851 on nearby Baccaro Point, the southernmost point of the Nova Scotia mainland, but authorities felt another light was needed to properly mark the entrance to Port La Tour.

The Annual Report of the Department of Marine for 1890 provides the following information on the lighthouse built on Page Island:

- A lighthouse has been erected on Pages Island, Port Latour, on the southern coast of Nova Scotia, for the purpose of aiding vessels seeking the harbour of Port Latour.

The light is fixed white, elevated 46 feet above high-water mark. The tower is a square wooden building, with kitchen attached, painted white. The tower is surmounted by an iron lantern painted red. The height from ground to vane on lantern is 34 feet. This lighthouse was built by Messrs. G. DeChamp & Sons, of Shelburne, for the contract price of $1,425, and was put into operation on the 15th November. The total expenditure in connection with this building to date was $1,009.57.

Benjamin S. Crowell was hired as the first keeper of the light at an annual salary of $100. In 1894, a well was dug on the island to supply fresh water, and in 1898, the stations boathouse was moved back from the landing, and a protection work built of logs was placed on the east side of the boat slip. Also in 1898, Keeper Crowell was given a hand-operated foghorn that he was to sound in response to the signal of vessels in the vicinity.

Alfred M. Powell was the longest-serving keeper of Page Island Lighthouse. He began his service in 1905, and kept the light until the beginning of 1930, when he would have been sixty-six. E. Sholes took over after Powell and served until July 15, 1930. After this, it appears that a lighted offshore buoy replaced the lighthouse.

For a larger map of Page Island Lighthouse, click the lighthouse in the above map.