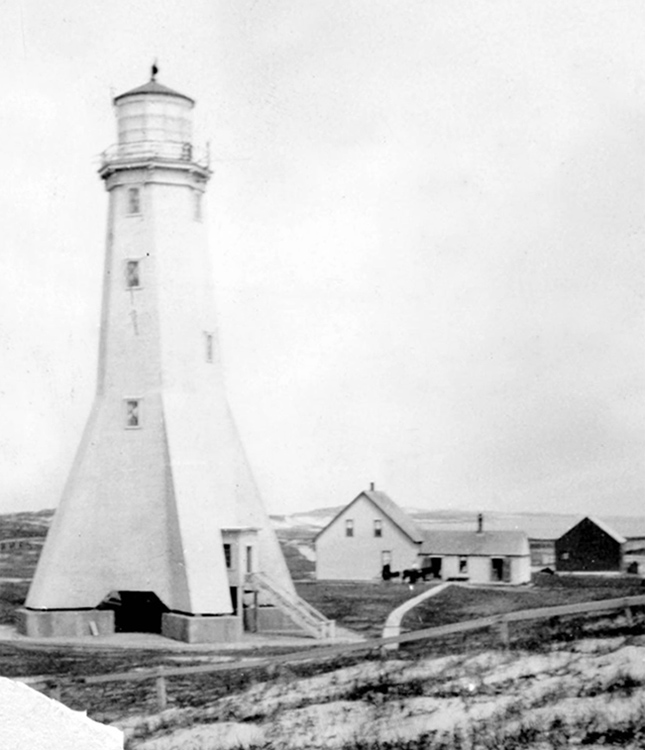 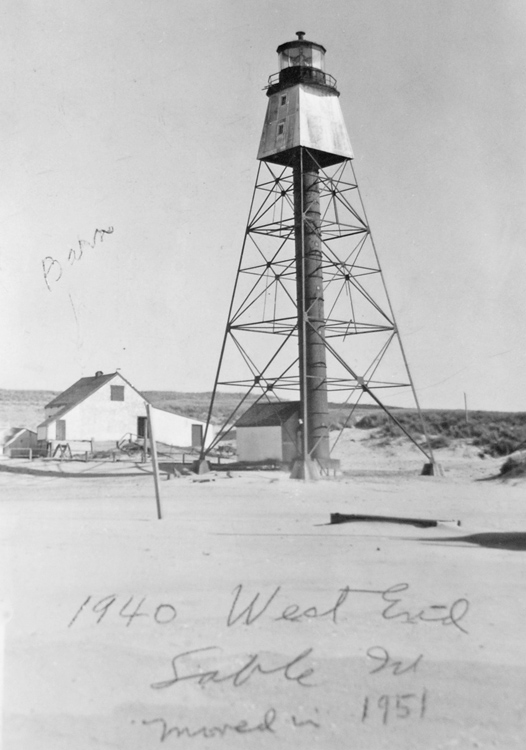 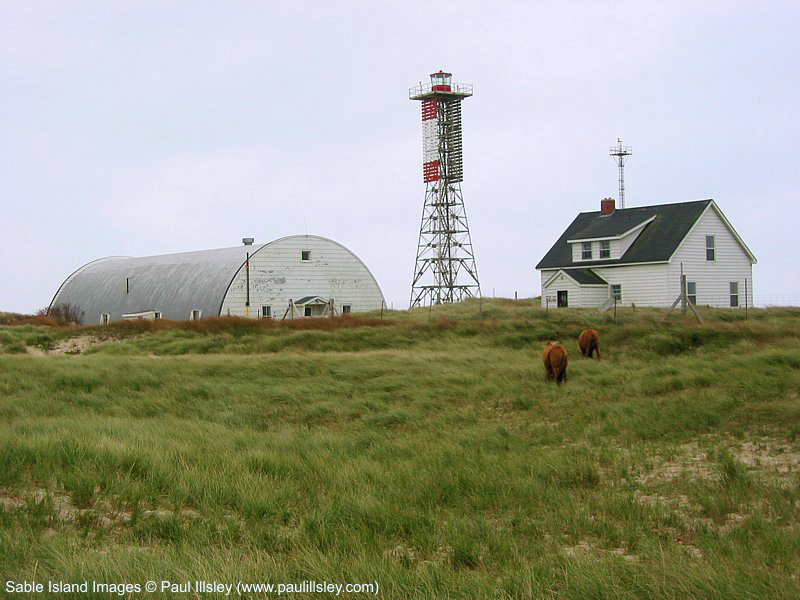 Sable Island, literally Sand Island, is a crescent-shaped ribbon of sand situated 175 kilometres southeast of the nearest point of mainland Nova Scotia. The islands low profile and location near a major transatlantic shipping route, coupled with thick fogs, treacherous currents, and sandbars that extend a great distance from the north and south tip of the forty-three-kilometre-long island, have led to numerous shipwrecks. The islands ever shifting sandbars have snagged an estimated 350 vessels over the years.

Concern for the fate of shipwrecked victims stranded on Sable Island led to a lifesaving station being built in 1801. The station was typically staffed by a superintendent with around fifteen men under his command. The superintendent was initially paid a salary along with a percentage from the net proceeds of wrecked property that his team saved. This humane establishment was staffed until 1958.

To offset the cost of maintaining the lifesaving operation, some of the islands herd of wild, hardy horses were regularly taken ashore and sold, and the islands residents picked wild cranberries that were likewise sold on the mainland. Cattle were brought to the islands fly-free environs and pastured on the grass along with a few sheep and pigs to provide fresh meat. Potatoes and other root crops, like turnips, carrots, and beets, were also raised for food. Four outposts distributed around the island were each staffed by a keeper and an assistant, who regularly patrolled the shores looking for any signs of trouble.

In 1835, Joseph Darby, superintendent of the island, noted that four vessels had been lost on the island that year. No lives were lost in three of the wrecks, but the entire crew of the American brig Abigail perished when it ran aground in October. That year, merchants and others concerned in navigation petitioned for the establishment of a lighthouse on the dreaded island.

Placing a lighthouse on the island might seem an obvious way to prevent shipwrecks, but this topic was fiercely debated. Those who opposed a lighthouse felt that its presence would entice mariners to run for the lighthouse and lure them closer to the deadly shoals and sandbars surrounding the island. Others felt a light would help mariners deduce their true position and avoid the treacherous hazards.

In 1870, parliament voted an initial $5,000 for the purpose of constructing navigational aids on Sable Island. The Department of Marine noted the completion of a lighthouse a steam fog whistle on both the east and west ends of Sable Island in its 1873 report:

A new lighthouse has recently been erected on the east end of Sable Island, near Lighthouse Hill, so-called, and the light was first exhibited on the 14th February last. The light is a powerful fixed white dioptric, second order, and is elevated 120 feet above high water, and in clear weather can be seen at a distance of 18 miles, although it has been reported to have been seen much farther off. The tower is an octagonal wooden building 86 feet high, painted alternately white and dark brown, and stands about 13 miles from the end of the Island. It will be very useful as a day beacon for ships at a distance, and will enable persons to distinguish the island long before they can see it or come near its dangerous bars. At night it will be more useful still, as from the mast of a vessel at sea it will be seen a long distance off, probably 25 miles. The apparatus is made of heavy cut crystal, by Sautier, of Paris, at a cost of upwards of $10,000, including additions by Chance, of Birmingham, and is illuminated by one of Dotys concentric 4-wick lamps, and has been pronounced, by persons who have seen it at a long distance, to be a most brilliant light, looking like a large ball of fire. It will also form a splendid look-out for the Humane Staff on the Island, who will be able to command from the top of the tower a fine view of nearly the whole Island. In the immediate vicinity of the lighthouse a powerful steam fog whistle has also been erected, and is sounded in thick or foggy weather as follows: First, a blast of three seconds, then an interval of three seconds; then another blast of three seconds, and an interval of same duration; and then a blast of three seconds with an interval of forty-five seconds to complete the minute. It will be heard from three to fifteen or twenty miles, according to the state of the atmosphere and the force and direction of the wind. Mr. J. Norman was appointed engineer of the steam fog-whistle and keeper of the lighthouse, on 24th December, 1872, at a salary of $600 per annum; and he will be assisted by two men of the staff, who will take their turns in watching the light at night, and attending to the steam fog-whistle when in operation.

A very superior lighthouse has also been recently erected on the west end of Sable Island, from which is exhibited one of the most powerful revolving white lights which are to be seen on this continent. The apparatus is on the catoptric principle, and has three faces, following one after another, and then an entire cessation of light. In these three faces there are fourteen circular burner-lamps of the most powerful description, each having 24-inch reflectors. The light is elevated 123 feet above high water, and makes a complete revolution in three minutes, showing three distinct flashes at intervals of half a minute, the cessation of the light being one and a half minute during each revolution. This light was first exhibited on the 15th of November last, and can be seen at a distance of upwards of eighteen miles. The tower is an octagonal wooden building, 98 feet high, and is painted white. In the vicinity of this lighthouse a powerful steam fog whistle has been erected, and will be sounded eight seconds in each minute, leaving an interval of 52 seconds between each blast. It will be probably heard from three to fifteen or twenty miles, according to the state of the atmosphere and direction and force of the wind. Mr. William Morrison was appointed engineer of the steam fog-whistle and keeper of this lighthouse, on the 9th of July last, at a salary of $600 per annum, and he has two of the staff to assist him.

The total expenditure up to 31st December, 1873, on account of these two lighthouses and two steam fog-whistles, including sheds and keepers dwellings, was $58,070.98.

A duplex was built near each lighthouse, and each station had a barn, along with two cows and a horse. The lighthouses and fog whistles couldnt prevent all shipwrecks, but they were appreciated by mariners. The brigantine Minnie Bruce was running near the island at night not longer after the lights were placed in operation, when the captain spied the eastern light and shifted his course to avoid a sandbar. He reported to a newspaper that if it had not been for the light, he would have, in all probability, lost his vessel and all on board.

Fire destroyed the fog whistle on the east end of the island on May 21, 1874. A metal plate had been placed in the rafters near the smokestack and apparently became so hot that it started the roof on fire. As the utility of the whistle had been in question given the length of the northeast bar, the surviving machinery was taken ashore and the aid was discontinued. The fog whistle on the west end of the island remained in use until July 1, 1878, when it too was discontinued. The boiler required large repairs, and the usefulness of the whistle to mariners did not justify the expense of maintaining it.

In 1882, the lighthouse and other buildings at the West End station had to be moved after over eighty feet of the island had been lost to erosion since the light was established. A cement foundation was formed 1,218 feet east of the original site, and the lighthouse was taken down and relocated. The West End Light had to be moved one-and-a-half-miles further inland in 1888. At this time, an octagonal ferro-concrete tower was built with four equally spaced buttresses at its base for extra support. This lighthouse stood ninety-seven feet tall, and its light, displayed from a height of 118 feet above the water, was placed in operation on October 20, 1888. A third-order lens was installed atop the lighthouse in 1912.

In December 1910, James Horne, the assistant keeper, accidentally shot himself through the calf of his left leg, making an ugly wound. R. J. Bouteillier, superintendent of Sable Island, washed the wound with Boracic acid, applied a poultice, and left instructions to have it changed later that evening.

In 1917, a new ninety-foot-tall, steel, skeletal tower equipped with a new illuminating apparatus was erected 400 metres east of the 1888 West End Lighthouse at a cost of roughly $12,000. A new taller square, skeletal tower was built just over two miles away from the 1917 West End Lighthouse in 1940, and then this tower was moved one-and-a-quarter mile inland in 1951. The West End Light was made unwatched in 1960, and Arthur Dooks, its last keeper, was transferred to another lighthouse.

A tall mast, supported by four guy wires, was erected in 1971 to display an automated light, and the 1940 skeletal tower was torn down. The mast light must have had issues, as in 1980, the government awarded a $189,977 contract to J.L. Nichols of Bedford to construct another skeletal tower to display the light. West End Light was deactivated in 2014. The 1980 tower remains standing, but may soon be threatened by erosion.

For a larger map of Sable Island West End Lighthouse, click the lighthouse in the above map.

Visiting Sable Island, which is part of Sable Island National Park Reserve is possible, but it takes careful planning and is not cheap. Click here for information on getting to the island.