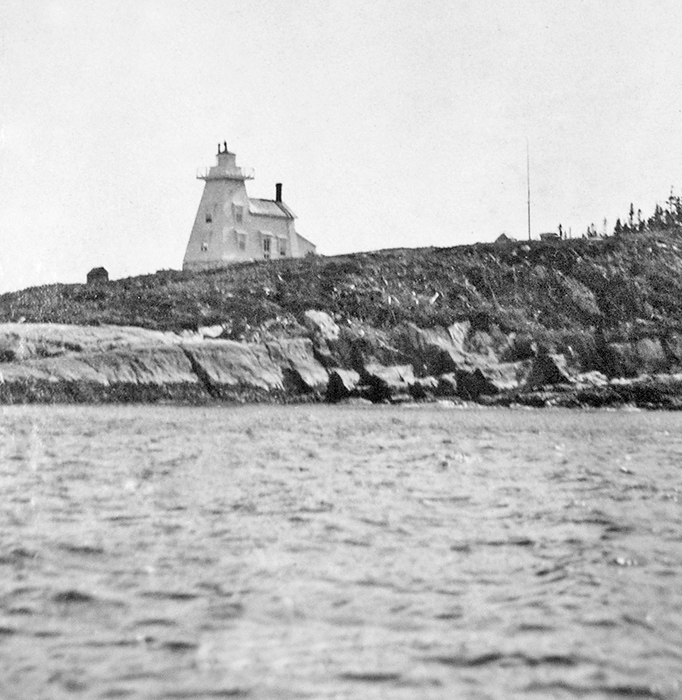 Ship Harbour is a rural community located along the Eastern Shore of Nova Scotia about eighty kilometres east of Halifax. It is situated at the head of a natural harbour of the same name which opens into the Atlantic Ocean and is about eight kiloemtres in length, though its entrance is not even a half-kilometre wide. Ship Rock, which lends its name to the harbour and community, is located east of the harbour entrance and is a remarkable cliff of clay slate, twenty-three metres tall, that resembles a ship under sail when viewed from a distance.

The Department of Marine publicized the completion of a lighthouse on Wolf Point in 1895, on the northeast tip of what was give as Nichol Island but is now known as Wolfes Island, to guide mariners into Ship Harbour:

A lighthouse has been erected on Wolf Point, on the western side of the entrance to Ship Harbour.

The light is a fixed light, elevated 87 feet above high-water mark, and visible 15 miles from all points of approach by water. The illuminating apparatus is dioptric of the seventh order.

The lighthouse is of wood, and consists of a square pyramidal tower with dwelling attached, the whole painted white, and surmounted by an iron lantern painted red. The height of the tower from the base to the vane on the lantern is 35 feet.

The light is intended principally to guide vessels into and out of Ship Harbour, or to a safe anchorage inside the islands.

The work of erection was done by Mr. John Chisholm, by days work, local labour being employed, the materials having been procured in Halifax and sent to the station by the Newfield. The cost of the work amounted to $1,557.45. This course was pursued in consequence of the lowest tender received, $2,290, being higher than the estimate of the chief engineer of the department.

Law Marks was an early keeper of the lighthouse, but in 1898, the Palmer family took over. David Palmer looked after the light for a few months, before his son Howard was made keeper. Howard Palmer and his wife Effie had at least four children, and he was in charge of the light through at least 1940.

In 1900, a boathouse was built at the stations inner landing, and in 1910, Keeper Howard was given a hand-operated foghorn to sound in response to the signal of vessels in the vicinity.

The Annual Report of the Department of Transport in 1949 indicated that a new combined lighthouse and dwelling had been completed at Ship Harbour to replace an obsolete unit. This new lighthouse followed the style used throughout Nova Scotia in the first half of the twentieth century: a square, two-storey dwelling with a lantern room centered atop its pyramidal roof.

Today, a skeletal tower, fitted with a rectangular daymark with white and red horizontal bands, displays a flashing green light from Wolfes Point.

For a larger map of Ship Harbour (Wolfe Point) Lighthouse, click the lighthouse in the above map.

The modern light at the entrance to Ship Harbour is best viewed from the water.