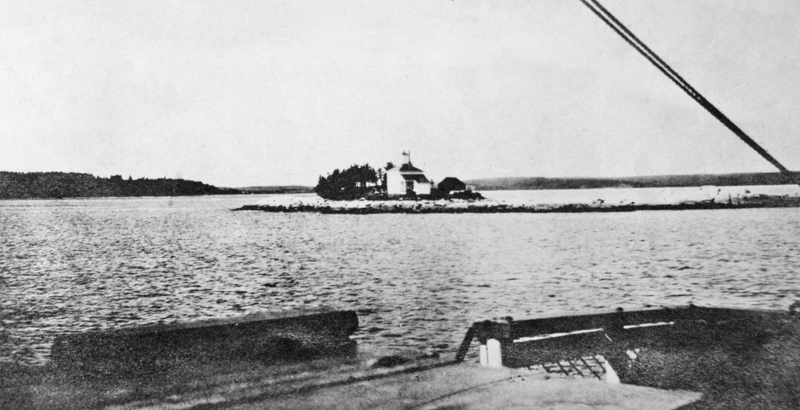 Marie Joseph is a small community on the Atlantic Coast of Nova Scotia, located just east of the dividing line between Guysborough and Halifax counties. The harbour at Marie Joseph is well sheltered and can be entered from the east and the west, but the approaches are so narrow that only mariners with local knowledge are advised to use them. A 1930 edition of Nova Scotia Pilot noted the inhabitants scattered along the shores principally rely on fishing for subsistence, but cultivate the drift hills and keep cattle as well.

A Notice to Mariners, published in early 1905, alerted mariners to a new lighthouse established near Marie Joseph:

A lighthouse has been erected by the Government of Canada on the eastern Thrumcap Islet, at the eastern entrance to Mary-Joseph Harbour, south coast of Nova Scotia, and the light will be put in operation on the opening of navigation in the spring of 1905.

The lighthouse stands on land 10 feet above high-water mark and 60 feet back from the eastern extremity of the islet. It is a square wooden building, surmounted by a square wooden lantern rising from the middle of the cottage roof. The sides of the building and lantern are painted white and the roofs red. The lighthouse is 36 feet high from its base to the ventilator on the lantern.

The light will be a fixed white light, elevated 40 feet above high-water mark, and should be visible 11 miles from all points of approach. The illuminating apparatus is dioptric of the seventh order.

Clarence W. Anderson of Sherbrooke built the lighthouse under a contract for $1,800, and John Baker was hired as the first keeper of the lighthouse at an annual salary of $300.

The wooden lighthouse remained on the island through at least 1954. In 2020, a square, skeletal tower, featuring a red-and-white, rectangular daymark with a red triangle in its center, displays a flashing red light.

For a larger map of Marie Joseph (Thrumcap Island) Lighthouse, click the lighthouse in the above map.

The modern light on Thrumpcap Island is best viewed from the water.