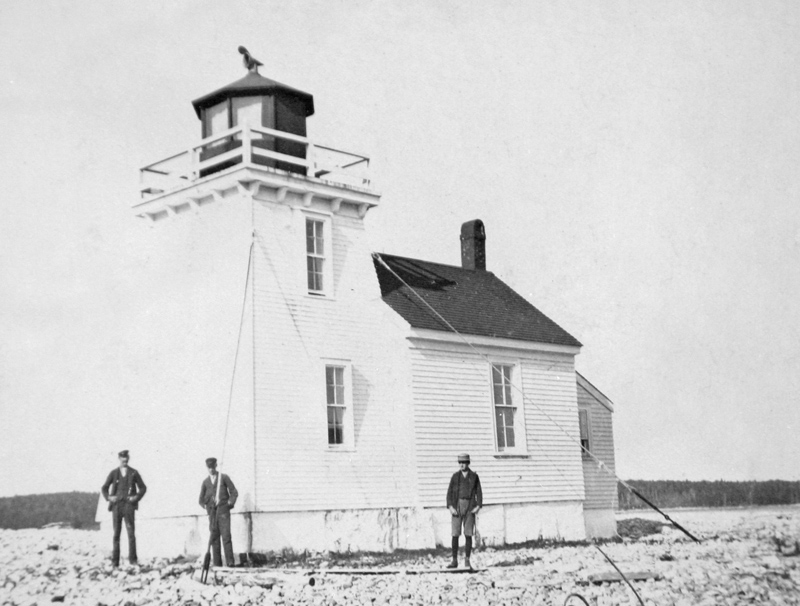 Port Hebert, also known through the years as Port LHebert and Port Le Herbert, has been called a narrow indentation, roughly nine kilometres long, on the southeast coast of Nova Scotia. Granite Village is found at the head of the indentation, while the small community of Port Hebert is located on the eastern side of the indentation, about three kilometres from the Atlantic Ocean and opposite Shingle Beach. Port Hebert is pronounced in three different ways by locals and other Nova Scotians: Port Le HERbert, Port Le Hebert, and Port Le BEAR.

In 1872, G.S. Parker was paid $469 to construct a lighthouse on Shingle Beach, and $91.80 was expended in procuring lamps. This square, wooden tower was painted white and stood twenty-nine feet high. The fixed-red, catoptric light was placed in operation on September 10, 1872.

The following report on the station appeared in the Annual Report of the Department of Marine for 1874:

A wooden lantern 6 feet 4 inches in diameter, protected with iron floor and zinc lining, having eight sides 7 feet high, and glazed with plate glass 36 x 30 inches. The north-east side is dark, and the lighting apparatus consists of one mammoth flat-wick lamp with 20-inch reflector, and three A lamps with 12-inch reflectors; one spare lamp being kept on hand. The consumption of oil for the last year was 91 gallons. The light was inspected on 4th May, and 87 gallons delivered. Two iron tanks are provided at this station.

The light-house, which was erected in 1872, and with the exception of some slight leaks is in good condition, consists of a tower only, the keeper living in his own dwelling, about 200 yards distant.

Mr. Martin Lisk was appointed keeper in May, 1872, and he states unless his salary, at present $100 per annum, is raised, he must resign his position.

It is unclear if the pay of Keeper Lisk was increased, but he remained at the lighthouse until his death in 1877, at which time Joseph McDonald was placed in charge of the light.

In 1883, a want very long felt at the station was supplied by constructing an addition to the tower to serve as a keepers dwelling. Keeper McDonald resigned in 1892, and Watson Burgess was appointed keeper in his place.

Watson Burgess served as keeper from 1892 until his death in 1921 at the age of sixty-six. His wife Phoebe took charge of the light for a few months after his passing, but new keepers were listed the following year. In 1908, Port Hebert Light was improved by the substitution of a sixth-order lens for the catoptric illuminating apparatus previously used.

The wooden lighthouse remained standing through at least 1960. Today, a skeletal mast with a red-and-white, rectangular daymark that has a red triangle in the centre displays a flashing red light on Shingle Point.

For a larger map of Port Hebert Lighthouse, click the lighthouse in the above map.

The modern tower can be viewed from Port Hebert.