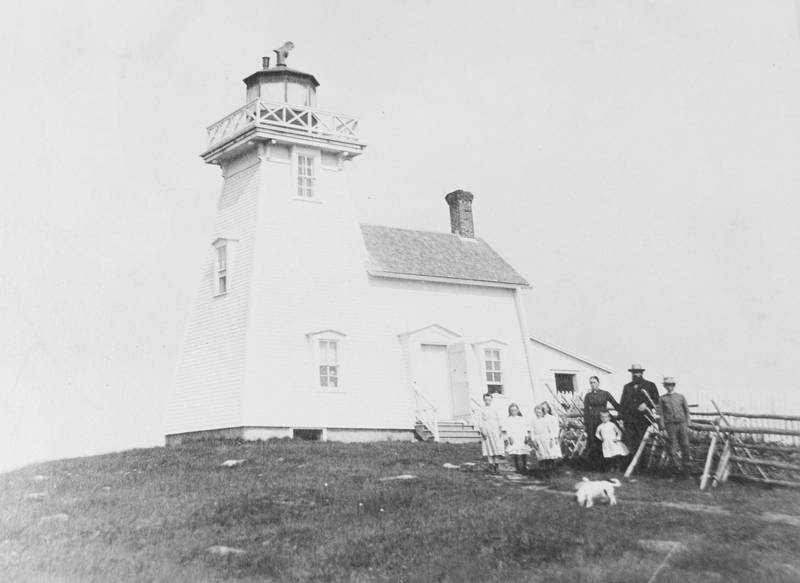 Croucher Island is the outermost and largest of three islets, which lie off the entrance to Head Harbour, at the head of St. Margarets Bay. The other two islets in the trio, which are nearly linked together by shoals, are Wood Island and Strawberry Island.

In 1882, Charles A. Smith of Lunenburg received a $1,535 contract to construct a lighthouse on Croucher Island, and the government published the following notice shortly before the light was to become operational:

Notice is hereby given that a lighthouse, erected by the Government of Canada on Croucher Island, St. Margarets Bay, in the County of Halifax, and the Province of Nova Scotia, will be put in operation on the first day of January, 1883.

The light will be fixed white, elevated 90 feet above high-water mark, and should be visible 15 miles all around the horizon. The illuminating apparatus is dioptric of the sixth order.

The building is of wood, painted white, and consists of a square tower 40 feet high from its base to the vane on the lantern, with keepers dwelling attached.

The lighthouse stands upon the highest part of the island, about 250 feet from its southernmost point, and the light is intended as a general guide up St. Margarets Bay.

George A. Croucher was appointed keeper of the new lighthouse at an annual salary of $250. George was twenty-seven when he became keeper, and he and his wife Emma raised seven children on the island. George retired in 1922 at the age of sixty-six, and Wentworth Boutilier took charge of the light later that year.

Wentworth Boutilier served with the eighty-fifth Nova Scotia Highlands during World War I. After being stricken with leg trench from serving in muddy bunkers and holes, Wentworth spent the last part of his service in a military hospital and then returned to Nova Scotia in May 1919. By 1922, he had purchased most of Croucher Island, so it was a natural candidate for the job of keeper. Wentworth married his wife Maggie in 1918 before going to war, and when they moved to the island in 1922, the couple had two young children.

Wentworth had told Maggie that they would try life at the lighthouse for one year, and then quit if it didnt work out. The Wentworths ended up spending twenty-two years on the island and raised their five children there. Maggie wrote a book about their time on Croucher Island. She wanted to call it My Island of Dreams, but when the book was finally published in 2003, seventeen years after Maggies death, it was entitled Life on Crouchers Island. Maggies daughter Geraldine explained that her mothers title for the book was because thats all she had. There was no hope.

My father kept [the] lighthouse on Crouchers Island for a little over 22 years and he wouldnt have been able to do it if my mother hadnt been such a wonderful help to him! Its not just keeping the lighthouse. You have to make your gardens and if you want flowers, you make a lovely little flower garden, which my mother did. We [had] a little nook where we had swings and hammocks. Dad made an apple orchard and he built two hen houses and a barn and a workshop.

I often heard [my mother] say she was there seven months before she had her first trip off of the island. She said there were times she wondered is this going to be it? It seemed so long and lonely [out there]. But after we children got older, she taught us to row the boat. She used to take us just off the shore and we would fish  wed get perch, flatfish. Every now and then wed get one of those hideous sculpins!

Fred Hiltz was the [lighthouse] inspector and I remember him sayin to Mum How do you keep [the lighthouse] lookin like this with all these children? Then he says Youre teaching them to knit and sew and embroider?!

By being on the island, we learned a lot of things that other children wouldnt learn. We learned about gardening and how the soil has to be manured to make the seeds grow. We grew peanuts one year! And watermelons one year! To us, this was the normal way of living and growing. Mother taught us so much. In our embroidery work, Mother bought little squares of stamped white material and the first quilt Ethel and I did, we did with all red embroidery floss. We got first prize on it at the exhibition!

In 1944, Wentworth and Maggie retired to Indian Point, on the east side of St. Margarets Bay. A few months after Maggie died in 1986, her son Bert wrote the following tribute for a local paper:

On the island, everything ran by Norwegian Steam. In their twenty-two-year stay on the island, no draught animal or motorized device ever moved a pound of the tons and tons of supplies that were carried, wheeled or dragged up the steep hill to the lighthouse. But Maggie B. did! A robust woman, she was capable of shouldering a hundred-pound sack of stock feed and carrying it up the hill.

Today, a triangular, skeletal mast, fitted with a red-and-white, rectangular daymark, displays a flashing white light on Croucher Island. Little evidence of the old lighthouse or human habitation remains on the island. Years after leaving Croucher Island, Geraldine and Bert returned to explore their island home. It was the worst mistake we ever made, she later said. Where was Crouchers Island? What happened to it? All the land that Dad had in apple trees was nothin but a heartbreaker to see. And Mums garden and the nook  nothing left.

There was one reminder of the Boutilier familys time on Croucher Island  a single white rose in bloom. It was Dads rose bush. Sir Thomas Pilton was the name of it, Geraldine explained. Oh! It turned us sick to go back there!

For a larger map of Croucher Island Lighthouse, click the lighthouse in the above map.

The modern tower on Croucher Island is best seen from the water.