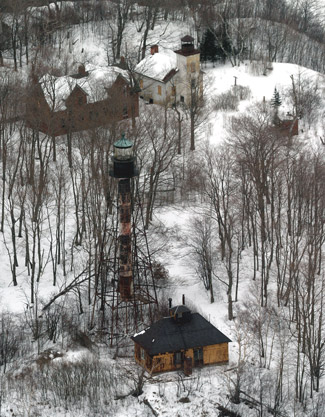 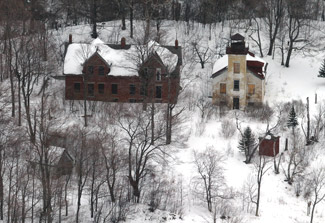 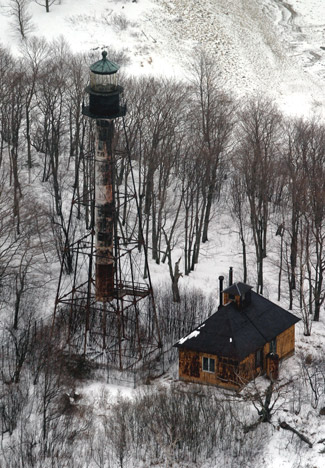 The Fox Islands consist of two islands, North Fox Island and South Fox Island, separated by four miles and located between Beaver Island to the north and the Manitou Islands to the south. In 1866, the Lighthouse Board wrote, The necessity for a light-house with fog-signal which should be located at the extreme southeast end of the South Fox island has long been felt. Vessels sailing north from Chicago to the Straits of Mackinac in westerly winds often hugged the western shore of Lake Michigan until reaching Baileys Harbor on Wisconsins Door County Peninsula, from where they would sail across Lake Michigan, passing between South Fox Island and North Manitou Island. A light on South Fox Island would allow mariners to make the crossing at night and would also mark the protected anchorage in the lee of the island, which was useful in northeast gales. On March 2, 1867, Congress appropriated $18,000 for a lighthouse on South Fox Island. The federal government already owned a portion of the desired parcel on the southeast tip of the island, and another 105 acres were purchased from the State of Michigan for $421.86. Built during the summer and fall of 1867 using Milwaukee Cream City brick, the lighthouse consisted of a square, forty-five-foot-tall tower affixed to one end of a one-and-a-half-story keepers dwelling. A fourth-order, L. Sautter & Co. Fresnel installed in the towers decagonal lantern room had two bulls-eye panels and revolved to produce a fixed red light, punctuated every two minutes by a red flash. Keeper Henry J. Roe exhibited the light the first time on November 1, 1867. The position of first assistant was added to the station in 1871.

In 1890, the Lighthouse Board requested $5,500 for a steam fog signal for South Fox Island as shoals in the middle of the passage between the lighthouse and North Manitou Island forced mariners to sail near the station. The funds were finally provided on March 2, 1895, and a ten-inch steam whistle was placed in operation on December 10 of that year. The fog signal plant consisted of duplicate boilers with Crosby automatic signals housed in a frame building, measuring twenty-two by forty feet and covered on the outside by corrugated iron. The walls between the studs were filled with a sawdust and lime filling, and the fog signal equipment rested on a concrete floor. A brick oil house, with an iron door and roof was also added to the station at the same time to store the volatile kerosene that replaced the lard oil formerly used in the light.

Water for the fog signal was extracted from the lake using a water supply crib until 1898, when a well was dug and curbed, and a pump house was built over it. To provide housing for the additional two keepers needed to help run the fog signal, a five-room frame dwelling was built in 1898. A larger red brick dwelling was built for the keepers in 1910. A typical year for the fog signal was 1900, when it was in operation for 277 hours and consumed about five tons of coal and forty-one cords of wood. As it took about an hour to build up the necessary ninety pounds of pressure to sound the whistle, the keepers had to be good at predicting the weather.

Although it was not their primary responsibility, the keepers at South Fox Island kept an eye on the surrounding waters and were quick to render assistance to those in need. Several rescues made by Keeper James McCormick and his assistants were noted in Lighthouse Service records. In 1916, Keeper McCormick and an assistant pulled a disabled boat with three men aboard off the island and towed it to a fishing tug. Three years later, three of the stations keepers towed a disabled boat to the station and repaired its propeller, but the big year for Keeper McCormick and his assistants was 1921. During that year, they towed a fishing tug to Northport, hauled the wrecked fishing tug Emma S. Olson to shore and helped remove its engine, and prevented the launch Aida from going ashore in a storm.

In 1922, the lighthouse tender Hyacinth was tasked with delivering motor boat No. 63 to South Fox Island. On October 24, the tenders launch, under the command of First Officer George K. Brown, was towing the motor boat to shore, when the launch wrecked in the breakers, resulting in the drowning of the first officer. Keeper McCormick and his assistants made a heroic effort to reach the wreckage and save the rest of the crew.

To improve the visibility of South Fox Island Lighthouse, its illuminant was changed from oil vapor to electricity in 1929. That same year, the fog signal building was rebuilt and a Tyfon fog signal, with duplicate air compressors and a gasoline-engine-driven electric generator, was installed therein.

Another significant change to the station came in 1934, when a discontinued skeletal lighthouse on Sapelo Island, Georgia was dismantled, shipped to South Fox Island, and erected next to the stations fog signal building. The light atop the new tower produced a white flash every thirty seconds, and its focal plane was 129 feet above the lake, sixty-two feet higher than that of the old lighthouse. A catwalk connected the base of the tower to the top of the fog signal building.

The fog signal on South Fox Island was discontinued in 1954, and in 1958, Allen P. Cain, the lights last keeper, left the island after the light had been fully automated. The automatic light functioned for a decade before being discontinued in 1968.

In 2002, the station logbook that covered the last five years of its operation was in the possession of Hugh Bilyea, whose wife got it from Allen Cain, her uncle, after he retired. Its the most boring thing youll ever read, Hugh said. The wind was always blowing. And all they did was paint. The following entry, one of the longer ones, described March 27, 1953, opening day of the season: Arrived at Station by Charlevoix Picket Boat at 12 noon, put lights and water in operation. NW wind. A few terse entries, such as Beautiful sea and Northern lights, do seem to indicate that Keeper Cain enjoyed the surroundings.

The southernmost 115 acres of the island were transferred to the Michigan Department of Natural Resources (DNR) in 1971 for public parks and recreation use. The first effort to preserve the abandoned property occurred during the summer of 1984, when Bradley Boese took a youth group to the island under the direction of the Traverse Bay Area Intermediate School District and the DNR. In 2002, Bradley Boese and Cathy Allchin formed the Fox Island Education Association (FIEA) with the goal of preserving the light station. Three years later, two board members of FIEA launched the South Fox Island Lighthouse Restoration Project to revive the preservation plans, and the groups name was shortened to Fox Island Lighthouse Association (FILA), when it applied for non-profit status in 2005.

Since 2006, FILA has been making several trips to South Fox Island each year and has succeeded in calling attention to the light station and in stabilizing many of the structures on the island. In 2009, the association received $16,666 from the Michigan Lighthouse Assistance Program, which is administered by the State Historic Preservation Office and funded by proceeds from the sale of the Save our Lights license plate. FILA initiated a Camper Keeper Program in 2015 that allows people to camp on the island for several weeks while welcoming the occasional visitor and helping with maintenance and restoration.

The lighthouses are located on South Fox Island, which is roughly midway between Beaver Island and the Manitou Islands.
Latitude: 45.3798, Longitude: -85.8361

For a larger map of South Fox Island Lighthouse, click the lighthouse in the above map.

These lights must be seen by boat or from the air. Fresh Air Aviation offers Lighthouse Air Tours that allow aerial photographs of these lighthouses, and Bonadeo Beaver Island Boat Charters offers boat tours to the lighthouses.

The lighthouses are owned by the Michigan Department of Natural Resources. Grounds open, dwellings/towers closed.


As South Fox Island is one of the most remote islands in Lake Michigan, you would think that you would be surrounded by wilderness and far from modern conveniences. Such is not the case, as David V. Johnson, Chairman and CEO of Victor International and developer of Bay Harbor, owns two-thirds of the island and has built a landing strip and lodge complex just north of the lighthouse. Around 2000, Johnson proposed a land swap with the state that would have resulted in both parties' property being more contiguous. As part of the deal, Johnson would have also received ownership of the light station property, which he would have restored. A recrafted land swap was approved in 2001, with the state retaining ownership of the 115 acres on the southern end of the island. The lighthouses would have likely been in much better condition had the original land swap gone through, but at least the public still has access to the property.

At the urging of the DNR, Johnson acquired North Fox Island in 1994 to prevent the construction of 500 residential units, a golf course, and a harbor on the island. Two years later, Johnson sold the island to the state so it could be preserved.