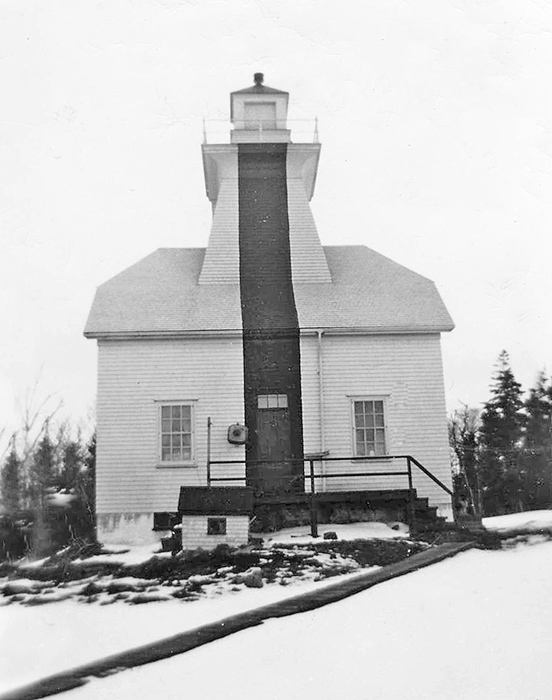 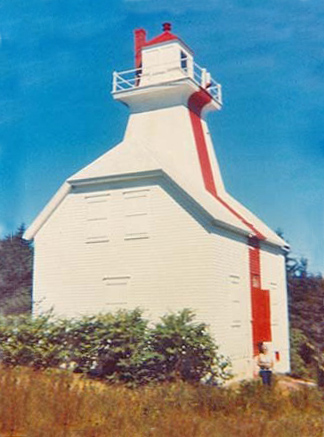 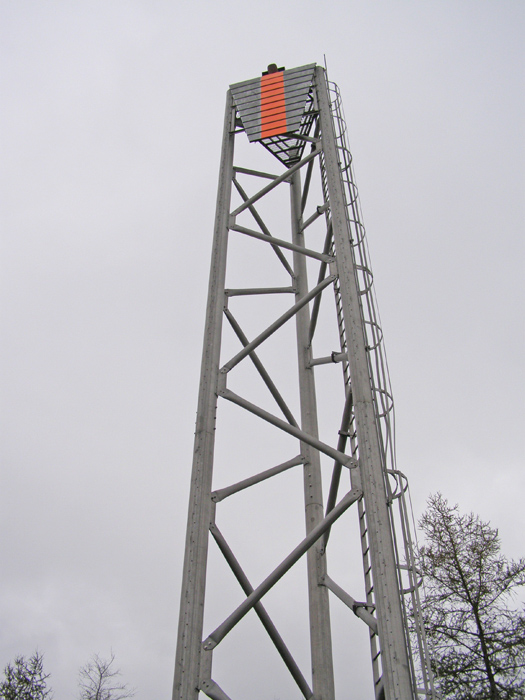 A light was activated atop an existing Martello tower on McNabs Island in 1828 to guide mariners into Halifax Harbour. This lighthouse, situated on Maugher Beach, served for over a century until a concrete tower was built to replace it in 1941.

In 1903, a second light on McNabs Island, positioned north of Maugher Beach Lighthouse, was placed in operation to function as a rear light to the one on Maugher Beach. Once mariners positioned their vessels so that these two lights were positioned one on top of the other, they could follow this alignment to safely enter Halifax Harbour. The activation of McNab Island Lighthouse to serve as a rear range light was one of several changes to the lighting of Halifax Harbour that were announced by the following Notice to Mariners:

The Government of the Dominion of Canada has given notice that, on 31st March, 1903, the undermentioned alterations and additions to the lighting of Halifax Harbour would be made without further notice:

McNabs Island lighthouse was erected near the northwest end of McNabs Island, roughly one-third of a mile from the south point of Finlay Cove. Day labour was used to build the lighthouse at a cost of $3,578, and James Doody was hired as the first keeper of the light at an annual salary of $360. Prior to becoming keeper of McNabs Island Lighthouse, Keeper Doody had been in charge of Maugher Beach Lighthouse for seven years.

Matthew Lynch replaced Doody as keeper of McNabs Island Lighthouse in 1905 and served in this role until 1932 when Colin W. Cleveland was appointed keeper.

In 1906, a five-foot-wide, vertical stripe was painted on the seaward side of McNabs Island Lighthouse, from the lantern deck to the ground, to make the previously all-white structure more conspicuous when snow was on the ground.

Before becoming keeper of McNabs Island Lighthouse, Colin Cleveland had worked as a fisherman for many years out of Southwest Cove before taking a job at a sugar refinery in Dartmouth. After one year at the refinery, Colin fractured his jumping off a shelf and was let go because he could no longer perform his duties. Colin and Jennie Cleveland had five kids and no job, when they heard about an advertisement for a lighthouse keeper on McNabs Island. He applied for the position and was offered the job, partly because he was a World War I veteran.

During the winter of 1932, the Clevelands moved to the island with their five children and started a new life. Two more children were born while the Celevelands lived on McNabs Island, including a daughter named Faye. Faye recalls that when her older sister Belle was living on the island, while her husband was fighting overseas in the war, she went into labour. Fayes oldest brother Lester, who was in the marine division of the air force and assigned to the Elaine W. out of Eastern Passage, trudged over a mile in a snowstorm to Garrison Pier and used the emergency telephone there to call his captain. The Elaine W. was promptly dispatched to take Belle to the hospital in Halifax. Belle named her baby Elaine after the vessel that had taken her ashore.

Colin Cleveland was paid seventy dollars a month, with five dollars of this amount being retained as a superannuation payment. To help make ends meet, the Clevelands kept two cows, some pigs, and a flock of hens on the island. During one winter, they ate a cow, a pig, and forty hens. Keeper Cleveland would also catch fish to supplement their diet.

Oil lamps were used for light inside the lighthouse, and coal and wood stoves were employed in the kitchen and two other rooms for heat. Still, the lighthouse was a cold place in the winter. Faye recalls that in the winter, they would take a sheet of newspaper, fold it in half, cut a hole in the middle and place it on top of the stove. When the paper got warm, they would run like the dickens to the outhouse, and plunk down the newspaper so they would have a warm seat.

A 2,000-gallon cistern in the basement of the lighthouse held water that could be pumped up by a hand pump in the kitchen for washing and cleaning, while drinking water was carried in from a well, that would often go dry in the summer.

Thirty-eight stairs led up to the light atop the tower, with the last fourteen steps being nearly vertical. When Mrs. Cleveland first climbed the tower, she was almost too scared to go back down. She suffered two falls on the stairs in the lighthouse during her years at the lighthouse, one of which resulted in her fracturing her collar bone and shoulder.

For Keeper Clevelands first five years at the lighthouse, three lamps set in eighteen-inch reflectors were used to produce the navigational light, but after mariners complained about the power of this light, a single Aladdin lamp with one large reflector was installed in the lantern room to produce a fixed, red light. This more powerful light required extra vigilance as it was prone to catch fire.

One night, a noise awakened Mrs. Cleveland. She soon realized the lamp must be on fire and awakened her husband, who pulled on his pants and raced up the steps in his bare feet. An inferno greeted Keeper Cleveland at the top of the stairs. The intense heat shattered the glass in the lantern room and caused the oil in the lamp to boil. Mrs. Cleveland also roused Lester, and he took a fire extinguisher up to the lantern room and managed to put out the fire.

Schooling their children was always a challenge while the Clevelands were on McNabs Island. At first, Keeper Cleveland would row them to Imperoyal so they could attend school there. A school was later established on the island to serve the Clevelands and others who resided there, but it was not easy to retain a teacher. The younger Cleveland children later attended school in Halifax and finally at the Shearwater Naval Base.

Attending church regularly while on the island was also problematic. In the 1950s, Reverend Fred Moore of St. Albans Anglican Church in Woodside would bring a choir out to the lighthouse a couple of times a year. On one occasion, after climbing to the top of the lighthouse, he remarked, Now I have seen the light.

The Clevelands left the lighthouse in 1957, after twenty-five years on the island. Two years later, the light was electrified, and the station de-staffed. A skeleton tower replaced the wooden lighthouse in 1973, and a few years later, the old lighthouse was torn down. Today, two triangular, skeletal towers, located near the site of McNabs Island Lighthouse, serve as Halifax Harbour Middle Range Lights.

For a larger map of McNabs Island Lighthouse, click the lighthouse in the above map.