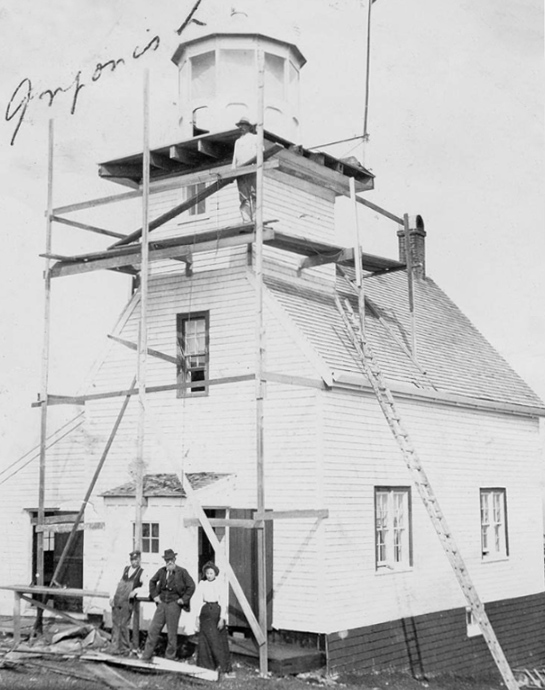 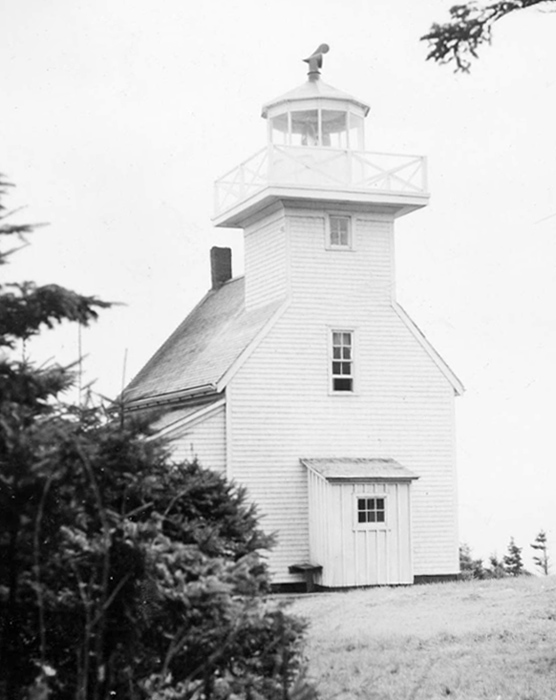 Ingonish, which is located at the eastern gateway to Cape Breton Highlands National Park, is made up of five small communities that lie along the Cabot Trail. From south to north, the communities are Ingonish Ferry, Ingonish Harbour, Ingonish Beach, Ingonish Centre, and finally Ingonish. Ingonish Island lies roughly 900 metres offshore from Ingonish, and in 1871, a lighthouse was activated on the eastern side of the island to guide mariners along this stretch of the coast.

Jacob Bowser was awarded a $1,700 contract to build the lighthouse, which consisted of a rectangular one-and-half-storey dwelling with a square tower rising from one end. Several of these church-like lighthouses were finished in Nova Scotia in 1871, including ones at Apple River, East Ironbound Island, Main-à-Dieu, and Pugwash, but the one on East Ironbound Island is the only one that remains standing. The total cost of the lighthouse came to $2,420.47.

Samuel C. Campbell was hired as the first keeper of Ingonish Island Lighthouse at an annual salary of $300. He first exhibited the fixed-white light produced by a fifth-order Fresnel lens on August 1, 1871. Keeper Campbell had previously been in charge of the humane establishment on St. Paul Island, located in Cabot Strait, roughly sixty kilometres north of Ingonish Island, and when the man who took his place there retried in 1874, Campbell was placed in charge of both lighthouses and the humane establishment on St. Paul Island. His salary doubled as a result of his added responsibilities. Lauchlan McDougall replaced Campbell as keeper on Ingonish Island.

Modifications were made to Ingonish Island Lighthouse in 1874 to accommodate a larger lantern room, after the original one was found to be much too small. The top four-feet of the tower was cut off, and a new lantern room deck was built that was two feet wider on each side. The new ten-sided, iron lantern room had a diameter of seven-and-a-half feet and sheltered two circular-burner lamps with 18-inch reflectors, and four mammoth flat-wick lamps with 18-inch reflectors instead of the former Fresnel lens. The following changes were also made at the same time:

The keepers dwelling is attached to the light-tower, besides which there is an oil store 12 x 16 feet; there is also a shed attached to the dwelling used for a woodhouse, this was raised about four feet higher than it was, and 12 feet additional put to it, making it now the whole length of the building, and a good stone foundation was put under all; the position of the oil-store was altered, and a stone foundation built under it; all new works received two coats of paint and the old work one. The whole of the foundation of the light-house was covered in with 1 ½ inch grooved and tongued ceiling, all plastering within the building was made good, and the water tanks cemented inside and out. Four iron stays have been sent for securing the light tower, and will be put up immediately. A boat about 12 feet long has been provided.

In 1953, the Department of Transport decided to build a new light tower and keepers dwelling for Ingonish Island rather than repair the eighty-two-year-old, wooden lighthouse. During 1954, a small, one-and-a-half-storey dwelling was built near the old lighthouse, and a short tower topped by a metal lantern room was built a short distance to the east for the light. The new lighthouse used a long-focus reflector with a 55mm vapour burner as its light source instead of an oil lamp.

Keeper Richard Nolan lit the vapour burner in the lighthouse for the last time on November 12, 1967. After this, a battery-operated light was placed in the tower, and the station was de-staffed. On October 20, 1987, the light on Ingonish Island was extinguished for good after being declared redundant. Ownership of the lighthouse property was transferred to Parks Canada in 1974, but little has been done to save the structures on the island even though it has been declared a National Historic Site.

The 1954 keepers dwelling and light tower can be seen in the video on this page that was shot in 2015.

For a larger map of Ingonish Island Lighthouse, click the lighthouse in the above map.

Ignoish Island can be seen from Ingonish, but the dwelling and tower are on the east side of the island and not visible from Cape Breton.