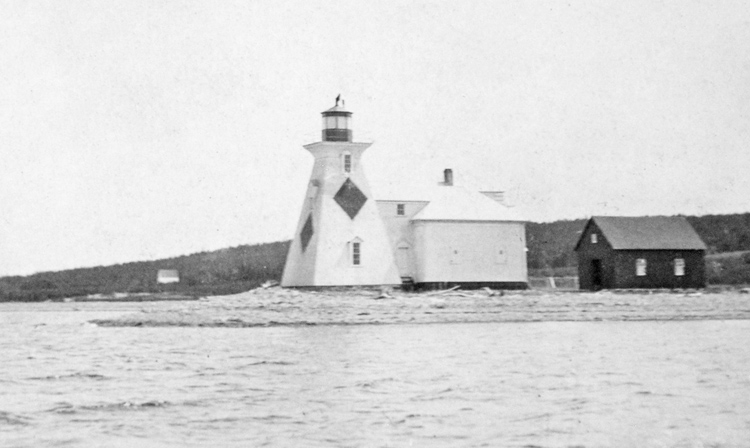 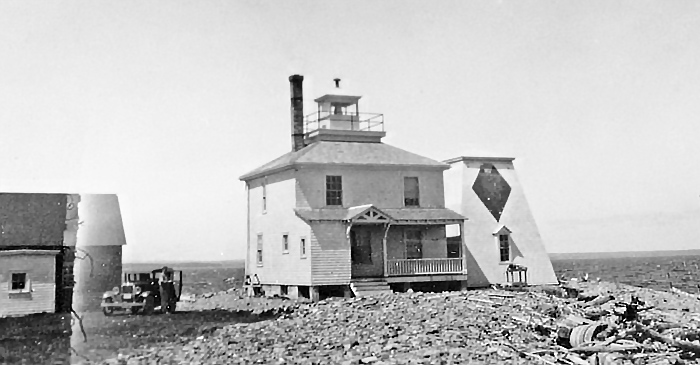 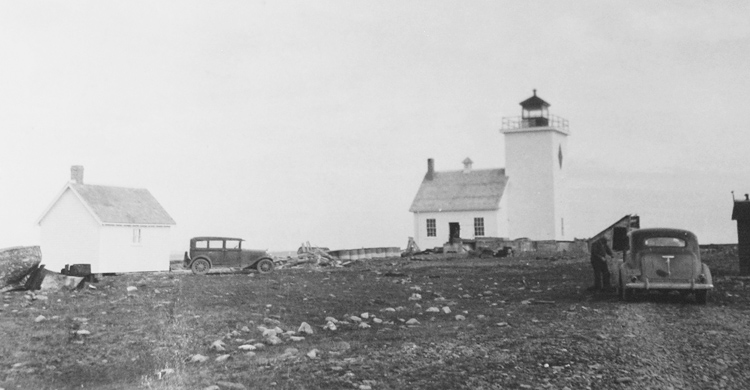 Canso Strait, also known as the Gut of Canso, separates Cape Breton Island from the Nova Scotia mainland. The narrow, roughly twenty-five-kilometre-long passage links Chedabucto Bay in the Atlantic Ocean with St. Georges Bay in Northumberland Strait, a sub-basin of the Gulf of St. Lawrence. North Canso Lighthouse was built on the west side of the northern entrance to Canso Strait in 1842, and in 1851, work began on a beacon at Sand Point, to mark the southern entrance. The contractor who undertook the work on the lighthouse failed to complete the lighthouse in 1851, so the light was not placed in operation until 1852.

Sand Point, as its names implies, is a sandy point, which is situated at the western side of the southern entrance to the strait. As the point is low-lying, it cannot be seen from more than two miles away, and to make matters worse, a spit of sand and stones extends 500 yards to the northeast and causes a rippling in the tidal current off the point.

The first lighthouse was a square building, painted white, that had a three-sided bow window in both its eastern-facing and western-facing roofs. From these two windows, too lights were shown to the north, two to the south, and one each to the east and west. A large black diamond was painted on the southern side of the lighthouse so mariners could easily identify the structure during daylight hours.

Joseph Mundell, who was the keeper in 1857, asked that an out building be constructed at the station to store oil and other supplies for the lighthouse. As it was, Keeper Mundell had to store the oil in his own out building at a considerable distance from the lighthouse, and the wood he gathered to burn for heat, was often washed off the beach by high tides.

In 1893, work began on a new modern tower that would be fitted with a more powerful illuminating apparatus. T.M. Crowe of Truro, Nova Scotia, built the new tower and attached it to the eastern side of the old lighthouse for the sum of $800. The new light was placed in operation on January 1, 1895. Around the time this new light became active, Sand Point started to be referred to as Eddy Point in government documents, perhaps to distinguish it from other Sand Points in Nova Scotia and nearby provinces.

In 1928, a one-and-a-half-inch diaphone fog alarm plant was placed in a building attached to the lighthouse, and then the following year, a new combined dwelling and lighthouse was built, and the older tower was cut down one storey. W.M. Gerrior built this new lighthouse, which consisted of a square, two-storey dwelling with a lantern room centered on its roof, for $5,750.

In 1937, fire destroyed the lighthouse that had been built in 1929, necessitating the construction of a fourth lighthouse to mark the point. This incarnation consisted of square tower, with vertical walls, that was attached to a one-and-a-half-storey fog alarm building. A two-storey dwelling was built nearby for the keeper.

After the causeway across Canso Strait was completed in 1955, studies found that tides at Eddy Point were roughly twenty-eight centimetres higher than they were before. These higher tides coupled with the fact that contractors had removed large quantities of gravel made Eddy Point susceptible to flooding. One keeper described conditions at some point after the causeway was finished:

A big storm swept away the northern beach and cut a gap through it approximately six metres wide and 1.5 metres deep. The gap extended through the road and into Mundell Pond and widened each high tide. The whole point was flooded to one metre deep over the whole road at high tide and the basement was flooded. It was only possible to get across with hip boots at low tide. The car was marooned at the lighthouse and the telephone line broke at the gap and all lines in the immediate area out of service. The children not able to attend school if high tide occurred in the morning and on the other hand if high tide was in the afternoon, they couldnt get home. The standy engine was out of order and if there was a power failure the fog alarm would also not be in operation.

The station was reduced to a one-keeper operation in 1977, and was de-staffed in 1979, after remote monitoring of the light was possible from the Coast Guards nearby Eddy Point Traffic Centre. In 1988, a concrete slab was poured over the foundation of the stations dwelling, which had been sold and removed from the station, and a white, circular, fibreglass tower was bolted to the slab. The lighthouse built in 1938 was to be demolished by the contractors who installed the fibreglass tower, but due to public interest, the old lighthouse was spared for some time.

In 2003, the Coast Guard removed the fibreglass tower from Eddy Point established a pair of range on the point to help guide mariners through Canso Strait.

For a larger map of Eddy Point (Sand Point) Lighthouse, click the lighthouse in the above map.

The modern range lights can be seen at Eddy Point today.