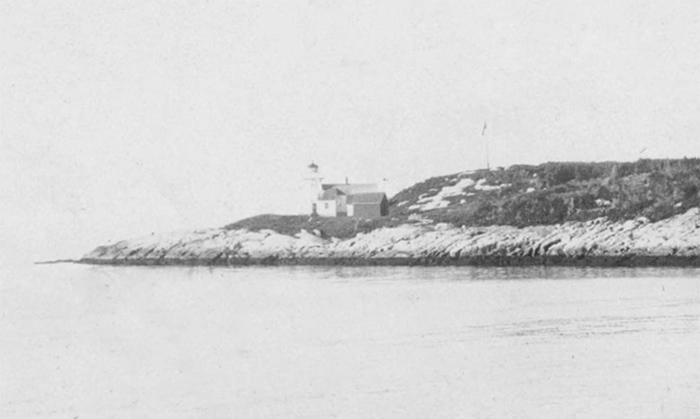 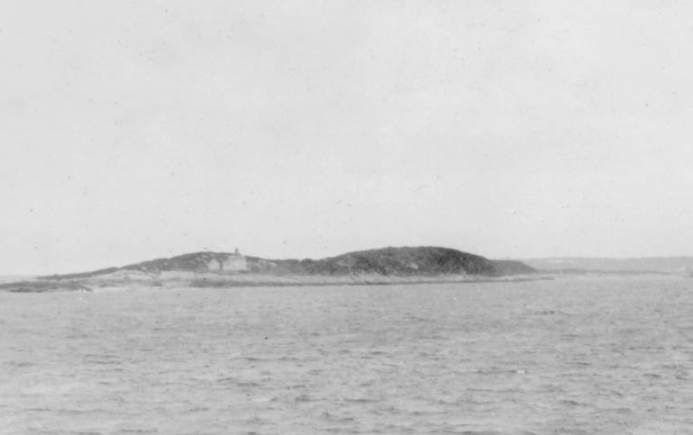 A lighthouse was established on White Head Island in 1854 to serve mariners sailing along the coast of Nova Scotia just south of Canso. While the light served primarily as a coastal light, it was located just offshore from Whitehaven Harbour, which is commodious but difficult of access.

In 1879, the Department of Marine announced the completion of a lighthouse on Three Top Island that would better mark Whitehaven Harbour:

During the past season a Lighthouse has been erected on Three Top Island, Whitehaven, Guysboro County, and was put in operation in September last. The building is of wood, and consists of a square Tower, 32 feet high, with Keepers dwelling attached. The Light is fixed white catoptric, elevated 48 feet above high-water, and should be seen at a distance of 11 miles. This Light is for the purpose of guiding vessels into Whitehaven, and in order to point out the dangers on the northern side of the western passage is obscured when bearing to the eastward of N. E. by E. The contract for this Lighthouse was awarded to Mr. Thomas ONeil of Salmon River, Guysboro, for the sum of $1,097. The sum of $853.21 was expended on the work during the past fiscal year, and further expenditure will appear in the accounts of the present year.

Three Top Island, located one mile northwest of White Head Island, is easily identified by its three remarkable hillocks, each fifty to sixty feet high, that gave rise to the islands name.

In 1883, an addition was made to the lighthouse to provide more space for the keeper and his family. In 1888, a new porch was built for the lighthouse, and an iron tank was placed in the cellar to store water. A boathouse and slip were built at the stations landing in 1893. In 1895, the roof of the kitchen was raised on one side to give it more pitch.

William L. Munroe was hired as the first keeper of the lighthouse at an annual salary of $200. After having served as the keeper for thirty-two years, he penned a letter in December 1910 to the editor of the Eastern Chroncile in which he described some remarkable events during his service and concluded by saying he believe he merited superannuation when he gave up keeping the light in the near future.

In his letter, Keeper Munroe gave the following account of a dramatic rescue he made:

It was on a Christmas eve about 16 years ago, if I remember right. There was a heavy gale a raging from the NE, with snow and the temperature was at zero. My three eldest daughters were on the mainland at the time attending a concert at the Methodist Church. The small children had retired early in the evening as usual. My wife and I went to bed about half past ten oclock after seeing that Santa Claus was to visit the island, and I suppose we had been retired about 20 minutes and I had about fallen to sleep, when my wife aroused me by telling me that she heard a horn blowing. I told her she was dreaming, to go to sleep; but to please her I got up and went to the door to investigate. I found to my horror that she was right, for there on the reef that extends SE away from the mainland about two hundred yards, lay a stranded vessel and they were blowing horns and shouting for their lives for the keeper to save them, as they thought from the way their ship was pounding she would break up, and certainly they would be doomed under such circumstances.

Well, my man being ashore to spend his holidays of course left me alone. I dressed and went to the cliff, as near as I could venture and shouted as loud as I could as I could not attempt it until daylight. Well I don't suppose they could hear me, but dear; their wailings were terrible to hear on such a night. And again I went and shouted to them to take their own boat and I would guide them by a torch. Well, again they could not hear me, as they kept up their wailings. I could hear the wind whistling in the wreck, but I leave that to one's imagination, what it sounded like, together with their shoutings to save them.

Well I went to the house and told my wife that in God's name I would try and launch a boat and go off to the wreck, and of course, as usual with women, my wife crying and begging me not to dare such a thing on such an awful night, and the children awakened by the tumult to make matters worse joined their Ma in begging me not to go, and I was pretty near abandoning the idea altogether until daylight.

Well, I went out of doors and down to the cliff, and by the way their shoutings seemed to me, I imagined there were at least some of them in the water, and perhaps drowning. And then I said to myself I am going to try it anyway and if I get lost it will be in a good cause trying to save my fellow men. Well, I lit a fine torch, or flare up, as some call them, and my wife following me, I went to the slip and let the boat down, as far as I dared. the sea was coming up by times half way to the slip. As the gale was blowing fair on it was so much the worse to get clear. I was about to run down and after lowering her and did unhook the boat [when] there came a heavy sea and swept the boat clear of me just as I was in the act of leaping into her. She turned completely bottom up. Well, that pretty near discouraged me. However, I had another boat in the store that I had stowed away since the past summer not intending to launch her until spring lobster fishing. To her I ran and got her on the slip but having only one pair of oars left, it was risking losing two pairs on the first boat. However, I let the boat down part way this time, put my oars in her, unhooked my tackle and sprung into the boat, taking chances going down the slip equal to loop the loop and landed safe in the boiling water made by the gale. I grabbed my oars and as skillfully as I could, managed my boat until I got out to the wreck, which I found to be the George P. Trigg from Charlottetown, P.E.I., bound to Boston, loaded with several thousand bushels of oats. She was trying to make the harbour to clear the storm when stranded.

They had lowered the boat when first she struck the ledge and lost the boat in the sea. I found the men very much frightened. They all wanted to get in my small boat at once, but I told them to do as I told them and I would try to land them. So I took three men at a time getting to the island. My wife held the torch and that was a great help to me. I backed the boat stern-first as near to the surf as I dared and told the men to leap which they did, and landed safe, and then I began another struggle for the wreck, which I gained after a hard fight and got the captain, mate and the remaining one of the crew. I dared not allow anyone to touch my oars by myself as I had only one pair and to break one we were doomed. However, I reached the island and landed safely, thank God, where we were all housed at 3 o'clock in the morning on Christmas Day.

The wreck presented a gloomy-looking sight in the morning. The top of the hull, which was above water, was a mass of ice, where no one could go near her for a couple of days.

Keeper William Munroe retired in 1912. Howard S. Munroe served as keeper for the next seventeen years, until William Feltmate took charge in 1929.

In 1927, a new lighthouse was built on Three Top Island in the form of a square, two-story dwelling with a lantern room centered atop its roof. This style of lighthouse was used at many stations throughout Nova Scotia in the early 1900s. The old lighthouse, minus its lantern room, was turned into a storehouse.

In 2020, a skeletal tower, situated where the lighthouses formerly stood, displayed a flashing green light on Three Top Island.

For a larger map of Three Top Island Lighthouse, click the lighthouse in the above map.

The modern light is best viewed from the water.