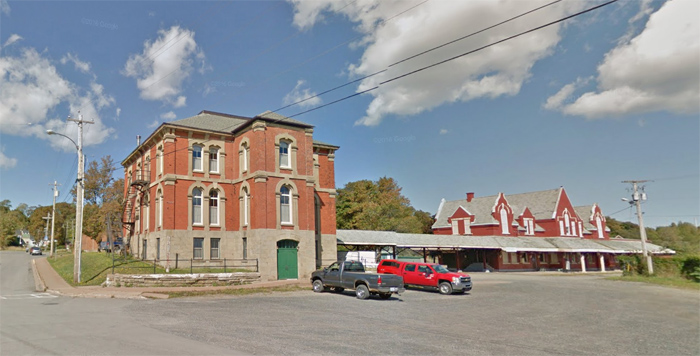 Pictou Bar Lighthouse, the first light to mark the harbour at Pictou, was built in 1833. This aid, faithfully kept by a string of keepers, served mariners by itself for years, until in 1878, the Department of Marine decided to add a second light that could be aligned with the lighthouse to indicate the proper course for entering the harbour.

In 1874, the sum of $10,000 was appropriated to help cover the cost of a customs house at Pictou. Halifax architects Stirling and Dewar produced the design for the two-storey Second Empire structure, which had a tower overlooking the waterfront. The new customs house just happened to be properly aligned with Pictou Bar Lighthouse, and the Department of Marine received permission to exhibit navigational lights from its tower. The departments report for 1878, provides the following information on the customs house:

A range light has been placed during last summer in the tower of the new Custom House, just above the railway station, in the Town of Pictou. It is a fixed white. The light is shewn by means of three argand gas-burners, each having 25 jets  two furnished with 15-inch reflectors, shews seaward, and one with a 12-inch reflector, shews across the harbor to southward.

The light bears W. ¼ N. from the harbor light, distant two miles, and is elevated 60 feet above high water, and has been seen 7 miles outside the bar in clear weather. In range with harbor light, bearing west, leads in the channel up to the bar.

The light is under charge of the keeper of the Custom House building.

In November 1904, the colour of the light exhibited from the east side of the customs house was changed from white to red. At the same time, electric incandescent lamps were placed in the foci of the reflectors in place of the gas lights previously used.

Numerous keepers were responsible for the light in the customs house. The longest-serving keeper was F. Elizabeth MacKenzie who cared for the tower light from 1935 until her death in 1951. She started at an annual salary of $100, but was making $315 a year at the time of her death in 1951.

Hurricane Edna caused extensive damage in Nova Scotia in September 1954, and its high winds destroyed the tower atop the customs house. A light was still exhibited from the customs house after the loss of the tower, as Mrs. Donald MacNeil served as keeper until resigning in 1957. After this, a caretaker looked after the light until at least 1959.

Today, the customs house is home to The Customs House Inn.

For a larger map of Pictou Customs House Lighthouse, click the lighthouse in the above map.

Take Caladh Avenue along the watefront in Pictou, and you will find the Customs House at the eastern end of the street.