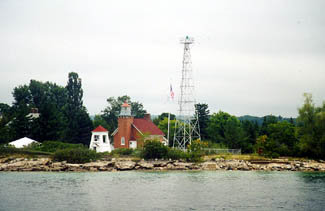 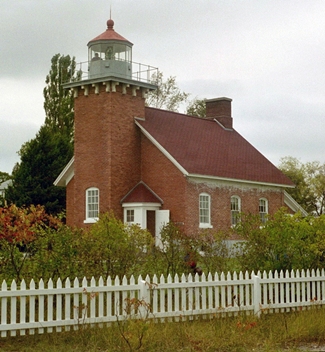 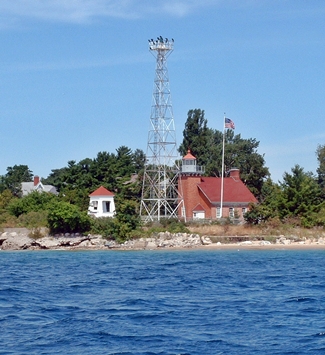 The harbor itself is excellent in every respect, easy of access, affording good anchorage, and a complete shelter from all winds.

A light-house of the fifth order, together with a fog-bell of 600 pounds, with Stevenss striking-apparatus will make the harbor available.

In addition to its relation to the general commerce of Lake Michigan, the harbor has some local importance. This is increasing and doubtless will continue to do so.

The proposed aids to navigation should be placed at the extreme end of the point, on the south side of the harbor, as indicated on the accompanying tracing, and would cost about $12,000, which sum, for the purpose indicated, I respectfully recommend be included in the next annual estimates.

It took over a decade, but Congress finally appropriated $15,000 for the lighthouse on August 7, 1882. After title to the desired parcel on Harbor Point was acquired, materials and workers were landed at the site on May 14, 1884. By the end of June, the twenty-inch-thick stone foundation walls were in place, the first-floor joists were laid, and the brickwork had been carried up to a height of two feet. The red-brick lighthouse, consisting of an eight-and-a-half-foot-square tower attached to the southern end of a one-and-half-story dwelling, was completed on September 18, and the light was exhibited for the first time on September 25, 1884. A fourth-order L. Sautter, Lemonier & Co. Fresnel lens, installed in the towers decagonal, cast-iron lantern room, was used to beam forth a fixed red light at a focal plane of forty-one feet above the bay.

In 1887, a forty-five-foot-deep, two-inch drive well was sunk near the dwelling to provide water via a hand pump. Four years later, the station was connected to the citys main, which provided a steady supply of water for domestic purposes and for protection against fire. A summer kitchen was added to the lighthouse in 1894.

Though a fog bell was mentioned in the original plans for the station, only a light was available to mariners until 1896, when a two-story, square, pyramidal, fog-bell tower, resting atop five brick piers, was erected. The lower portion of the tower was enclosed, and the 1,800-pound bell was hung in the open upper portion. Starting on June 1, 1896, the bell was struck a double blow every thirty seconds when needed. Prior to being installed at Little Traverse Lighthouse, the bell and striking mechanism had been used at Manitowoc, Wisconsin. On June 26, 1914, the characteristic of the fog bell was changed to a single blow every fifteen seconds.

A brick oil house was built in 1898 to store the volatile kerosene then being used as the illuminant in the lighthouse. A flagpole was erected in 1905, and in 1907 the stations wooden sidewalks were replaced by 578 running feet of concrete walks.

Though the details regarding the structures at a light station are interesting to many, the keepers who looked after the light were the real soul of the lighthouse. The first two keepers of Little Traverse Lighthouse both had long tenures, with their combined service accounting for more than half of the time the light was staffed.

Not many lighthouses can claim a woman as its first keeper, but Little Traverse can. Elizabeth Whitney Van Riper Williams was born on Mackinac Island in 1844 and spent most of her childhood on Beaver Island, where she married Captain Clement Van Riper when just sixteen years old. Van Riper was appointed keeper of Beaver Island Harbor Lighthouse in 1869 and served in that role until November 29, 1872, when he drowned while trying to help a ship in distress. Elizabeth took charge of the light after her husbands death and kept the position even after marrying Daniel Williams in 1876.

Desiring to live on the mainland, Elizabeth applied to be keeper of the newly built Little Traverse Lighthouse. During her time at Little Traverse, she would publish her best-selling biography A Child of the Sea and Life Among the Mormons, in which she records her arrival at her new assignment in 1884.

Just a few hours passed when we steamed into Little Traverse Harbor, and the red light, just like the one we had left, was flashing its rays over the waters of Little Traverse Bay for the first time. The water was calm and still. The red light shone deep into the quiet waters, and many eyes were watching the bright rays from the light-house tower, and the wish of their hearts had been gratified in having a light house on Harbor Point to guide steamers and vessels into the harbor. The evening was clear and the picture was a lovely one as we rounded the point so near the light. Some passengers said to me. Here is your home. Dont you know the red light is giving you a welcome? Yes, it was all ones heart could wish, yet I felt there was another I had left in the old home that was now just a little more dear to my heart.

We were met by friends and taken to their home for the night. Next morning we drove through the resort grounds to Harbor Point Light House, as it is known by the land people, but to the mariner it is Little Traverse Light House. We were soon at work putting our house in order, and the beautiful lens in the tower seemed to be appealing to me for care and polishing, which I could not resist, and since that time I have given my best efforts to keep my light shining from the lighthouse tower.

Later in her time at Harbor Point, Elizabeth said:

Every evening as I climb my tower-steps I know that there are hundreds of other lightkeepers doing the same thing. I have many sleepless nights when storms are raging. My station is built of brick and stone, and is very comfortable and warm to live in. We lightkeepers feel a great sympathy with our sailors, for we know their eyes are watching to catch the welcome glimmer of the lights as they sail on the stormy deep.  Our lives are given to our work, and we feel the great responsibility resting upon us. We are faithful to the duties assigned us, and we keep our lamps trimmed and burning, a guide to mariners on the way to safe harbors of refuge.

After twenty-nine years at Harbor Point Lighthouse, Elizabeth retired and left the station on November 1, 1913 to live in nearby Charlevoix. Elizabeths replacement was veteran keeper Alfred C. Erickson, who had previously served as head keeper at Chicago Harbor Lighthouse and Calumet Harbor Lighthouse. While at Chicago Harbor, Keeper Erickson rendered assistance to thirteen people, saving lives in most of the cases. In an interview given one year after being assigned to Little Traverse Lighthouse, Erickson commented, Its the life-savers that always get the credit. We fellows are hired to keep the lights burning, but there isnt a man in the service who wouldnt risk his life and do his utmost to render assistance to anyone on the lakes. The average passenger on a lake steamer gives the light keepers little credit. The passengers depend on the captain for safety, but it is on the light keepers the captains have to depend.

Lighthouse Service records show that Keeper Erickson continued his lifesaving heroics at Harbor Point. In 1915, he towed two disabled boats to safety, and in 1918, he rescued a woman who tumbled into the water while getting out of a boat. In 1923, Erickson picked up six men off the launch Evelyn, which had caught fire, and then helped extinguish the fire.

Keeper Erickson was also known for building model yachts. During the third-annual model-yacht races held in Little Traverse Bay in 1926, every boat vying for the A.C. Erickson trophy had been built by Keeper Erickson. After having served thirty years at the lighthouse, Keeper Erickson passed away in November 1942.

Accretion gradually built up Harbor Point until the lighthouse was situated a significant distance from the entrance to the harbor. On July 28, 1959, the commander of the Ninth Coast Guard District held a public hearing to receive feedback on the plan to discontinue Little Traverse Lighthouse and its fog bell and establish an automated light on a skeletal tower near the extremity of the point. When no adverse comments were received, the Coast Guard requested that the General Services Administration exchange the lighthouse property for a fifty-foot-square parcel owned by the Harbor Point Association, who had agreed to pay for the difference in property value in cash. After the transaction was completed, a forty-one-foot-tall skeletal tower was erected on the point in 1963 to display an automated flashing green light.

As Harbor Point remains an exclusive gated community controlled by the Harbor Point Association, the best public views of the lighthouse are from the water.

For a larger map of Little Traverse Lighthouse, click the lighthouse in the above map.

Little Traverse Lighthouse is part of a gated community and is thus most easily seen from the water. Harbor Point Association allows Harbor Springs Area Historical Society to give tours of the lighthouse roughly once every three years as a fundraiser.

The lighthouse is owned by Harbor Point Association. Grounds/dwelling/tower closed.