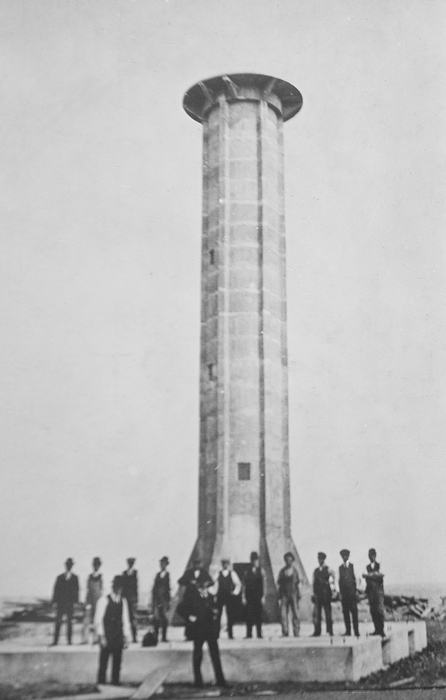 Tiny Little Hope Island lies about four kilometres off the coast of Nova Scotia, roughly midway between Liverpool and Shelburne. As Little Hope Island rises just a few metres above the sea, it is a dangerous obstacle for mariners. A wooden daymark was placed on the island some time before 1857, as in that year, Houston Stewart, Vice Admiral in the Royal Navy, noted that if a second-class light replaced the beacon on Little Hope Island it would be a great advantage to the general navigation of that part of the coast.

In 1864, John H. Kendrick, who that year inspected most of the lighthouses in Nova Scotia, reported the following:

I would respectfully recommend that a Light House be erected on Little Hope Island, to the westward of Liverpool. The Island is small and low. The action of the sea during heavy storms and high tides cuts away the south part. It is very necessary that this part be protected by a sea wall of split stone, about 100 feet in length, and averaging 3 feet in height, at a probable cost of $400. The wooden beacon erected many years ago on this Island is very rotten, and will soon fall down.

Kendricks recommendation apparently carried some weight as the next year a lighthouse was finally built on Little Hope Island. For protection, a rough stone wall was built at the high-water mark all around the island, and on the southern part, which was exposed to the beating of waves during storms and high tides, the wall had an exterior slope sheathed with pine. The lighthouse was a square, wooden tower that stood twenty-six feet tall and contained the living quarters for the keeper and his family.

Charles Firth was hired as the first keeper of the light. When the keeper of Coffin Island Lighthouse drowned while trying to reach the mainland in late 1872, Keeper Firth was transferred there and Alexander McDonald was placed in charge of Little Hope Island Lighthouse. Keeper McDonald would spend nearly twenty years on the tiny island, the longest of any of the stations keepers, before he resigned.

A gale on January 18, 1869 destroyed the breastwork on the southern part of the island and washed a large number of rocks, some of which weighed a half-ton, up against the lighthouse. During the storm, the tide was higher than normal, and there was a continual wash over the island. Keeper Firth and his family took refuge in the cellar of the lighthouse but expected the building would be swept away at any moment.

There had been multiple wrecks on Little Hope Island before construction of the lighthouse, but not one in the first few years after its completion. The island was the only danger between Cape Sable and Sambro Island at such a distance from the mainland, and fear of striking it detained vessels at sea for several days in some instances before the lighthouse was built.

In 1869, there was a patch of soil, three-fourths of an acre in size, on the island, but chunks of it were being washed away each winter. The government considered either building a new lighthouse on screwpiles in the middle of the island or building a new breakwater or seawall to protect the existing lighthouse. Fearing that if the sea were not held back the island would soon become a dangerous, unmarked reef, authorities opted for another seawall.

Herbert Young of Lunenburg submitted the lowest of five tenders for the work, but when he was offered the contract, he realized he had made a mistake in his calculations and refused to sign the contract. With no new protection being built, the island was left vulnerable when a hurricane moved along the coast of Nova Scotia in early September of 1870. Keeper Firth submitted the following account of the damage the island sustained:

I respectfully beg to report to you that the severe gale on Saturday night and Sunday morning last was very destructive to Little Hope Island. The sea began to break over the Island at five a.m., and continued its force until eight a.m. It washed away from five to six feet all along the bank; it also washed away a great deal off from the top of the Island, and covered it with stones. I hope that a suitable person may be sent to examine the present state of the Island; as it is, it is not safe to live on.

Keeper Firth was likely relieved when he was transferred to Coffin Island a few years later.

In 1872, the Public Works Department constructed a seawall of timber around three sides of the island. The Department of Marine expressed its confidence in the new barrier, writing that it would prove a complete protection against the danger to which this island has been exposed of being gradually washed away by the heavy seas, which, on more than one occasion, have placed the lighthouse and occupants in great jeopardy.

A new ten-and-a-half-foot iron lantern was placed atop the lighthouse in 1889, and a new lighting apparatus was installed that changed the character of the light from fixed to a revolving white light that showed a group of three flashes every fifty seconds.

In 1906, fire destroyed Little Hope Island Lighthouse necessitating the building of a new structure. A lighthouse and dwelling as described in the following were completed during the summer of 1907:

A reinforced steel concrete cylindrical tower was erected at this station. It is 10 6 in diameter, 75 feet high from its base to the lantern platform, and 95 feet high to the vane on the lantern. It is surmounted by a circular iron lantern, and the tower is strengthened throughout its whole height by six concrete ribs. A reinforced concrete stairway is constructed within the tower from its base to the light room floor. The tower was built by contract by the Steel Concrete Company, Limited, of Montreal, the contract price being $7.250. A steel framed concrete dwelling for the keeper was also erected, the steel framework being supplied by Messrs. I. Matheson & Co., of New Glasgow, N.S., for $800, and the building erected by days labour, under the supervision of the Nova Scotia agency, at a cost of $2,860.91.

A second-order Fresnel lens was placed in the lantern room atop the concrete tower, replacing a temporary sixth-order lens that had be in use during the construction. The large new lens produced a double-flash every ten seconds and was illuminated by petroleum vapour burned under an incandescent mantle.

The last keepers left Little Hope Island Lighthouse in 1948 when the light was automated. The concrete tower stood alone on the island for many years, minus its lantern room, until a mighty northeaster toppled it on December 7, 2003. Hurricane Juan inflicted significant damage to the island in September 2003, but the tower managed to cling to the rocky islet for a few more months. A lighted buoy, anchored east of Little Hope Island, marks what remains of the dangerous rocky hazard today.

For a larger map of Little Hope Island Lighthouse, click the lighthouse in the above map.