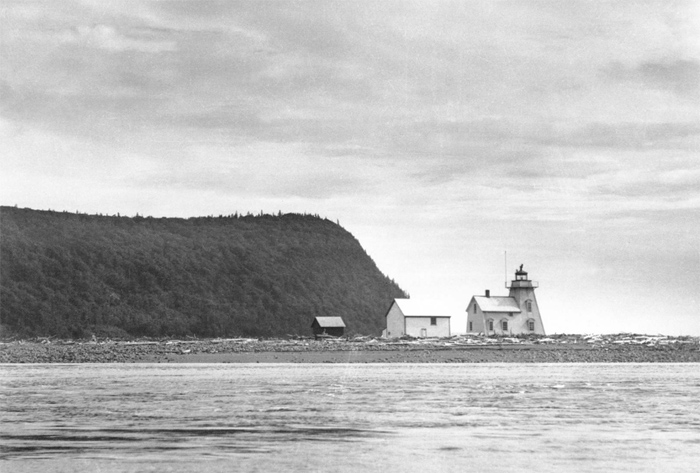 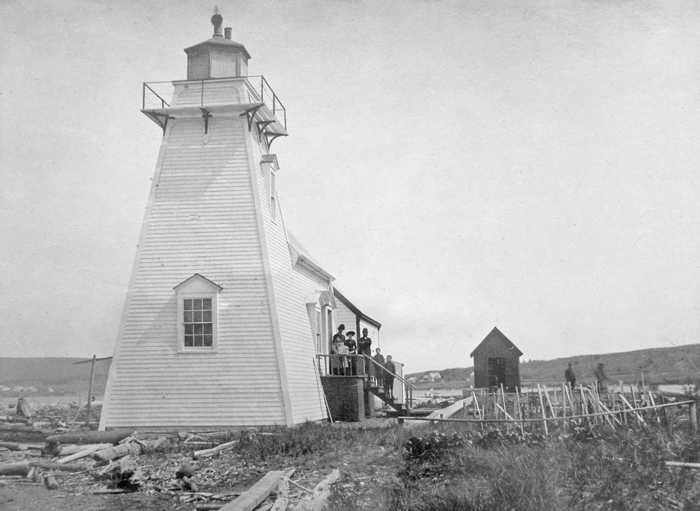 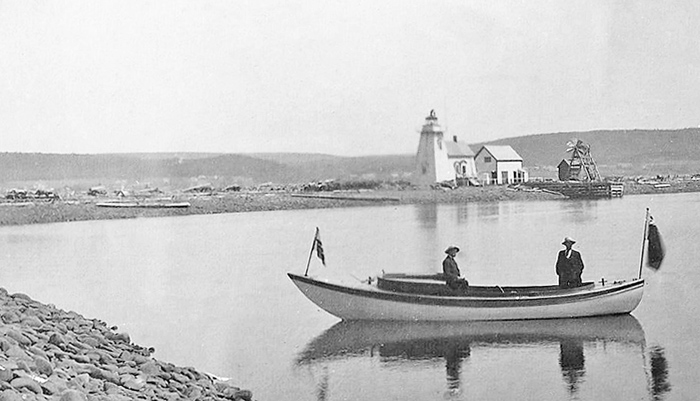 The town of Advocate Harbour is located between Cape dOr and Cape Chignecto on a harbour that dramatically dries at low tide. In 1884, Sydney Smith built a lighthouse on the northwest side of the entrance to the harbour under a contract for $1,000. The lighthouse consisted of a square, wooden tower that stood twenty-seven feet tall and was placed on a small crib on the bar. George S. Livingstone was appointed the first keeper of the light at an annual salary of $150, and he placed the light in operation on August 1, 1884. A sixth-order lens was used in the lantern room to produce a fixed red light that had a focal plane of thirty-six feet above high water and that could be seen for about seven miles. In 1886, the Department of Marine noted that due to the washing away of both the outer sand bar and the inner sand bar, on which the lighthouse was erected, the tower had to be relocated twice during the previous year. The following year, the department decided to move to the lighthouse to the opposite side of the channel. Tenders were invited for the work, and Thomas G. Livingstones tender of $675, being the lowest, was accepted. Work began in 1887, and the light was placed in operation in its new location on April 1, 1888. Besides moving the tower to the permanent beach on the opposite side of the channel, Thomas Livingstone also added a dwelling to the tower for the accommodation of Keeper George Livingstone and his family.

Vance Barteaux was a veteran of World War I and met Sinar Gallagher, his future wife, while he was serving in France. Sinar was serving in the British Womens Army Corps when Vance walked up behind her and tugged on her beautiful long black hair. Sinar promptly gave him a smack to the side of his head, but the two soon overcame this abrupt introduction. Vance and Sinar wed in Liverpool, England in 1919 and then moved to Vances hometown of Advocate Harbour. After surviving a bought of tuberculosis, Vance was appointed keeper of the towns lighthouse, in part due to his military service.

The Barteauxs had seven children, all of whom were born while the couple lived at Advocate Harbour Lighthouse. The light was extinguished during the winter months, so the family would pack up each fall and move to the village until the light was placed back in operation the following spring. The family raised a pig and some chickens at the lighthouse, and had a cow in a pasture about a mile away that they rented from a farmer. Vance also fished to help feed his family.

On December 12, 1921, the colour of the light was changed from fixed red to fixed white.

Willard Morris replaced Vance Barteaux as keeper in 1939, when the latter was transferred to Cape dOr. Keeper Morris looked after the light until 1958. Fire destroyed Advocate Harbour Lighthouse in 1964. A flashing red light is displayed today from a square, skeletal tower at the entrance to the harbour.

For a larger map of Advocate Harbour Lighthouse, click the lighthouse in the above map.

The modern light at Advocate Harbour is best viewed from the water, though a distant view from land may be possible.