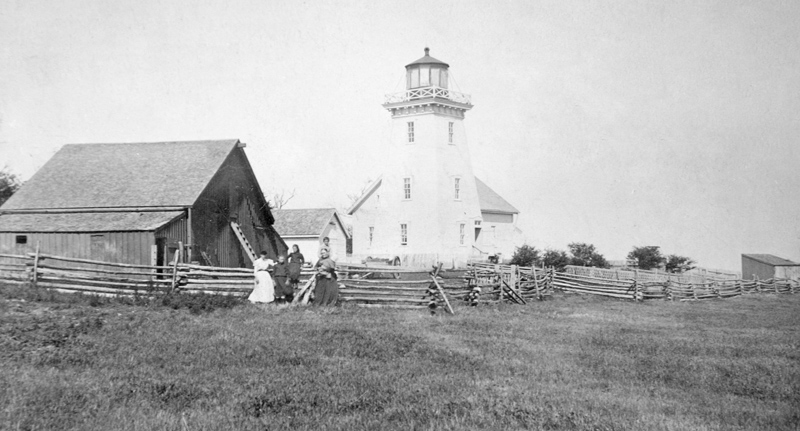 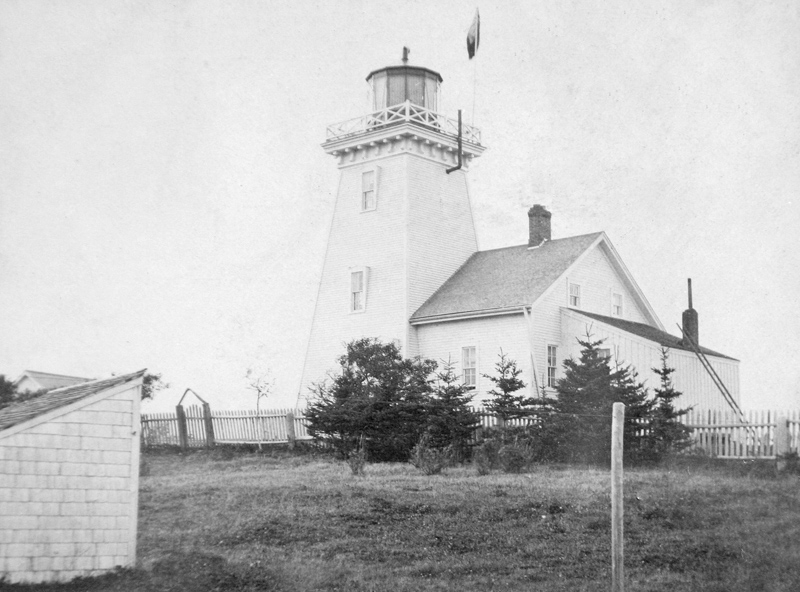 During an expedition in 1604 in the Bay of Fundy, explorer Samuel de Champlain recorded the following notes on Isle Haute, an island in the upper portion of the bay, about five miles from the tip of Cape Chignecto:

We crossed part of the Bay...to a place which we named the Cape of the Two Bays (Cape Chignecto) and we passed by an island, which is a league from it and which is about that distance in circumference, and is some 40 or 50 fathoms (300 feet) in elevation. It is entirely surrounded by great rocks excepting in one place, where there is a slope at the foot of which is a pond of salt water, which lies at the base of a gravel point having the form of a spur. The top of the island is flat, covered with trees, and it has a very good spring.

A lighthouse on Isle Haute was considered as early as 1837, when a light on either Cape dOr or Isle Haute was suggested. In 1840, Commander John Robb of her Majestys sloop Satellite selected the western point of Isle Haute as the site for a light to guide vessels sailing to and from Minas Basin. A lighthouse placed in this position, he wrote, would be generally useful, not only as a guide into the Basin of Mines and Cumberland Basin, but as a leading Light up the Bay from Annapolis, a mark for leaving the Eastern side of Quaco ledge and running for the anchorage of Apple River, which is the only safe anchorage in this neighbourhood in S.E. gales.

As a light on Isle Haute would benefit both Nova Scotia and New Brunswick, the committee on lighthouses and navigation securities for Nova Scotia recommended that the lieutenant governor ascertain how much New Brunswick would be willing to contribute toward the project. Before any action was taken, Captain Owen of the Royal Navy, who was conducting a survey of the Bay of Fundy, recommended in 1844 that a lightship should be placed on Quaco Ledge instead of a light on Isle Haute.

The objections that doomed the lighthouse on Isle Haute were the islands inaccessibility and its height, which it was felt, would have meant the light would often be obscured by fog or haze.

In 1875, the government of Canada appropriated funds for a lighthouse on Isle Haute, and two years later, a $3,700 contract for constructing the lighthouse was awarded to Calvin Cogswell of Oromocto, New Brunswick. The lighthouse was erected on the islands highest spot, just west of the center of the island. The square, wooden tower had a height of fifty-three feet and was attached to a dwelling that measured twenty-six by thirty-one-and-a-half feet and was fourteen feet high. The total cost of the lighthouse, including the lantern and illuminating apparatus, came to $5,920.36.

Captain Nelson Card was appointed keeper on November 20, 1877 at an annual salary of $500, but the lighthouse was not placed in operation until January 15, 1879. The light had a focal plane of 365 feet above the bay and could be seen, in clear conditions, from a distance of about twenty miles. Keeper Card constructed a mile-long road from the beach to the lighthouse with a grade that allowed supplies to be hauled up to the station, and he planted crops on an acre-and-a-half of land that was cleared around the lighthouse.

Keeper Card minded the light until 1889, and he was followed by four other keepers who looked after the station until it was destroyed by fire in October 1956. Percy E. Morris had the longest term as keeper, serving from 1904 until 1941.

After the long-focus reflector came crashing down through the charred tower in 1956, an automated light was established atop a skeletal tower. This tower remains on the island today and displays a flashing white light.

In 1947, historian and author Edward Snow purchased a mysterious map that he figured out five years later was a treasure map of Isle Haute drawn by the ruthless pirate Edward Low or one of his subordinates. After experts said the map was on seventeenth-century paper, Snow set out for Isle Haute, armed with his map and a metal detector. He described his emotions as he began his adventure in his book True Tales of Pirates and Their Gold: Almost nothing can equal the thrill of sailing out to sea on the way to a romantic island which one has never visited. When this thrill was combined with the knowledge that pirates had buried treasure on the island to which we were sailing, my excitement knew no bounds.

Snow stayed with Keeper John Fullerton and his wife Margaret and their teenage son Donald while on the island, who told him that he wasnt the first to come seeking treasure. After his metal detector signaled a find at the edge of a pit dug by others near the eastern end of the island that had been labeled The Place on his map, Snow began excavating with a pick. After a few minutes, he uncovered the ribs from a human skeleton.

On my next swing with the pick, Snow wrote, the sharp point caught on something in the ground. The earth tore away and I saw it was a human skull which rolled across my feet! Completely losing my nerve, I scrambled out of the pit, grabbed the lantern and started walking rapidly toward the lighthouse far away on the top of the island cliff.

The next morning, Snow returned to the site with Keeper Fullerton and his son and continued his search. He located eight coins around the skeleton which included Portuguese doubloons dated 1710. Before Snow could return to the States with his booty, the Royal Mounted Canadian Police informed him he needed an export license for the gold. The Bank of Nova Scotia held the coins, valued at $1,200, until Snow obtained the needed license. Life Magazine covered Edward Snows search for pirate treasure in its July 21, 1952 edition in an article entitled Red-Taped Gold.

For a larger map of Isle Haute Lighthouse, click the lighthouse in the above map.