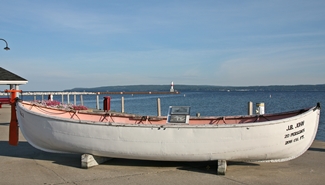 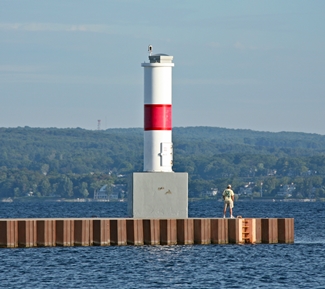 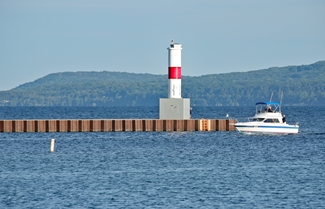 In 1896, George E. Sprang, a real estate and insurance agent, published the short picture book Petoskey and Little Traverse Bay, extolling the virtues of the area. Claiming that no other city in the northwest was so naturally attractive, the book began thus:

Throned on a noble amphitheater of hills, upon the south shore of a beautiful bay five miles broad and nine deep, environed all the way around by broken ranges of lofty heights, makes Petoskey unrivaled for the beauty of its outlook, each street and block having its own peculiar view; for its health-inspiring purity of atmosphere; and for its wide fame as a popular summer resort. Its streets and homes overlook the entire bay and its surrounding hills, and a succession of famous summer resort villages along the waters edge clear around the bay. In a few years there will be a broad boulevard along the shore all the way around the bay, lined the whole distance with summer cottages and permanent villas, parks, hotels and boat landings.

Named after the Ottawa Chief Ignatius Petosega, Petoskey is situated at the southeast corner of Little Traverse Bay. In westerly winds, the lake steamers had difficulty offloading summer visitors at Petoskey, prompting Congress to pass an act on August 17, 1895, authorizing construction of breakwaters to protect the landing pier. One breakwater, connected to shore, was built west of the landing pier, and a second detached breakwater was built to the north.

Work on the breakwaters commenced in 1896, and in 1899, a metal post with a lamp house at its base was placed fourteen feet from the outer end of the western breakwater. Two lantern lights, a red one above a white one, were exhibited from the post starting on July 1, 1899. A six-foot-tall timber protection was built on the north end of the breakwater in 1900, and its angle was enclosed to form a storehouse. The schooner Willia Loutit damaged the pierhead lights on July 11, 1900, but repairs, paid for by the schooners owners, were soon made.

In 1903, structural steel and cast-iron metalwork were ordered to enclose the piers metal post, but the work was evidently not carried out until 1912. The resulting thirty-four-foot-tall lighthouse resembled an inverted funnel and consisted of a pyramidal base, a vertical mid-section, and an ornate lantern room. This funnel-like style of lighthouse was also deployed on piers at five other Lake Michigan cities: Waukegan, Illinois and at Kenosha, Milwaukee, Racine, and Sheboygan, Wisconsin

On April 30, 1912, one hour after returning home from Lockwood Hospital, where he had spent three weeks suffering from heart disease, forty-seven-year-old Will Hurkett shot himself in the head with a revolver. Hurkett had been keeper of the light since it was established in 1899 and was believed to have been mentally unbalanced at the time of the shooting due to his illness and other troubles, including his wife being an inmate at Northern Michigan Asylum in Traverse City for nearly a year. Keeper Hurkett left behind four children, two of whom were still living at home.

On May 10, 1913 the characteristic of the pierhead light at Petoskey was changed to a red flash every four seconds, and the following year, the intensity of the light was increased to thirty-five candlepower.

During a severe storm in December 1924, the lighthouse was washed from the breakwater and destroyed. A newspaper account noted that the self-lighting lighthouse had been discontinued for the season on December 8, just six days before it was swept off the breakwater. A temporary light was displayed from an unpainted post until 1930, when a concrete foundation was constructed on the breakwater, and a new light was displayed from a thirty-foot, skeletal, steel tower, painted red.

In 2009, long-awaited repairs to Petoskeys breakwater were made after the Army Corps of Engineers was granted funds for the project through the American Recovery and Reinvestment Act. As part of the work, the existing cylindrical light tower was removed from the pier, giving local lighthouse enthusiasts Gordon and Carolyn Bourland the thought that it would be the perfect time to build a replica of Petoskeys funnel-style lighthouse. The Bourlands enlisted the help of the Great Lakes Lighthouse Keepers Association, but when the plan was presented to the Coast Guard, it was rejected since private aids to navigation are not permitted on piers. Undaunted, the backers of the project contacted the Petoskey Parks and Recreation Commission, and at a public hearing held on June 2, 2010, the commission passed a resolution asking the city council to endorse a plan to place the lighthouse in Sunset Park, overlooking Petoskey Harbor.

In August 2010, the Petoskey City Council rejected the use of Sunset Park for the lighthouse, but a month later they approved placing the structure in Quarry Park. Moran Iron Works of Onaway, who had recently built a new lantern room for McGulpin Point Lighthouse, estimated that the replica could be built at a cost between $225,000 and $250,000. The Great Lakes Lighthouse Keepers Association is trying to raise $300,000 to fund the lighthouses construction and to provide an endowment for its maintenance. As none of the six funnel-style lighthouses have survived, having a replica in Petoskey would be sure to attract a lot of attention.

For a larger map of Petoskey Pierhead Lighthouse, click the lighthouse in the above map.

From Highway 31 in Petoskey, go north on Petoskey Street to the marina, from where you can view the light.

The light is owned by the Coast Guard. Tower closed.