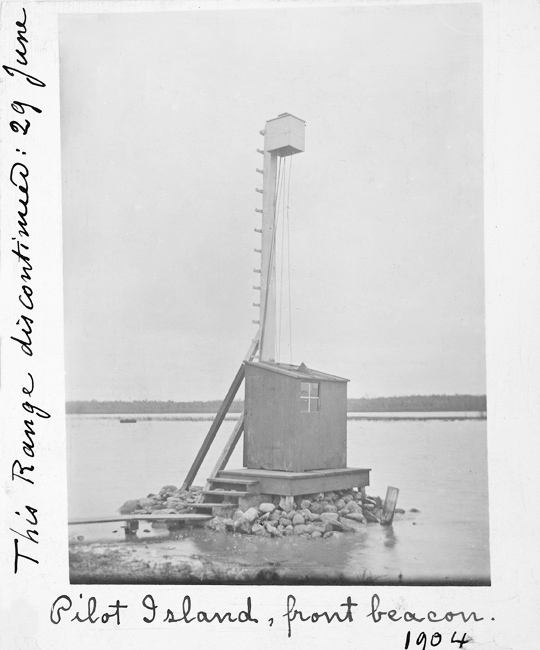 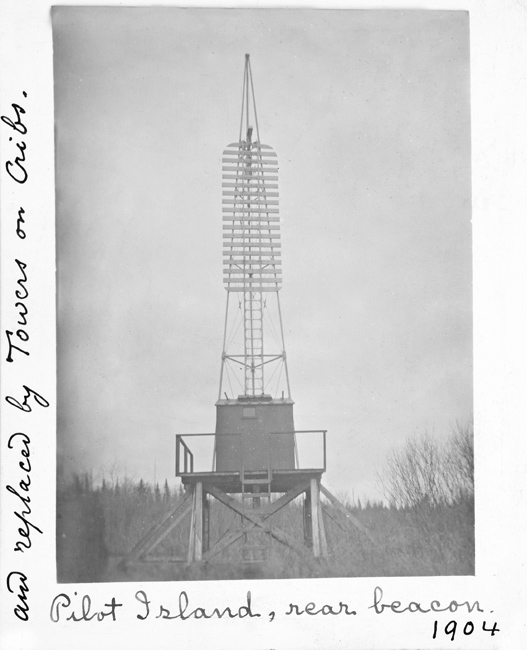 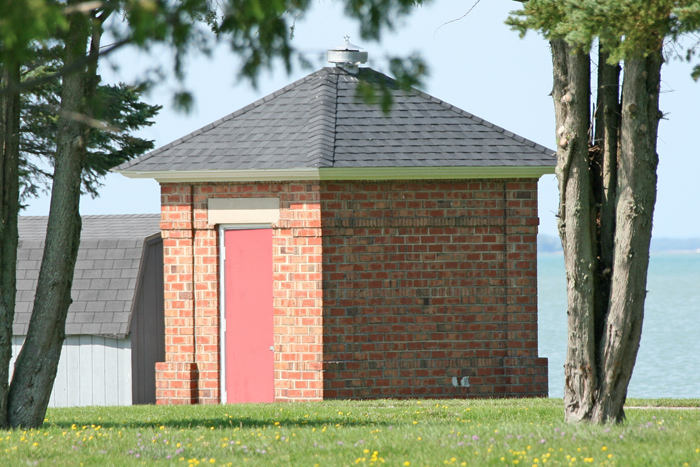 1892  Two skeleton iron towers were purchased, one for Winter Point and the other for Pilot Island. Work was begun on Pilot Island Range on June 11 and finished June 23. The rear light consists of a skeleton iron tower 36 feet high, triangular in plan, similar in construction to that at Winter Point, erected on a cluster, of 49 piles. A lamp house, 6 ½ feet square and 7 ½ feet high, was erected at the base of the tower. The front range was erected on Pilot Island and consists of a post 12 inches square by 30 feet high, with a house 8 by 12 feet in plan and 10 feet high, which is provided with a door and two windows, and inside with a bunk, and fitted with cleaning and storage shelves. A plank walk was laid from the door to the water's edge.

1895  Pilot Island range, St. Marys River, Michigan.These ranges were established and the lights were shown on October 15, 1894, for the first time. Material was purchased for a watch room and was delivered at Pilot Island by the Amaranth.

1899  Pilot Island range, St. Marys River, Michigan.An extension was added to the existing dwelling, forming a bedroom and a living room. Various repairs were made.

1903  Pilot Island range, St. Marys River, Michigan.These beacons as at present located are entirely insufficient as day marks, and as the range is more than 6 miles long, good targets are necessary to answer the purpose. The intensity of the lights should also be increased by substituting lenses of the fourth order for the lens-lanterns now in service. To effect this change and to reestablish the range in a position more advantageous to navigation, a new site on which to locate the front light of the range and to provide new structures for the beacons was practically completed. Estimates were made for constructing the new beacons and remodeling the keepers dwelling. Various repairs were made.

1904  Pilot Island range, St. Marys River, Michigan.A site for the front range and dwelling was bought and the deed was recorded. The materials were purchased for the beacons and for remodeling and repairing the keepers dwelling, and, with a working party, were landed at the station. The building is well under way; the structure is inclosed and the plastering commenced. The site for the front light and keepers dwelling of the Pilot Island range was purchased and the deed was duly recorded.

1907  Pilot Island Range, St. Marys River, Michigan.About 420 feet of the stone dike leading from the shore to the front is being built.

For a larger map of Pilot Island Range Lighthouse, click the lighthouse in the above map.

No lights exist at this location today, but an oil house from the station survives.