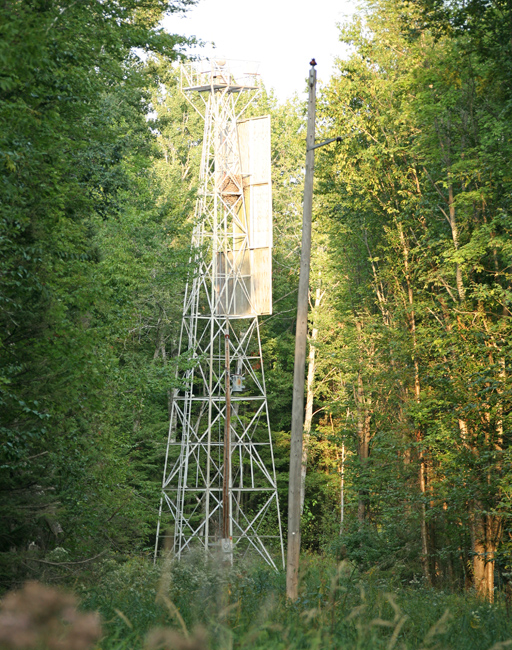 1892  Plans were prepared for permanent stations at Winter Point, Round Island, Pilot Island, and Middle Lake George, and materials were purchased after advertisement by poster and circular letter. Two skeleton iron towers were purchased, one for Winter Point and the other for Pilot Island. The working party and materials were transported from the light-house depot, Detroit, and the work of construction at Winter Point was commenced on May 5. A landing wharf 10 feet wide and 16 feet long was built for the front range light. In the center of the wharf a timber was set up with arms at the top to carry sheaves for hoisting a lantern. A lantern house was built on the wharf at the foot of the mast and a walk was built from the front to the rear range. The skeleton iron tower was erected on shore. It is triangular in plan, 60 feet from base to focal plane, with posts of 3 and 2 ½ inches star iron, with lateral braces 2 ½ and 2 inches star iron and brace rods 5/8-inch and ½-inch round iron. It is provided with a ladder, lamp carriage, and day mark. A frame dwelling one and a half stories high was constructed, as was also an oil house. The station was completed on June 23. The lights, fixed white lens lanterns, were exhibited for the first time on June 2.

1895  Winter Point range (rear), St. Marys River, Michigan.The construction of the foundation piers and moving the light-tower back across the peninsula were completed. The tower was moved November 15, 1894, from the old to the new site, a distance of 545 feet, making the distance between the ranges 675 feet. A brick foundation was laid for the oil house and the structure was moved 505 feet and placed. Some 545 feet of footwalk 2 feet wide, elevated on cedar posts, were built, connecting the front and rear lights. Material was purchased for inclosing the foundation of the dwelling, constructing a foundation pier, and repairing the roof of the dwelling.

1896  Winter Point Range, St. Marys River, Michigan.A landing 1,008 feet long was built, with a walk on top, giving 3 feet 6 inches of water at the outer end. Walks were provided to connect the sidewalk with the landing. New brick piers were built at the rear range, one being enlarged and capped with iron plate. Minor repairs were made.

1903  Winter Point range, St. Marys River, Michigan.The wooden walk leading from the dwelling to the rear tower having begun to show signs of failure, an earth embankment 525 feet long was thrown up to take its place across the marsh. Various repairs were made.

1904  Winter Point range, St. Marys River, Michigan.Surveys were made of the sites of this range and the boundaries were marked with concrete monuments. A channel was dredged.

1907  Winter Point Range, St. Marys River, Michigan  On account of its importance and its length of 8 ¾ miles, this range was reconstructed and improved. A skeleton frame tower, 22 ½ feet high to the focal plane, surmounted by a frame lantern, was built for the front beacon of the range, a locomotive headlight was installed, and various repairs were made. On June 30 the new lights were shown.

1910  Materials have been purchased for authorized oil houses at the following-named stations, and it is expected to erect them during the year 1911: Winter Point range, Mich., Whitefish Point, Mich., Sand Point, Mich.

For a larger map of Winter Point Range Lighthouse, click the lighthouse in the above map.