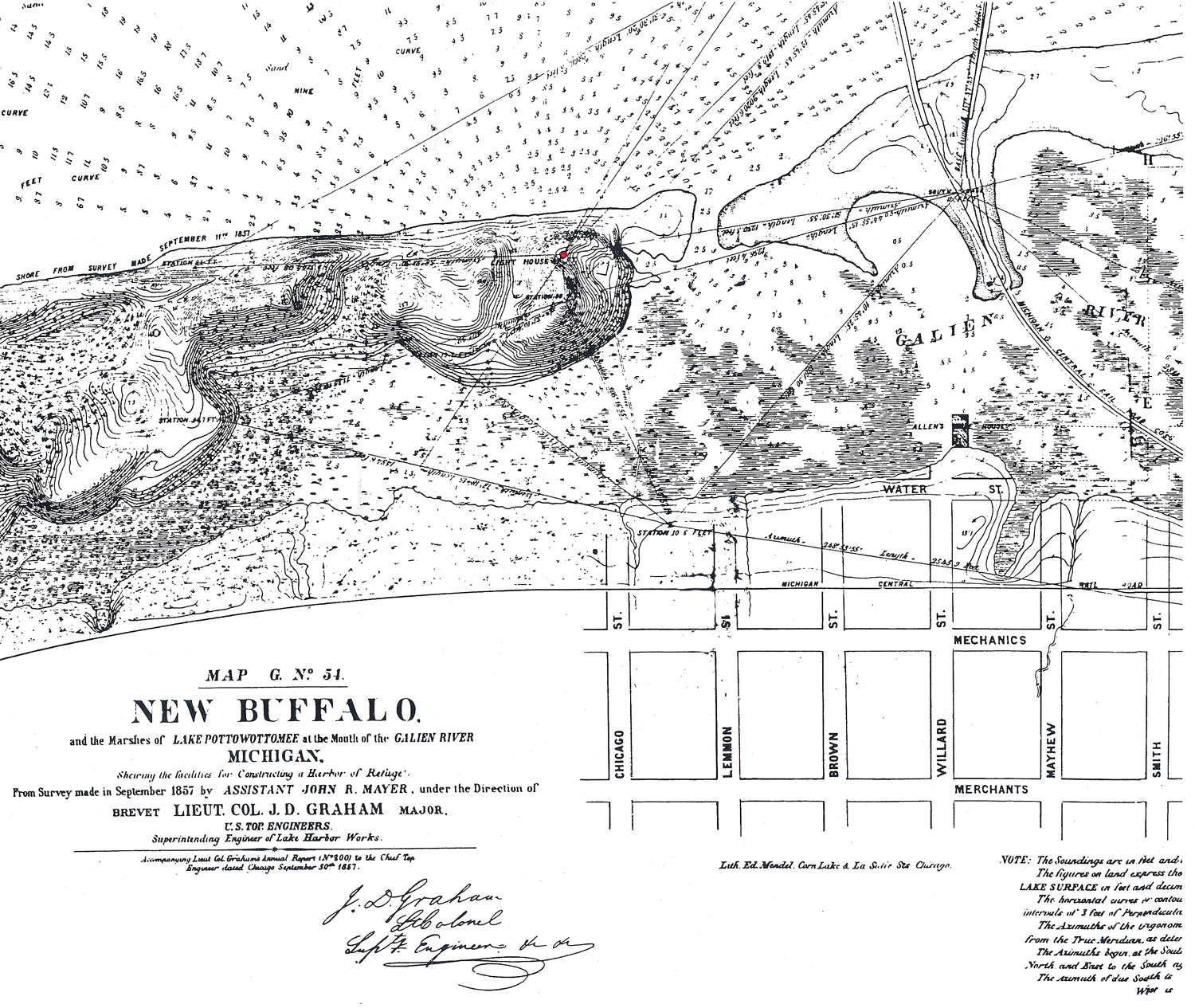 1837  New Buffalo is twelve miles to the northward and eastward of Michigan city, and may also be considered as in the bend of the lake. The Galien River, at the mouth of which New Buffalo is situated, is a fine, large stream, and is capable of being formed into as good a harbor as Chicago, and at much less expense. This is a highly important point, when its improvement to the head of the lake is considered, and should, by all means, be improved without delay, by running out harbor-piers. A light-house at this place is needed, and I have recommended that the one intended for City West should be placed here. New Buffalo contains about three or four hundred inhabitants.

1838  At New Buffalo, (another point for which an appropriation for a lighthouse has been made,) I deemed the most suitable site for one to be on the high bank south of the entrance to the river; the spot is well marked by letters on the trees, and a proper stake in the ground. The elevation of this site is about forty feet from the lake, and conveniently open to vessels from any direction on it. A building twenty feet in height would be amply sufficient to enable it to be seen as far as any other in that region. The land upon which this location rests, is the property of Captain Nessel Whitaker, an old resident, and one of the first settlers of New Buffalo. Sufficient for the light-house buildings and keepers use may he had at moderate costsay one hundred dollars per acre. The other point at the entrance to the river is low, and its shape frequently changed by the action of the waters of the river and lake; it would, therefore, be imprudent to place any buildings upon it.

1849  On the 3d March, 1849, another act was passed, entitled An act making appropriations for light-houses, light-boats, buoys, &c, and providing for the erection and establishment of the same, and for other purposes.
Under the second section of this act, the Secretary of the Navy was requested to appoint officers of the Navy, of a grade not below that of commander, to examine and report upon the expediency, or otherwise, of erecting lights at the following places, viz:
In regard to the following lights, provided for by the same law, it was not considered necessary that Navy officers should examine them. The necessary instructions have, therefore, been given to the several superintendents to give effect to the law, as follows:
For a beacon on a pier at New Buffalo, $750. This beacon has been placed upon the pier at an expense of $475.

1850  New Buffalo, July 22. The appropriation of $75, which I thought of expending for a foot-bridge at this place, I have not yet expended; and I find the channel of the river - and in fact the bed itself - so changeable, owing to the washing of the lake, that I shall not build the bridge as I proposed. The tower of the light wants painting, pointing, and whitewashing, at an estimated cost of $25. One side of the kitchen wall is caving in, in consequence of the foundation having given way. The whole one side of the kitchen wall will have to be taken down, a new foundation laid, and the kitchen floor raised, which will put everything in good order. Estimated cost of this, $75. Conduct of keeper good.

1850  Fall report. The beacon at New Buffalo has been rebuilt almost entire, nothing but a little frame-work having been saved. The cost is some $175, which is low considering that $50 more would have rebuilt it from the foundation, for which we paid when new $475.

1859  Congress at its last session having empowered the department, upon the recommendation of the Light-house Board, to discontinue from time to time such lights as may become useless by reason of mutations of commerce and changes of channels of harbors, and other causes, the following lights have been dispensed with, viz: New Buffalo, Round Island, Rock Harbor.

The site, located in N.W. fractional quarter of section 9 T6S-R21W, was bought from Wessel Whitaker for the sum of $00, on July 6, 1839 and sold at public auction December 16, 1902 to F.R. Perkins for the sum of $75.
The tower was erected in 1839-1840 at a cost of $5,000 with a sixth order light and was changed to fifth order light in 1857.
The light was not lighted after the close of navigation 1858 and was officially discontinued on August 1, 1859.
During the summer of 1859 all the movable articles were removed by the Lighthouse Board. The bricks and the metal work were sold at public auction in August 1861. The keepers dwelling was sold at public auction in April 1862.
The tower was 23 feet 8 inches high from base to deck, 10 feet 11 inches in diameter at the base, with walls 3 feet 2 inches thick. At the springing of the arch the interior was 6 feet 2 inches in diameter and the walls were 1 foot 9 inches thick. The deck was of stone, resting on a brick arch.

For a larger map of New Buffalo Lighthouse, click the lighthouse in the above map.

No light exists at this exact location today, but modern lights due mark the ends of the breakwater that now define the entrance to Galien River. A "replica" New Buffalo Lighthouse is found on the north side of the entrance to the river, but it is not a very accurate replica.