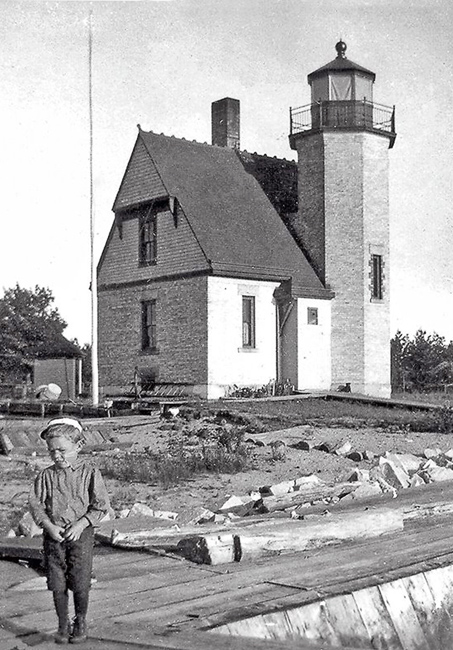 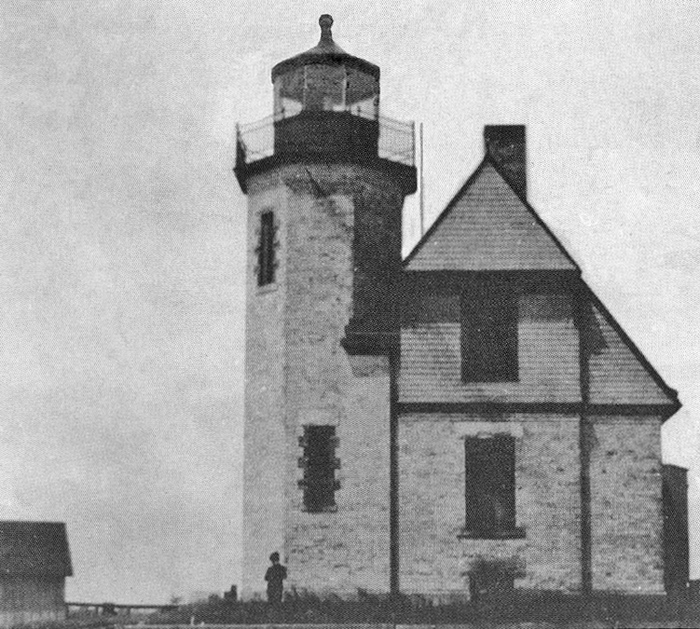 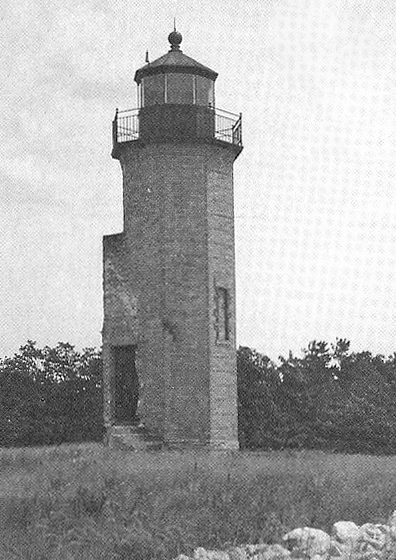 1891  Gladstone, Little Bay de Noquette, an extension of Green Bay, Michigan.The following recommendation, made in the Boards annual reports for the last three years, is renewed:
It is stated that the plans of the Minneapolis, Sault Ste. Marie and Atlantic Railroad, now in process of execution, will give to Gladstone the most important shipping in these waters, and that every year will augment its importance. It is stated that last year nearly 300 vessels entered that harbor, and it is expected that next year the number will exceed 1,000. A light either on Sanders Point or Squaw Point will answer the purpose of guiding into Gladstone Harbor, at least for the present. It is estimated that a site can be obtained and proper structures can be erected for the establishment of a proper light at a cost of $10,000.
Recommendation is made that an appropriation of that amount be made therefor.

1894  Gladstone, Little Bay de Noquette, an extension of Green Bay, Michigan.The following statement, made in the Boards last annual report, is repeated:
The establishment of a light on Sanders Point, or Squaw Point, to guide into Gladstone Harbor, at a cost not to exceed $10,000, was authorized by the act approved February 15, 1893, but no appropriation therefor has yet been made. The Board recommends that the amount named be appropriated.

1896  Squaw Point, Green Bay, Michigan.Negotiations relative to obtaining title to the site were begun. An offer was accepted to sell 1 acre for a site for $750. The deed was given, accepted, and recorded. Steps will be taken at an early date for the construction of this station.

1897  Squaw Point, Green Bay, Lake Michigan, Michigan.Plans, specifications, and detailed estimate of cost and contract for constructing a light tower, keepers dwelling, boathouse, etc., were made. The work was begun in May, 1897. The tower, dwelling, etc., were about one-half completed at the close of the fiscal year.
NOTE.The light was established on August 16, 1897.

1898  Squaw Point, Green Bay, Michigan.The work of constructing a tower and dwelling, under contract, was completed in July, 1897. The light was established on August 16, 1897. A drive well was put down, a nonfreezing pump was provided, and a box and platform built around it. A flag pole was set up. Supplies were furnished.

1901  Squaw Point, Green Bay, Michigan.Metal hand railings were placed on the tower stairs. A brick oil house was built. A plank walk was laid from the dwelling to the boathouse. Various repairs were made.

1903  Squaw Paint, Green Bay, Michigan.During the winter the landing crib was carried away by ice. It was replaced in the spring, piles being driven and a plank deck put on. The boatways, which were also carried away, were replaced. Various repairs were made.

1906  Squaw Point, Green Bay, Michigan.Two cribs for shore protection were built to the height of 20 inches above lake level, and the space, 100 feet, between the cribs was filled with brush and stone in a crib-like structure, with the exposed wall sloping at an angle of 45 degrees. Some 90 feet of crib structure was built along the shore line south of the boathouse, and the structure was filled with stone. A triangular-shaped crib, with 16-foot sides and 10 feet at the end, was sunk 31 feet in front of the boathouse. Two cribs were constructed and filled for securing boatways. Various repairs were made.

1915  Squaw Point Light StationGreen Bay, North End. The characteristic of Squaw Point Light was changed on April 20, 1915, to flashing white every 4 seconds, flash 1 second duration. Intensity was increased at the same time, of the white light to 350 and the red sector 100 candlepower.

1921  Fire at Squaw Point Light Station. On the evening of August 8, the entire wooden roof, floors, and other inflammable parts of the brick dwelling at Squaw Point Light Station, Mich., were destroyed by fire. The brick tower was practically uninjured except the wooden finish about window openings. The cast-iron stairs were subjected to intense heat but were not injured. The glass of lantern house was entirely destroyed by heat. The acetylene apparatus was subjected to more or less damage. The estimated cost of repairs was $600.

1933 - Lansing State Journal, January 21, 1933, Escanaba,  Rifle marksmen used the Squaw Point light house across the bay from this city for a target sometime recently. The lens in the light was destroyed, the windows of the lantern room broken, and a lock shot off the door.

1948  The Escanaba Daily Press, October 1, 1948. Dan Garrett, officer in charge of the Escanaba light station, today said he has reported to Ninth District Coast Guard headquarters that vandals have caused considerable damage to the Squaw Point light station on the Stonington shore opposite Gladstone.
Panes of glass in the lighthouse had been broken by bullets and rocks; the lock on the door leading to the tower had been pounded, and other damage done. Several times this season and in past seasons the light station has been damage. Once the lens was shattered by a high powered rifle bullet.
Cigarette butts and burned matches were found on the floor in the tank room near several barrels of gas used in the lamp. Garrett said this gas was highly explosive. FBI officials have twice been called in, and sheriffs officers have tried to catch the vandals.

1962, The Escanaba Daily Press, November 1, 1962, Work on dismantling the Squaw Point Lighthouse at Maywood, which has been under way for the past two weeks, will be completed in the near future and a new tower with a beacon light installed.
Lloyd Barnes, officer in charge of the Coast Guard Station at Escanaba, said that the new light will probably be put into use today. A tower, which consists of solid steel pole, will hold a 250 millimeter lantern that will operate on a 24-hour basis.
The Omar Morey firm of Escanaba is engaged in dismantling the old tower, and installing the new on in a concrete base. The new light and tower will be located about 30 feet south of the old lighthouse.
Barnes said the lantern is battery operated and will be service by the Escanaba Coast Guard Station. The tower is located on Little Bay de Noc opposite the City of Gladstone.

For a larger map of Squaw Point Lighthouse, click the lighthouse in the above map.