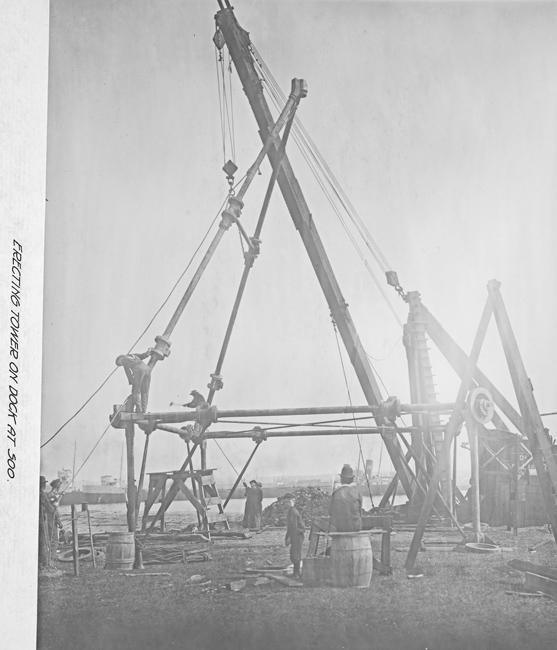 1885  Saint Marys River ranges, to guide through the dredged cut in Saint Marys River, near Round Island, Lake Superior, Michigan.An appropriation of $12,000 having been made for the establishment of range lights for the navigation of the river above the canal, it was determined to place range-lights in the prolongation of the axes of the channels dredged by the War Department, now lighted by private parties. Efforts are being made to obtain titles to the sites selected for these ranges. This will take so much time that the lights cannot be established until next year. Meantime the private lights can be continued.

1886  Saint Mary's River ranges, Saint Mary's River, Michigan. Two sets of range lights are to be established with the appropriation of $12,000 made by the act of Congress approved March 3, 1885. One set is to be located nearly opposite Point aux Pins, Ontario, and the other near Round Island, Michigan. During the past year the sites were secured, plans and estimates were prepared, proposals were invited, and a contract was made for $8,450, providing for the completion of the work by October.

1887  Round Island, near entrance to St. Marys River, Michigan. When the St. Mary's River ranges were lighted this light was discontinued and the illuminating apparatus was taken to Detroit and stored in the depot. The buildings and grounds are looked after by the keeper of the upper ranges and are in good order.

1888  St. Mary's lower range, Lake Huron, Michigan.A gallery was built around the front tower to enable the keeper to remove the ice and snow from the glass. A walk was built from the landing-dock to the shore, and several minor repairs were made.

1890  1138. St. Marys River lower range (front), MichiganThe material required to build a breakwater in front of the station to protect the bank from erosion was purchased and delivered.

1896  St. Marys River (lower) Range, MichiganThe shore at the front station was protected by a revetment of crib work filled with ballast stone, and extending 185 feet from the boat landing to the front of the beacon.

1901  St. Marys River (lower range), Michigan.The foundation of the front beacon of the range was repointed, a protection crib, 15 feet square, was built around it and filled with stone, and 484 running feet of walk was renewed. Various repairs were made.

1905  St. Marys River lower range, MichiganThe concrete blocks for the erection of a fire-proof oil house were made at the Detroit light-house depot and were delivered here. The walk connecting the beacons was renewed.

1909  The keeper has lived here 13 seasons & his wife 5. They both have contracted rheumatism & it is chronic. They both claim to experience spells of ill-health at intervals due to dampness of dwelling & premises.

1916  Brush Point Range Front Light. The intensity of Brush Point Range Front Light was increased and an auxiliary light installed August 29,1916. The light is increased to 1800 candlepower, to show on the range line only. An occulting white light, of 120 candlepower, occulting every 10 seconds, light 5 seconds, eclipse 5 seconds, to show around horizon, except on the range line, was installed on the structure at the same elevation as the present light.

1942  Intensity of Brush Point Rear Range Light was increased to 4300 candle-power and the tower was raised 8 feet to a height of 66 feet above low water.

For a larger map of Brush Point Range Lighthouse, click the lighthouse in the above map.