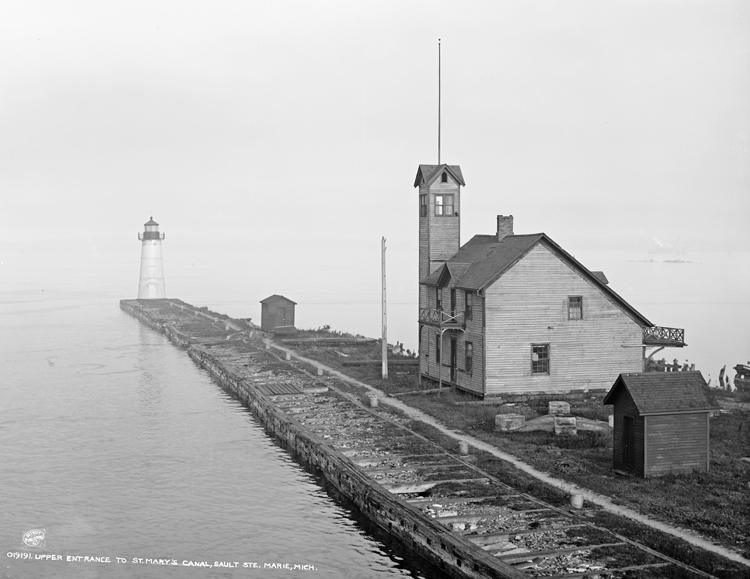 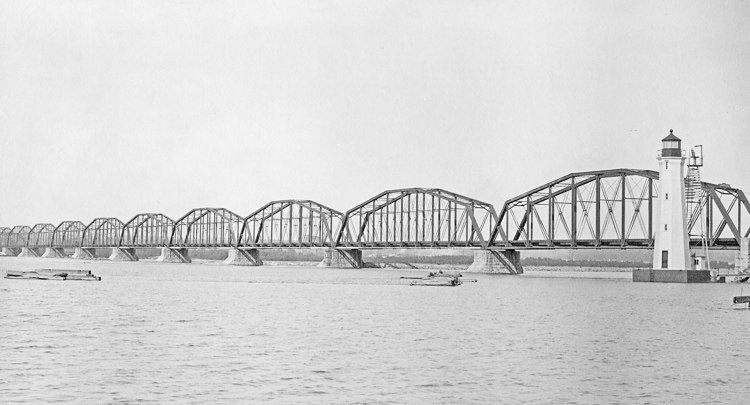 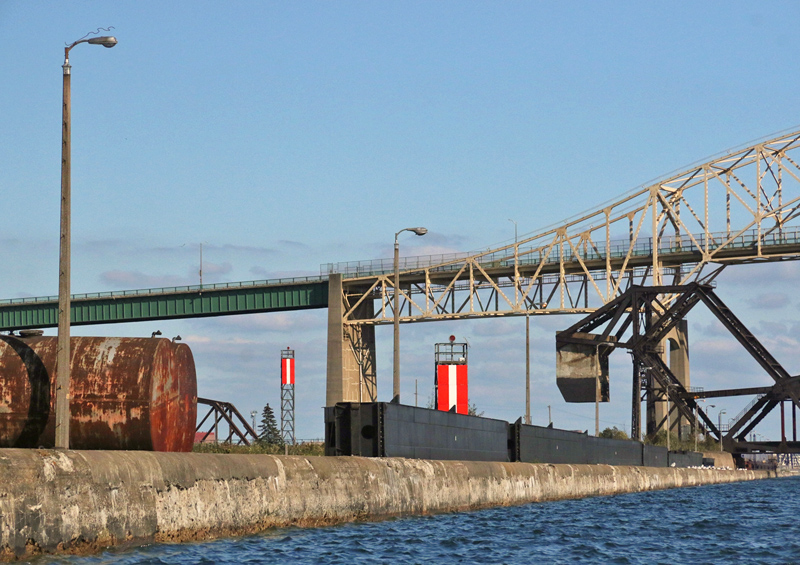 1883  St. Marys Falls Canal, (northpier,) western entrance of St. Marys Falls Canal, Michigan.A light-house was erected near the end of the north pier, to serve as a rear range to guide into the western entrance to the canal. The structure is an iron tower, which rests on a foundation of rubble masonry laid with cement mortar. A small shed was erected for the storage of oil and ordinary supplies. The work was commenced October 7, and was completed and lighted on November 20, 1882. In the spring of 1883, a slight crack was discovered in one of the corner-posts at the second joint from the bottom, and a wrought-iron sleeve or clamp was made and fitted to the post, to prevent the crack from extending.

1886  Saint Mary's Falls Canal (south pier), at the western entrance of Saint Marys Falls Canal, Michigan.The erection of a keepers dwelling was begun on June 30, and is now in progress. The work is being done by contract for $3,205, and is to be finished by September. The dwelling is on the bank of the canal, near the upper guard-gate, on a lot obtained in March, 1885, from the War Department.

1887  St. Mary's Falls Canal (north pier), western entrance of St. Marys Falls Canal, Michigan.A new lens lantern was provided to replace one which was broken and unfit for use.

1888  St. Mary's Falls Canal (north pier), Lake Huron, Michigan.On the night of August 1,1887, the characteristic of this light was changed from fixed white to fixed red. Orders have been given for the erection of a substantial shed here for the protection of buoys.

1889  St. Mary's Falls Canal, south pier, Michigan.The construction of a shed for the storage of the buoys of St. Marys River was begun on September 20 and finished on October 3,1888. The building, 20 feet by 50 feet in plan and 12 feet high to the eaves, is placed near the keepers dwelling. In January, 1889, the necessary materials were provided to enable the keeper to construct a boat-house on the pier near the lighthouse, and the keepers dwelling was repaired.

1890  1136. St. Marys Falls Canal, north pier, St. Marys River, Michigan. The top of the pyramidal iron tower was cut off at a point just above the base of the top section and replaced by a cast-iron gallery 7 feet in diameter, with a small octagonal lantern 3 1/2 feet internal diameter, supported on a pedestal bolted to the gallery.

1894  St. Marys Falls Canal, north pier, St. Marys River, Michigan. The light was changed at the opening of navigation from a fixed red light of the sixth order, to a fixed white light of the fifth order, varied by a red flash every minute.

1895  St. Marys Falls Canal, south pier, St. Marys River, Michigan. The iron tower, which was shifted out of plumb by a collision with the schooner H. A. Hagood, was replaced in position. Various repairs were made.

1896 - St. Marys Falls Canal south pier, St. Marys River, Michigan. The small crib on which the oil house stands and the boathouse were rebuilt. The lantern deck railing, which was damaged by a passing vessel, was repaired. Various minor repairs were made.

1899  St. Marys Falls Canal, South Pier, Michigan. A small wooden structure with open stairway and iron hand railing was framed and erected on this pier. The sides and ends of the building were painted white and the roof red.

1899 - 256, 257. Vidal Shoal Channel range, St. Marys River, Michigan. The north and south pier lights at their new positions near the railroad embankment and the outer end of the north pier were practically rebuilt. The front beacon was moved to the end of the north pier and placed on temporary foundation. Three wooden cribs 10 feet square and 7 feet deep were placed at the southerly end of the International Railroad Bridge and filled with ballast, and the rear beacon was placed upon these. The upper portion of the cribs, upon which the rear beacon rests, are yet to be filled with concrete.

1899  Sault Ste. Marie, Mich. July 1, 1899. COLONEL: I have the honor to submit herewith the following report of operations for improving St. Marys River, Michigan, during the fiscal year ending June 30,1899: The principal work done was the completion of the west approach to the canal, whereby an improved channel, 1,000 feet wide and 21 feet deep, was opened through the Vidal Shoals.
The light-house on southwest pier was moved across the canal to end of northwest pier, and with the light on rear tower forms a range for center line of channel; also three gas buoys were located on Vidal Shoals to mark side lines of new channel.

1900 - Vidal Shoals Channel Range, St. Marys River, Michigan.The rebuilding the north and south pier lights at their new positions was completed on September 16, 1899. Three concrete piers for the foundation of the rear range tower and a brick foundation for the front range tower were built, and the towers were placed in their respective positions and painted. A stairway was built leading from the foot of the rear range to the top of the railroad embankment. Various repairs were made.

1901  Vidal Shoals Channel Range, St. Marys River, Michigan. The rear tower of this range was provided with a track and sliding carriage for raising and lowering the lens lantern, and the positions of the lights as formerly shown were reversed. In making this change the characteristic of the revolving apparatus installed in the front range tower was changed from flashing red every minute to flashing red every 40 seconds and the apparatus was overhauled and repaired. The work of changing the rear light of this range to a fixed red incandescent electric light of 125 candlepower was in progress at the close of the fiscal year.

1901  St. Marys Falls Canal (south pier) St. Marys River, Michigan. This light was discontinued on November 1, 1900, being no longer needed to mark the end of the pier, which is lighted by two red lights, one above the other. These lights are maintained under the direction of the War Department as necessary for the operation of the canal and locks.

1903  Vidal Shoals Channel Range, St. Marys River, Michigan.The work of raising the focal plane of the front tower and rebuilding the rear tower was commenced in June, 1903, and at the end of that month the iron front tower was nearly completed and the foundation was partly prepared for the rear tower. Minor repairs were made.

1904  Vidal Shoals channel range, St. Marys River, MichiganThe work of raising the focal plane of the front tower and rebuilding the rear tower was completed in August, 1904. The front light is shown from a conical iron tower 30 feet to focal plane. It was raised 10 feet by adding a lower story composed of two tiers of iron panels, the new work being joined to the old at the flanges with drift bolts. The tower was placed on a new brick foundation. The pyramidal skeleton iron tower from which the rear light of the range was shown, was replaced by an octagonal frame tower 52 feet to focal plane, surmounted by a lantern, and was placed on a timber crib 24 feet square and 9 feet high. Both structures were painted white. Temporary fixed red lens-lantern lights were exhibited from these towers from June 5, 1904, until the close of navigation. The permanent lights are shown from fourth-order lenses. They were shown on the night of May 2, 1904, for the first time.

1913  Vidal Shoals Channel. Front Range Light. On November 22, 1913, the characteristic of the Front Range Light at Vidal Shoals was changed from a fixed red varied by red flash every ten seconds to occulting white every three seconds, thus, light 2 seconds, eclipse 1 second, and the intensity was increased from 1,400 to 3,000 candlepower, by changing the illuminant from oil to electricity. Rear Range Light. On October 30, 1913, the Rear Range Light was moved 233 yards 76 degrees from its present position and established on a black, skeleton, steel tower, with horizontally slatted white daymark. On November 22, 1913, the illuminant was changed from oil to electricity, and the intensity increased from 770 to 1,500 candlepower. The illuminating apparatus is a reflector.

1927  The iron tower that had served as the front range light of Vidal Shoals Range up until 1915 was used as the tower portion of the new Fourteen Foot Shoal Lighthouse built at the eastern side of the Straits of Makinac.

For a larger map of Vidal Shoals Range Lighthouse, click the lighthouse in the above map.