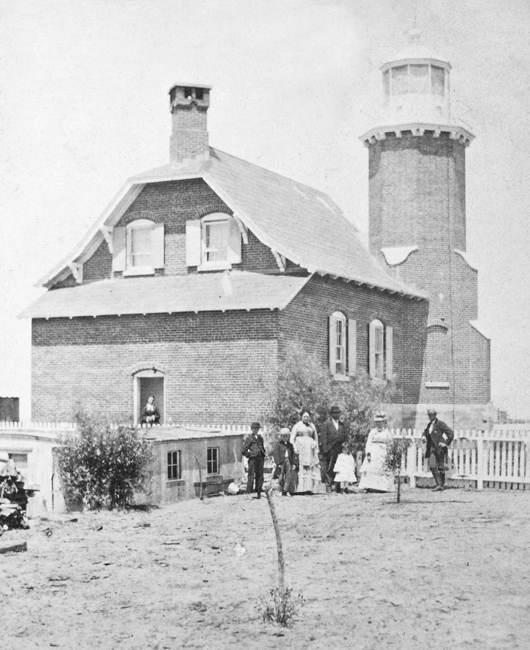 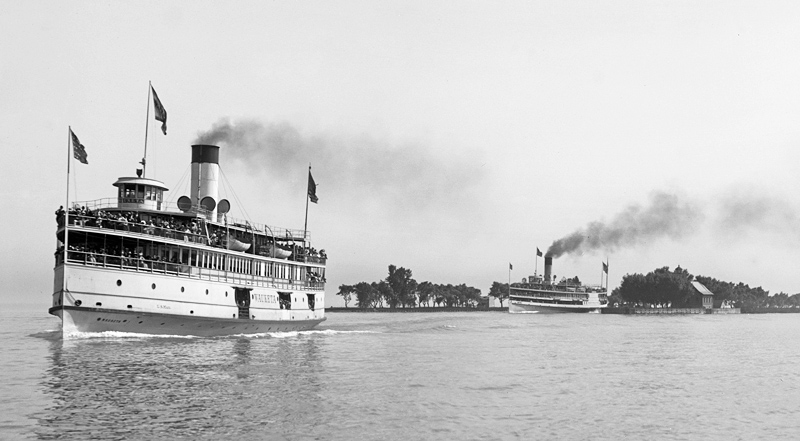 St. Clair Flats Canal.Before the construction of this canal the St. Clair River emptied, into Lake St. Clair through seven principal mouths or passes, the one most used being the South Channel. In 1866, in order to obtain a straight channel across the flats, a canal was commenced, and in 1871 finished to a depth of 13 feet, with a width of 300 feet, the channel being bounded on either side by a dike. In 1873 the channel was deepened to 16 feet for a width of 200 feet. In 1893 the project was to dredge the area between the dikes to a depth of 20 feet, and to continue a channel above the canal into the river, and below the canal into the lake.
The northern or river end of this channel was to have a bottom width of 650 feet, and from that to narrow gradually until the dikes were reached. Between the dikes a depth of 20 feet was to be maintained with a width of 300 feet for a distance of 7,221 feet. From the lake end of the dikes the width was to increase gradually until a bottom width of 800 feet should be attained, and this width to be continued to the 20-foot curve.

1865  The necessity for establishing a system of range-lights at St. Clair Flats has been brought to the attention of the board, and has received careful consideration. Deeming these ranges of manifest usefulness, a special estimate is submitted.

1867  St. Clair Flats.The timber crib requires some repairs, also the plastering in the dwelling. The crib upon which the beacon is erected has settled some, but no damage of any importance is expected to result.
An appropriation of sixty thousand dollars ($60,000) is available for ranges to complete the lighting of the channel over the flats. It being understood that a material change in the channel will probably be made, it was deemed prudent to wait until that question was determined. So soon as the excavation of the new channel is sufficiently advanced to warrant it, the construction of the necessary range-lights will be commenced.

1868  St. Clair flats and beacon.The crib-work on which the structures are situated needs some minor repairs; also the plastering of the dwelling, and the boat.
It is probable that the new channel across the flats, now being dredged under the direction of the engineer department of the army, will be completed by the close of navigation of 1869; and it is proposed to commence the construction of range lights to mark it, under the appropriation of $60,000 now available for the purpose, sufficiently early next season to secure their completion by the time the channel can be used.

1869  St. Clair Flats and beacon.Crib-work wants some repairing; both towers are slightly cracked, and the plastering of the dwelling is off in several places; but these repairs are not deemed important at present, in view of the erection of the range lights at either end of the new cut now in progress. Plans and estimates for these two light-houses have been approved and construction authorized by the board, and the foundation piling will be driven before the close of navigation. It is expected that the light-houses will be ready for occupancy by the time the channel can be opened for navigation.

1870  St. Clair Flats, Michigan, new channel.These two light-houses were in course of construction when work had to be stopped owing to the law of July 12, 1870, carrying to the surplus fund all unexpended balances. The building at the north end of the channel had then reached the height of the first floor. The building at the south end had reached nearly the same height. The new channel is expected to be completed before the close of navigation, and it is to be regretted that the lights cannot be shown at the same time the channel opens for navigation. The unexpended balance of $33,000, which under the law reverted to the treasury, would have been ample to have completed both light-houses. It is recommended that the above amount be reappropriated.

1871  Saint Clair Flats, new channel.By the act of July 12,1870, returning to the Treasury the available funds, work on these Light houses was suspended while in full progress, and it was not until the appropriation of March 3, 1871, became available that operations could be resumed. An adequate working force is now upon the ground, and the two stations will be ready for occupancy before the close of the season. Meanwhile, temporary structures have been erected, and everything is in readiness to exhibit lights, as soon as the announcement is made that the channel is open to navigation.

1872  Saint Clair Flats Canal.These two light-houses were completed as proposed in the last annual report, and were lighted for the first time on the night of November 15,1871. Simultaneously the temporary lights were discontinued. It was found that the foundations were liable to injury from the impact of rafts in tow of steam-tugs, as well as from other causes not connected with the construction. They were protected by special constructions, which thus far have proven perfectly satisfactory.

1885  Saint Clair Flats Canal (upper light), on the upper end of the western pier, South Pass, Michigan.The renewal of the piling and sheetpiling at the rear of the light-house is under contract, to be commenced in July and completed before September. A new boat-house, 12 by 28 feet in size, was built, painted, and provided with hoisting apparatus and a carriage for raising and hauling out the boat, and various minor repairs were made.

1886  Saint Clair Flats Canal (upper light), on the upper end of the western pier, Michigan.About 144 linear feet of piling and sheet-piling in the rear of the light-house were made by contract. The space between the old and new work was then filled with cedar bark and earth, 328 linear feet of picket fence were rebuilt, 184 linear feet of sidewalk were renewed, and certain other minor repairs were made.

1901  St. Clair Flats Canal (upper), Michigan. The station walks were renewed by the keeper. The material required to reline the interior of the lantern was purchased, and delivered at the station by the tender Amaranth.

1934  The removal of the west (center) dike at St. Clair Flats Canal to a depth of 25 feet and the dredging of the channels on either side to same depth was started under contract on October 7, 1933, and completed on August 7, 1934.

1935  See annual report, 1934, page 114. Sites for both range lights and for keepers dwelling have been acquired. Steel towers for all lights and all wood piling purchased and delivered on the sites. Materials for dwelling being purchased. Cost to June 30, 1935, $13,184.

1935  Thomas Garraty, keeper of Presque Isle Light Station, Lake Huron, retired from the Lighthouse Service on February 1, 1935. He was 65 years of age and had had 50 years of service. Mar. Garratys father, Patrick Garraty, is said to have been appointed lighthouse keeper by President Lincoln in the days before selection was made by Civil Service. The elder Garraty served for many years at various light stations. He was keeper of the first Presque Isle lighthouse which marked a harbor of refuge for sailing vessels. In 1870 when the new Presque Isle Lighthouse was finished Patrick Garraty moved to the new station with his family, and stayed in this assignment until retirement when he was succeeded by his son, Thomas. In the family also were sons John and Patrick and daughter Anna.
John Garraty became keeper at various lighthouses on the Great lakes. He entered the Service in 1904 and retired in 1930. The younger Patrick Garraty entered the Lighthouse Service in 1890, and is at present keeper of St. Clair Flats Light Station, having had 45 years service.
Miss Anna T. Garraty had the distinction of being one of the few women lighthouse keepers. She was made keeper at Presque Isle Range Light Station in 1903, and served there until 1926.
The records show that all members of the Garraty family rated high in efficiency. They were often commended for the excellent condition of their stations, and were consistently awarded Superintendents start and Commissioners stars for efficiency, as well as the Superintendents flag for the station found to be in the best condition at the time of annual inspection.

1936  St. Clair Flats Canal Range Light Station. The erection of a keepers dwelling, boathouse and radio remote control station is nearing completion. All of the signals, light, fog signal and radiobeacon on Lake St. Clair Lightship are controlled from this station about eight miles from the lightship. This project also included additional lighted buoys and the establishment of St. Clair Flats Canal Range Lights.

1937  St. Clair Flats Canal Range. See 1936 annual report. The keepers dwelling which was under construction at the beginning of the fiscal year has been completed, this concluding the work on this project. Cost, $31,048.

1937  Improvements in the channel across Lake St. Clair and in the St. Clair River necessitated moving and improving the range lights and other aids to navigation in the vicinity. Lake St. Clair Flats Canal Range Light Station was entirely rebuilt, the range now occupying two sites about 4,000 feet apart. The front light is located on a 40-foot and the rear light on a 100-foot standard structural-steel tower with sold daymarks on the range sides. The tower foundations are concrete piers supported on wooden piles. The illuminating apparatus for each light is a 14-inch locomotive headlight reflector using 110-volt commercial electric current providing a light of 120,000 candlepower. A small generator set was installed as stand-by equipment for both lights.
A six-room keepers dwelling adjoins the front light and serves also as the control station for the radio-controlled Lake St. Clair Lightship (no. 75), 8 miles away.

For a larger map of St. Clair Flats Canal Upper Lighthouse, click the lighthouse in the above map.