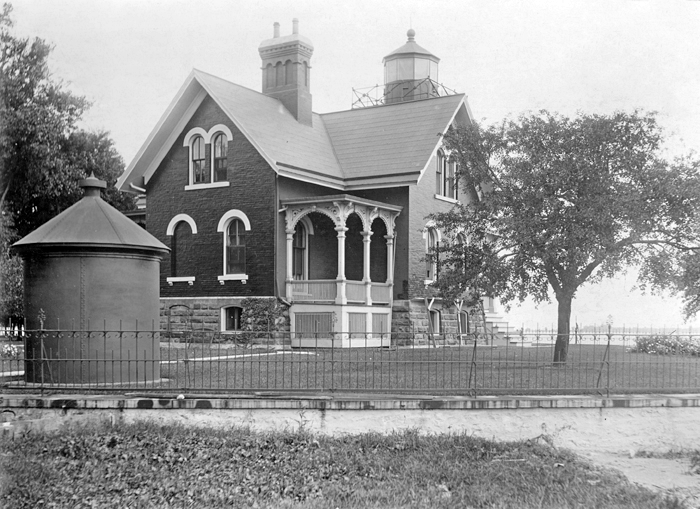 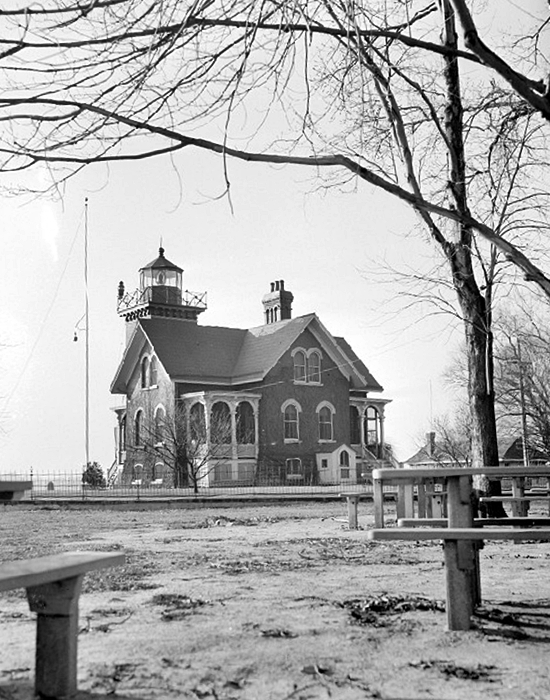 1877 - Head of Belle Isle, Detroit River, Michigan.A light should be established at the northern point of Belle Isle to guide vessels into the south channel of the Detroit River, which is almost exclusively used. The reefs extending out from Isle aux Peche and Belle Isle make it difficult to strike this channel in dark nights, and a large number of vessels annually ground on one or other of these reefs. They are almost invariably compelled to call tow-boats to their assistance and are thus subjected to loss of money and time. An appropriation of $10,000 for this station is recommended.

1878  Head of Belle Isle, Michigan.A fixed red light should be established at the head of Belle Isle, to guide vessels into the channel south of the island and enable them to avoid the reefs which make out from Isle aux Peches and Belle Isle. This has been referred to in the last four annual reports. An appropriation of $10,000 is needed for this station.

1879  Head of Belle Isle, Michigan.A fixed red light should be established at the Head of Belle Isle, to guide vessels into the channel east of the island and enable them to avoid the reefs which make out from Isle aux Peches and Belle Isle. An appropriation of $10,000 is recommended for this station.

1880  Head of Belle Isle, Detroit River, Michigan.An appropriation of $10,000 was made by Congress, at its last session, for the erection of a light at this point. The work will be commenced as soon as possible

1881  Belle Isle, Detroit River, Michigan.The title to the site for a lighthouse at the head of this island was approved, and the necessary structures will be built during the present season.

1882  Belle Isle, on Belle Isle, at the head of the Detroit River, Michigan. The tower was completed and the light was shown for the first time on the night of May 15, 1882. The keepers dwelling was begun and carried up to the first floor, and will soon be completed, as the appropriation of $6,000, made for the purpose by act of August 7, 1882, has become available.

1883  Belle Isle, at head of Belle Isle, Detroit River, Michigan. With the appropriation of $6,000, made August 7, 1882, the erection of a light-house tower, keepers dwelling, and boat-house, and the construction of a stone retaining-wall around the site were completed at the northern end of this island, and an iron railing was constructed, part of it was set in place on top of the retaining-wall, and the grounds around the dwelling and tower were sodded. When the erection of the railing is finished, the station will be complete and in good order.

1889  Belle Isle, Detroit River, Michigan.The pier under the bridge leading to the dwelling was rebuilt, and various minor repairs were made.

1890  Belle Isle, Detroit River, Michigan.The sidewalks were rebuilt. A boat-landing was constructed with a walk leading to the boat-house. The water supply was improved and a sewer pipe was laid from the dwelling to the channel bank. A circular iron oil-house, of 225 gallons capacity, was delivered at the station and will soon be erected.

1898  Belle Isle, Detroit River, Michigan.On account of the high water, the boathouse was moved 60 feet shoreward to a safe position. The grounds were graded with 275 cubic yards of clay and loam, and one part sodded and the other seeded with lawn grass. The sidewalk around the dwelling and to the boathouse were renewed. Repairs were made.

1935  A combined flagpole and light mast was designed for Belle Isle Lighthouse at Belle Isle Park on the Detroit River in the eleventh district and erected near the river as an alternate to raising the tower of the main lighthouse structure, or carrying out extensive trimming of the foliage from park trees which would otherwise have been necessary. The combined pole was made of pleasing appearance to harmonize with its surroundings. It is 70 feet in height from the ground to the top and carries a bracket at a height of 40 feet on which a 300 mm aluminum lantern is supported. This elevation is practically the same as the present light tower. The lantern can be raised or lowered by a small hand winch adjacent to the pole and is equipped with a 300-watt electric lamp using commercial power. The electrical circuits are arranged so that a warning bell is operated and a reserve light in the main tower is turned on in the event of current failure. Plans of the combined mast and flagpole are available in the office of the superintendent of lighthouses, Detroit, Mich.

For a larger map of Belle Isle Lighthouse, click the lighthouse in the above map.

A modern light is exhibited from this location today.