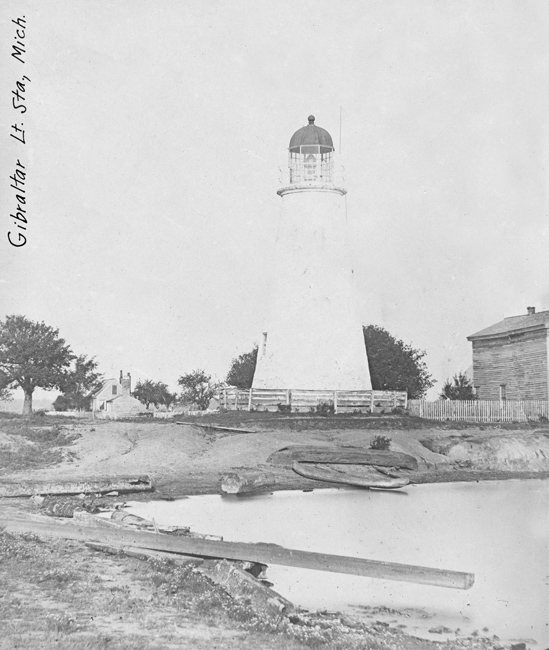 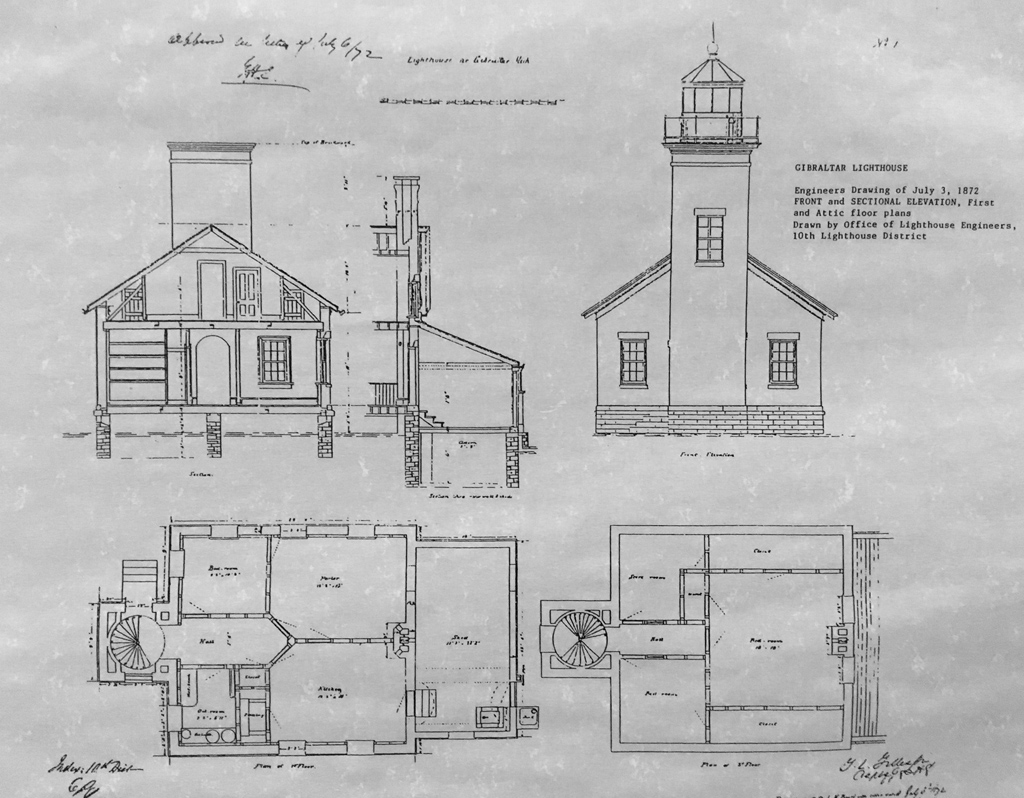 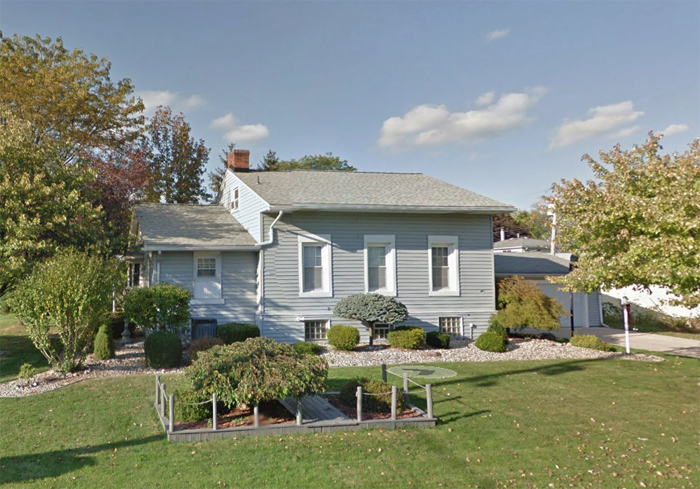 1838  Gibraltar light-house, at the mouth of Detroit river, on the western channel.This is lighted with eleven lamps and an equal number of reflectors, fixed. It is a new building, and in excellent order, although (in consequence of the severe indisposition of the tender) there had probably been just grounds of complaint for a few days preceding my inspection of the establishment. I am inclined to believe, however, that the keeper is doing his utmost, and will, on his recovery, give perfect satisfaction.
The dwelling is also a new building, of brick, and without fault, except that the cellar requires draining, and the chimneys are out of order. To remedy the former fault, it will be necessary to dig a trench of thirty rods, at a cost of thirty dollars, including all the contingencies. Weather-fenders, it is presumed, will remedy the latter defect, at an expense of six dollars each; making a total cost of forty-two dollars.
This is an important light, and the termination of the line of light-houses between Buffalo and Detroit, being eighteen miles distant from the latter place.

1843  That the secretary of Treasury be directed to pay to Andrew Fisher, the sum of $79, being amount of expenses incurred by him in repairing the lighthouse keepers house at Girbraltar, on Detroit River, for damage done by U.S. troops under General Brady in 1838. March 3, 1843.

1850  Gibraltar, June 24, 1850. The light house at this place is in good order. The dwelling wants one new eves-trough; one chimney wants repairing; wants new cellar doors; several window shutters want rehanging; all want painting, together with other small repairs, which will require an appropriation of $50. This will put the dwelling in good order. Conduct of keeper good.

1868  Gibraltar.Extensive repairs are reported as necessary at this station. The tower leaks, and it is with difficulty that the main door of the tower can be opened, the pressure above the sill having caused it to settle. The lantern leaks, and lantern doors do not close tightly. The roof of the dwelling leaks, and the house is thoroughly wet in rainy weather. The ceilings need replastering. Fences and well are out of order.

1871  Gibraltar, Lake Erie, mouth of Detroit River, Michigan. An appropriation of $10,000 is recommended to rebuild the tower and keepers dwelling at this station. The present buildings are very old, and not worth repairing.

1872  Gibraltar, mouth of River Detroit, Lake Erie, Michigan.An appropriation was made June 10,1872, for rebuilding tower and keepers dwelling at this station. It is proposed to remove the old tower, relinquish the site, and to erect the new buildings upon the lighthouse lot. Sealed proposals will be publicly invited at an early day for the supply of the necessary building materials. The plans contemplate a tower, and dwelling attached, constructed of brick. It is expected to complete the work before the close of the working season.

1873  Gibraltar, Detroit River, Michigan.An appropriation was made, June 10,1872, for rebuilding the tower and dwelling; sealed proposals were publicly invited, in July, for the delivery of the necessary materials, but without result. Except the metal-work for the tower; the materials had to be purchased in open market.
A temporary tower was built, and a light from a steamer-lens was exhibited August 10, 1872.
The old tower was removed, as also the old dwelling, and the new buildings, a tower with dwelling attached, of brick, erected upon the light-house lot.
The buildings were completed in January, 1873, and the dwelling occupied February 1, 1873.
The focal plane of the new tower is 47 feet above the level of the river Detroit.

1879  Gibraltar, Detroit River, Michigan.This station has been discontinued and the apparatus removed.

1879  Gibraltar, Detroit River, Michigan.The light at this station was discontinued on the opening of navigation in 1879, and a custodian put in charge of the property; since then no repairs have been made to the station by the Light-House Establishment.

1887  Gibraltar, Detroit River, Michigan.The light at this station was discontinued on the opening of navigation in 1879, and a custodian put in charge of the property; since then no repairs have been made to the station by the Light-House Establishment.

1891  Gibraltar, Detroit River, Michigan (discontinued).A custodian, at a nominal salary, is in charge of the premises. Various repairs were made.

1895  Gibraltar, Michigan (discontinued).The buildings and grounds were sold at public auction. The lantern and iron stairway of the tower were reserved. (The lantern room was subsequently used at South Bass Island Lighthouse in Ohio).

For a larger map of Gibraltar Lighthouse, click the lighthouse in the above map.

The dwelling portion of the lighthouse remains standing near the intersection of Munro Street and Grandview Drive in Gibraltar.