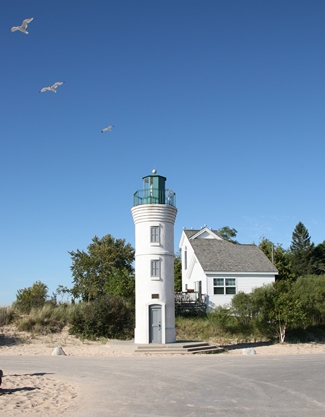 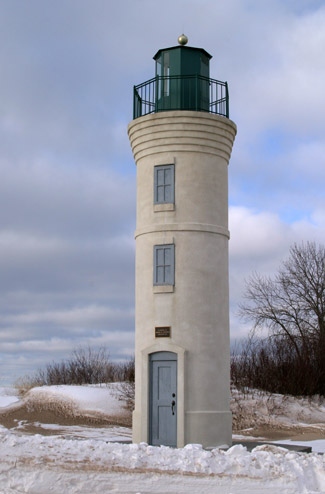 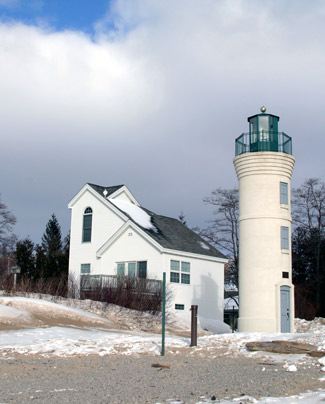 Empire, located on the eastern shore of Lake Michigan and now surrounded by Sleeping Bear Dunes National Lakeshore, was named after the schooner Empire, which was icebound in the area during a storm in 1865. George Aylsworth operated the first lumber mill at Empire between 1873 and 1883, and Potter and Struthers built a second mill in 1885. After purchasing the Potter and Struthers mill in 1887, the T. Wilce Company developed it into the Empire Lumber Company, which became one of the largest hardwood mills in the region, capable of outputting up to twenty million feet of lumber each year. Docks were built to facilitate the export of the lumber, but not a lighthouse. When the Empire Lumber Companys mill burned down in 1917, it was not rebuilt, as most of the areas virgin timber had been harvested.

Born in 1927, Robert H. Manning was a life-long resident of Empire and worked as an insurance salesman and then as a civilian worker in supply for the Empire Air Force Station. In his spare time, Manning was an avid fisherman, and while returning to shore after an outing on Lake Michigan, he often lamented that there wasnt a lighthouse at Empire to guide him home. After Manning passed away in December 1989, his family and friends raised funds to erect a lighthouse in his honor. While many think the lighthouse resembles the tower at Point Betsie, with three openings on one face and the tower flaring out to support the lantern room, the Manning family used an architect in Traverse City to come up with their own design. Robert H. Manning Memorial Lighthouse was dedicated in 1991.

The lighthouse is listed in the Coast Guards Light List as Manning Light, a private aid to navigation that emits a white flash every four seconds at a focal plane of thirty-eight feet and is maintained from April 15 to November 15.

For a larger map of Robert H. Manning Memorial Lighthouse, click the lighthouse in the above map.

Two blocks north of the junction of Highways 22 and 72 in Empire, take Niagara Street west to Village Park. You can drive to Manning Memorial Lighthouse, which is at the northern end of the park.

The lighthouse is owned by the Town of Empire. Grounds open, tower closed.


The Empire Area Museum has a panel on the lighthouse along with numerous displays interpreting Empire's past.