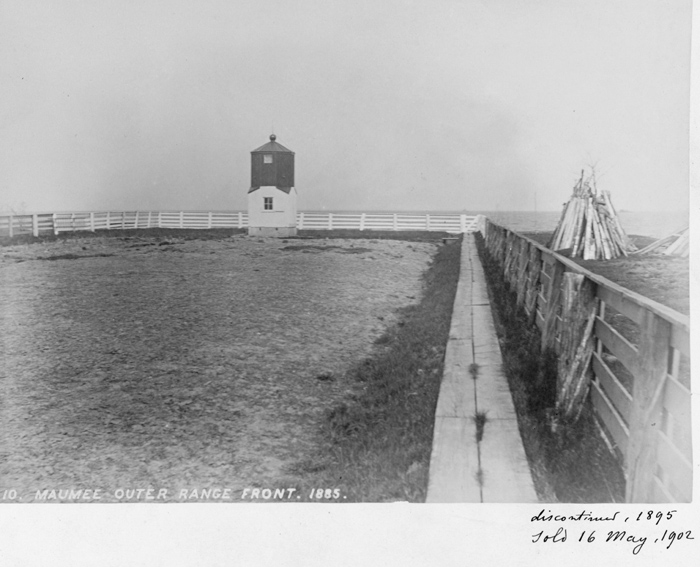 1869  Maumee Outer range.A plank walk has been made connecting the two lights. Nothing further is needed at present.

1870  Maumee Outer Range, Ohio, Maumee River.These two lights are placed in small frame towers, without conveniences for the keeper or supplies. The appropriation which was made at the time they were authorized to be built was inadequate and no dwelling for the keeper could be built. An estimate of $3,000 has been submitted for that purpose.

1871  Maumee Outer Range, Toledo, Ohio.An appropriation was made March 3,1871, to build a light-keepers dwelling at this station. Sealed proposals were publicly invited to June 3, for the construction of the dwelling, and a contract has been made. It will be a frame dwelling, one story and attic, placed on the west end of the range, and behind the inner range tower. It is expected that the dwelling will be ready for occupation by the 20th of September.

1872  Maumee outer range, (rear,) Toledo, Ohio.Work in progress at date of last report was satisfactorily completed in October. The dwelling was accepted and the keeper immediately installed. There are two points in the southwest channel through Maumee Bay, Ohio, which require to be marked by day-beacons. The one is in the position now occupied by red can-buoy No. 2, and the other is that occupied by black can-buoy No. 1. Vessels making the harbor frequently strike these buoys and either break their moorings or drag them out of the place, to the great embarrassment of shipping. Vessels are continually grounding in the bay from this cause. The foundation and superstructure of the beacons should be made of 12-inch pine timber, framed and bolted like ordinary crib-work for harbor-piers, and filled with heavy stone; the foundation to be 30 feet square, sunk in 10 feet water, and its exposed angles protected by piling. The superstructure will be sheathed on the outside with heavy oak timber. The whole will be surmounted by an iron cage. One beacon will be painted red and the other black. An appropriation of $12,000 is required for these beacons.

1874  Maumee outer range, (front,) Maumee Bay, Lake Erie, Ohio.The slight protection to the slope has been washed away, and the water encroaches at such a rate that the front tower is endangered. A bulkhead of protection is necessary, and for this purpose the sum of $2,000 is required.

1875  Maumee outer-range beacon, (front,) Maumee Bay, Ohio.An appropriation of $2,000 was made March 3, 1875, for the protection of the shore in front of this beacon, which had been steadily wearing away under the action of the water. A substantial construction of timber and rubble has just been completed.

1876  Maumee outer range, Lake Brie, Ohio.The lake front at these ranges is subject to the destructive action of the lake during gales, and was protected in 1875 by a substantial construction of crib-work and riprap, which has been very efficient. It is to be regretted that the adjoining private property on each side is not similarly protected. The severe gale of May 15, 1876, washed these unprotected shores so much that some additional riprap was required in front of the lighthouse site.

1880  Maumee Outer Range-beacons, Maumee Bay, Lake Erie, Ohio. Some 868 feet of fence were built. The lower part of the dwelling was sheathed and the drain repaired.

1884  Maumee outer range beacons, west shore of Maumee Bay, Ohio.A brick foundation was placed under both beacons and the board fence inclosing the site and reservation was repaired.

1895  Maumee Outer ranges, Maumee Bay, Lake Erie, Ohio.On the establishment of the Manhattan range lights at North Toledo, on the opening of navigation, 1895, these lights being of no further use were discontinued. The illuminating apparatus was sent to the Buffalo light-house depot for storage.

For a larger map of Maumee Outer Range Lighthouse, click the lighthouse in the above map.