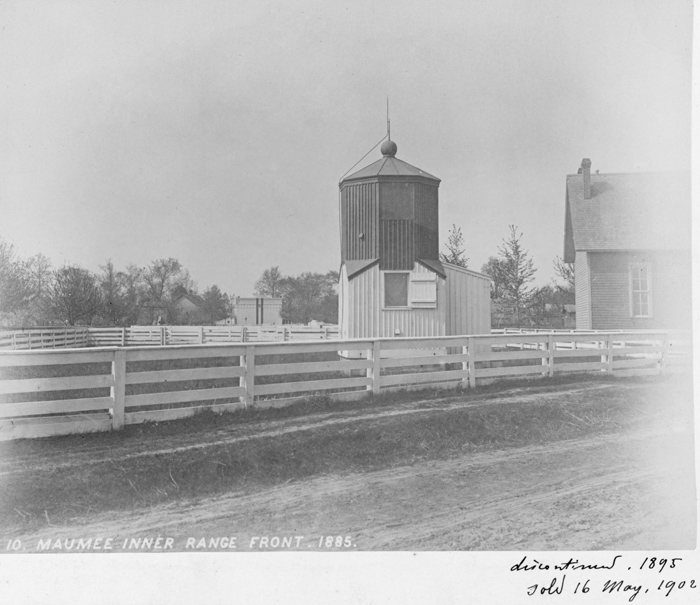 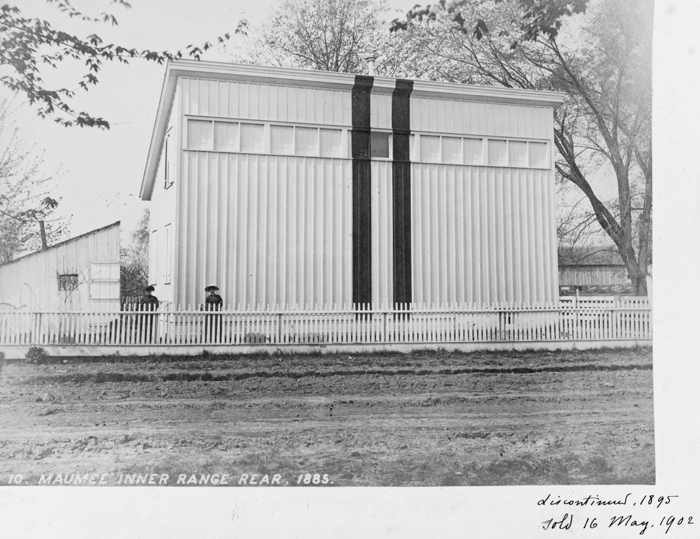 1869  Maumee Inner range.A few repairs have been made in the dwelling, and the cellar drained. When the premises are inclosed they will be in good condition.

1880  Maumee Inner Ranges, Maumee Bay, Lake Erie, Ohio.Black stripes were painted on the rear beacon as a day-mark. Some repairs were made to the dwelling and out-houses.

1883  Maumee Inner Ranges, on east bank of Maumee River, Ohio. The railroad company, which has for years trespassed on the lighthouse lot by running its track across it, has at last taken up its track, and the entire lot is now fenced in one section. A small frame oil room was constructed about 50 feet from the dwelling, and various minor repairs were made.

1884  Maumee inner range beacons, east bank of Maumee River, Ohio.A brick foundation was placed under the front range, the walks around the dwelling and leading to the front range were renewed, and the barn and fence inclosing the site were repaired.

1885  Maumee inner ranges, on the east bank of Maumee River, Ohio.A plank walk, 6 feet wide and 78 feet long, was laid in front of the light-house lot, and the roof of the dwelling was reshingled.

1894  Maumee Inner range, Maumee Bay, Lake Erie, Ohio.Some 70 feet of sidewalk on the east side of the street in front of the keepers dwelling were relaid with new material in compliance with notice from the city authorities.

1895  Maumee Inner range, Maumee Bay, Lake Erie, Ohio.A fire destroyed about 300 running feet of the reservation division fence. The front beacon was saved by the local fire department. Buildings re-erected close to the boundary line of the light-house lot make it unnecessary to restore that portion of the destroyed fence. The lights of this range were discontinued on the establishment of the Manhattan range at North Toledo, and the illuminating apparatus was transferred to the latter for lighting the beacons of that range.

For a larger map of Maumee Inner Range Lighthouse, click the lighthouse in the above map.