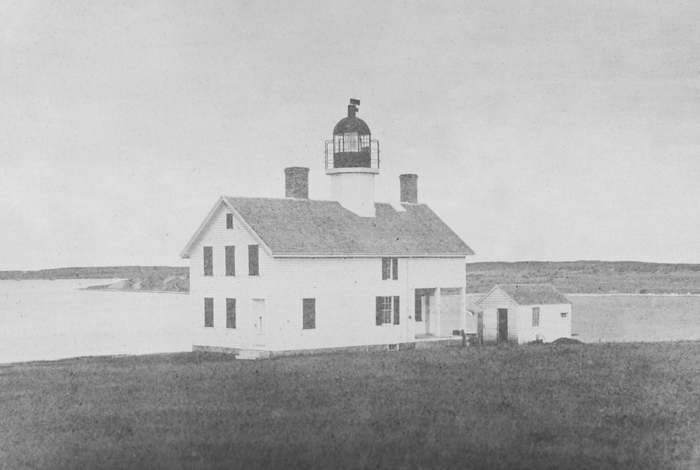 1853  In the second district, embracing the entire coast of Massachusetts, which includes Boston bay, Buzzard bay, Vineyard sound and tributaries, Commodore John Downes, United States navy, who was succeeded by Lieutenant S. R. Knox, United States navy, as inspector, and Major C. A.Ogden, United States corps of engineers, charged with the construction and repair of various works in the district, in addition to the ordinary routine duty of keeping the buoys in their proper positions; raising, cleaning, painting, and replacing them at the proper times,&c making the ordinary repairs to light house towers, buildings, and illuminating apparatus, and keeping the numerous light-vessels at their stations in an efficient condition, sites have been selected, and plans and estimates submitted for erecting the light-house at Bass river, and for three small light-houses at Holmes Hole harbor. Preliminary steps have also been taken for maturing a plan for the light-house authorized to be placed on the " Sow and Pigs." A hydrographic and topographical survey of this locality, with a report, has been furnished by the Superintendent of the Coast Survey. The beacons in Newburyport harbor have been rebuilt, or are in course of repair.

1854  Light-houses at the head of Holmes', Hole harbor. -The sites for the beacons, or bug-lights, have been established, and the land purchased. Proposals have been received, but no contract yet made for their erection.
No expenditure. <>1855  Light-house at the head of Holmes's Hole harbor.The three beacon lights were completed and lighted on the 4th December, 1854. The keeper's dwelling-house is nearly finished.

1857  A lantern has been placed on the keepers dwelling-house at Holmes Hole harbor, and a fourth-order lens fitted, as a substitute for the three lights designed for ranges into the harbor.

1858  The three beacons at Holmes Hole have been replaced by a single beacon, giving increased efficiency to the light station, and at a considerable saving of annual supplies.

1859  Congress at its last session having empowered the department, upon the recommendation of the Light-house Board, to discontinue from time to time such lights as may become useless by reason of mutations of commerce and changes of channels of harbors, and other causes, the following lights have been dispensed with, viz: Point Gammon, Holmes Hole.

1859 - The third section of the act of Congress, approved March 3, 1859, making appropriations for lighthouses, light-boats, buoys, &c.. authorized the Secretary of the Treasury, in his discretion, on the recommendation of the Lighthouse Board, to discontinue, from time to time, such lights as may become useless, by reason of mutations of commerce, and changes of channels, of harbors, and other causes. The Lighthouse Board, at its meeting held on the 18th instant, recommended that the following named light be discontinued, viz.:Holmess Hole beacon, at the head of Holmess Hole Harbor, Massachusetts. It is therefore ordered and directed, that the aforesaid light be discontinued on and after the 1st day of December next. By order of the Secretary of the Treasury, R. SEMMES, Secretary.

1860 -The light at Holme's Hole having been deemed useless, was discontinued on the 1st December last.

For a larger map of Holmes Hole Lighthouse, click the lighthouse in the above map.