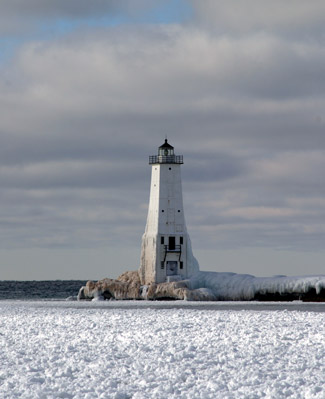 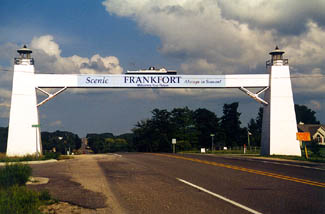 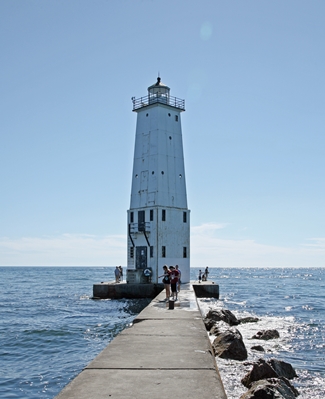 Named Rivière Aux Bec Scies by the French, meaning river of sawbill ducks, the fifty-four-mile-long Betsie River expands into Lake Betsie just before emptying into the eastern shore of Lake Michigan. The first known European to settle on Lake Betsie, the site of todays Frankfort, was Joseph Oliver, who purchased fourteen acres between Lake Betsie and Lake Michigan in 1852. A Detroit company owned by Ransom Gardiner and George S. Frost purchased most of the land around Lake Betsie in 1859 and dispatched Louis A. Doby to oversee the development of the area, including the dredging of a channel between Lake Betsie and Lake Michigan. Growth slowed during the Civil War years, but in 1866, the federal government stepped in and allocated $98,541 to commence improvements of Frankfort Harbor that included a new cut between the lakes that would be held in place by parallel piers, spaced 200 feet apart. Work got underway in July 1867 and continued for the next decade, during which time nearly $200,000 was spent on the project.

A pierhead light, accessed by an elevated walkway, was built at the outer end of the south pier and commenced operation on October 15, 1873 with John H. King serving as its first keeper. The fixed red light, shown at a height of twenty-five feet above the pier from a white framework tower, was produced by a sixth-order Fresnel lens and could be seen for over eleven miles. As was typical with most pierhead lights, this beacon was relocated multiple times as the pier was extended lakeward. The first move occurred in 1880, when the light was moved 261 feet, and the same length of new elevated walk was built. The beacon was moved another 195 feet in 1884, the same year an oil shed and boathouse, equipped with a crane and winch for hoisting the stations boat, were built at the inner end of the pier.

The Lighthouse Board requested $1,000 in 1891 for installing a fog bell on the pierhead to serve mariners when thick weather prevented the light from being seen, and Congress supplied this amount on August 5, 1892. Work commenced on the pier on April 14, 1893, and the bell, struck at regular intervals by machinery, was placed in operation on June 15 from atop a pyramidal tower that stood just behind the light tower.

On November 15, 1896, the light tower and new fog-bell tower were moved to the outer end of the south pier, and a rear light was established on January 22, 1897, 600 feet from the outer end of the pier and roughly in the center of the piers elevated walk. In 1900, the striking apparatus for the fog bell was shipped to the St. Joseph Lighthouse Depot, and the base of the light tower was enclosed to house a fog signal apparatus formerly used at Chicago Pierhead Lighthouse. The siren, which consisted of a two-horsepower oil engine with a blower siren and copper trumpet, commenced operation on May 11, 1901, and, as the siren had no duplicate, the fog bell was kept in place in case the siren was disabled. A back-up oil engine was installed in the tower in 1905, and the bell was shipped to the storehouse in Milwaukee. The siren was typically in operation for about 300 hours each year and burned roughly eighty gallons of oil.

Sheridan King transferred to Frankfort from North Manitou Lighthouse in March 1902 to begin serving as assistant keeper to Joseph H. Wilmot as a second keeper was needed to help with the fog signal. The following tragic incident, as recorded by Scotts New Coast Pilot, happened just three months later:

Sheridan King, assistant lightkeeper at Frankfort, Michigan, was killed at that port last Friday by an Ann Arbor carferry. The captain of the ferry called to King to get his small boat out of the way of the steamer. King started to do it, but he was caught by the steamer and crushed to death. A dispatch from Frankfort says that the accident aroused much indignation against the captain of Ann Arbor carferry No. 3. The light keepers boat was in the path of the carferry as she started to leave port, and Capt. W. P. Robertson called to King and asked him to get out of the way, the latter started to do so, but the carferry kept on and crushed the little boat like an egg shell and Mr. King with it. He lived about fifteen minutes. The carferrys captain saw the accident, but instead of stopping to learn of its seriousness, continued across the lake. Those who were witnesses claim that the ferry might have stopped in time to save Kings life. The latter was about 20 years of age and leaves a widow.

Keeper Joseph Wilmot also died on duty. One night in August 1911, Keeper Wilmot rowed out to the pierhead to start the fog signal, accompanied by his wife who insisted on accompanying her husband as he was not feeling well. The local paper recorded what happened next:

Spurred by his sense of duty the keeper managed to get out to the end of pier and dragged himself through the task of starting the mechanism of the fog signal. Then with a groan, he turned to his wife. Im sick, said he, Im deathly sick. Mrs. Wilmat ran down the steps of the light and started for the mainland to get help. Finding a couple of boys on the pier she sent them for help and returned to her husbands side. In a few minutes Captain Morency had reached them. Picking up his old comrade he carried him like a baby down the stairs and out upon the pier hoping that the fresh night air would revive him. And there, in a hastily contrived bed of blankets, the keeper of the light breathed his last a few minutes later.

For the first several decades Frankfort Pierhead Light was in operation, no dwelling was provided for its keepers, as evidenced by the following request made by the Lighthouse Board in 1903:

In 1912, the range lights were moved to the north pier, with the front light being displayed at a height of forty-six feet from a white, steel, pyramidal tower and the rear light from a white wooden post, 200 yards from the front light, at a focal plane of sixty-six feet. The air siren was relocated from the south pier to the front range light on the north pier, where it served until an air diaphone was installed in 1919, the same year the north pier lights were electrified. The new south pierhead light was a white flash every three seconds exhibited from a grey pyramidal structure. The color of the light and tower on the south pier was changed to red in 1917. An oil house, storehouse, and watchroom were located at the foot of the north pier.

On March 3, 1925 a harbor improvement project was adopted for Frankfort calling for the construction of arrowhead breakwaters to form an exterior basin with a depth of twenty feet at a cost of $987,000. Work on the south breakwater commenced in 1928 and was completed in 1931, when an acetylene light was established atop a thirty-one-foot tower to mark its outer end. The north breakwater was built in 1932, and the steel tower, along with its fog signal, was transferred by scow on August 8, 1932 from the north pier to the outer end of the new breakwater, where a twenty-five-foot steel base had been prepared to receive it.

A fourteen-room duplex used at Chicago Pierhead Lighthouse was moved to Frankfort in 1932 and placed upon a foundation near the north pier. To reach its new home, the dwelling was placed aboard a scow and towed to Milwaukee and then across the lake to Frankfort by the lighthouse tender Sumac. The relocation was estimated to have saved the government $15,000. A radiobeacon was established on the north breakwater on December 31, 1932.

A Notice of Availability, dated June 28, 2010, announced that Frankfort North Breakwater Lighthouse was excess to the needs of the United States Coast Guard and would be made available at no cost to eligible entities defined as Federal agencies, state and local agencies, non-profit corporations, educational agencies, or community development organizations for educational, park, recreational, cultural or historic preservation purposes. Qualifying organizations were given sixty days to submit a letter of interest. In 2011, it was announced that ownership of the lighthouse would be transferred to the City of Frankfort.

Frankfort Lighthouse has long been a symbol of the citys maritime heritage, and its likeness was incorporated into a gateway arch in 1925 to welcome travelers to the community. The arch features a replica of the car ferry City of Green Bay that rests on a crossbeam supported by twin lighthouses. When originally built, the support lighthouses were made of stone gathered from Lake Michigan. Another version of the arch, which has been rebuilt and moved multiple times, featured concrete lighthouses, while steel towers are used in the arch that currently spans M-115.

For a larger map of Frankfort North Breakwater Lighthouse, click the lighthouse in the above map.

The lighthouse is owned by the City of Frankfort. Grounds open, tower closed.