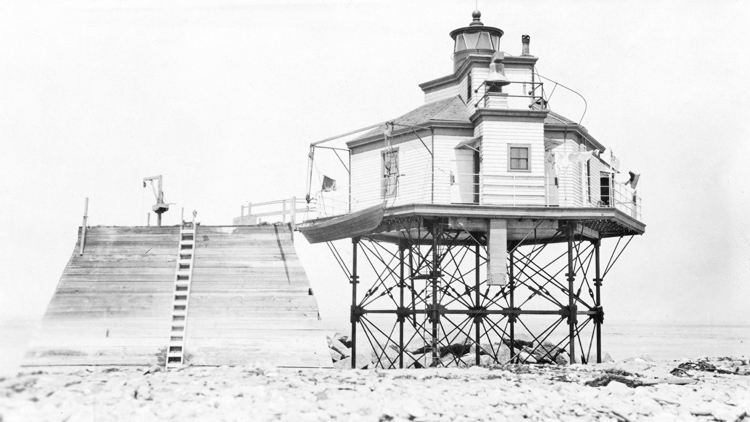 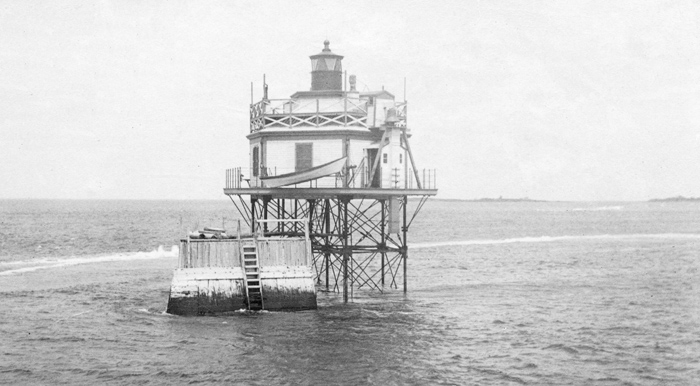 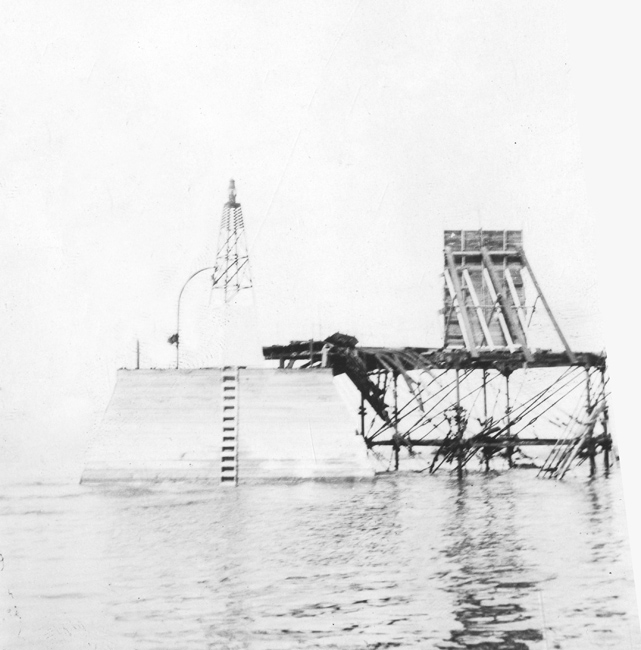 1855  Light-house on the Spit at the entrance of the Narrow's, Boston harbor.Bids have been received and accepted for the completion of this work by the 1st December, 1855.

1855  A contract was made with Harrison Loring, on the 1st July, to complete the light-house on the Spit at the entrance of the Narrows, Boston harbor, by the 1st December, 1855.

1856  The light-house at Brants Point, Nantucket, at Egg Rock, and at the Narrows, and the Point Alderton Bar beacon, Boston bay, have been completed.

1863  Boston Narrows, this structure, which had been run into by a vessel and materially damaged, has been repaired in iron and wood work, new ladder and tackle supplied.

1867  At the Narrows, the ice breaker built to protect this structure, and which was carried away last winter by the sea, has been thoroughly rebuilt of oak piles secured with girders ballasted with stone, planked all over, shod with iron, and painted with red lead; iron piles, tension bars, &c, of the light-house foundation scraped and repainted with red lead; superstructure painted inside and out.

1868  Narrows.Ice-breaker painted; flight of wooden landing steps renewed; galvanized ventilators on two chimneys having rusted out, were removed at the roof and chimneys retopped with brick, with an arch turned on each and painted; illuminating apparatus examined, repaired, and adjusted; new stove fixtures, oars, boat-falls and moorings, and chest of tools, supplied.

1882  Narrows, northerly side of main entrance to Boston Harbor, Massachusetts.The exterior of the building was repainted and the windows repaired, the ice-breaker was partially rebuilt and replanked where required.

1886  Narrows, Great Brewster Island, Boston Harbor, Massachusetts. The lantern-deck, with its stairs and railing, and the platform and railing around the roof of the dwelling, were all renewed, and numerous minor Repairs to the dwelling were made.

1889  Lightning conductors were provided and attached to the towers at the following stations.

1891  The Narrows, entrance to The Narrows Channel, Boston Harbor, Massachusetts.The gallery around the dwelling was widened and was rebuilt, with the fuel and other outhouses upon it. It was also provided with an iron railing, new outer stairs were made, and the ice breaker was repaired.

1920  A.A. Small, keeper, piloted steamer Mondoir to Boston, the captain of vessel having lost his bearing.

1920  Arthur A. Small, keeper, rendered assistance to the motor yacht Alert, which had run on a ledge in the vicinity of station with seven passengers aboard. Happened on Sept 26, 1920.

1921  Arthur A. Small, keeper, Narrows Light Station, Mass., rescued three fishermen whose boat had become disabled and who were benumbed by ice and cold, secured the boat with a kedge anchor, and furnished the men with food, lodging, and dry clothing. Happened on Dec 22, 1921.

1923  Tom Small, keeper, rescued a man from a rowboat which had been caught in a heavy ice floe and was drifting toward the sea. Happened on February 20, 1923.

1923 - Tom Small, keeper of The Narrows Light Station, Mass., on August 1, towed a disabled motor craft and occupants to safety.

1925  Tom Small, keeper of the Narrows Lighthouse, Mass., on August 11 rendered assistance to a disabled Navy hydroplane in towing it to safety and summoning aid.

1929 - The Narrows Light Station, established 1856, in Boston Harbor, was completely destroyed by fire on June 7, 1929. For a week previous to that date the keeper had been engaged in burning and scraping paint from the dwelling, a wooden frame structure set on screw piles. The job was nearing completion when sparks from the torch being used ignited under the eaves and worked their way rapidly inside and under the roof. Although the fire extinguishers at the station were immediately put into play, it was obvious that any attempt to extinguish the fire was useless and within 15 minutes the entire station was enveloped in flames. With the exception of a few small articles, all furnishings and equipment were a total loss. The lantern which was mounted on the center of the dwelling roof and the 1,000-pound fog bell fell when the roof and timbers crashed to the ground. The keeper in trying to save several articles escaped being struck by the falling bell by only a few inches. Until a new flashing red light on a steel tower is established together with a bell buoy, a combination gas and bell buoy marks the station.

Formerly located on the western end of the spit making out from Great Brewster Island and on the northeast side of the entrance to The Narrows Channel.
Latitude: 42.323056, Longitude: -70.919722

For a larger map of Narrows Lighthouse, click the lighthouse in the above map.

A modern light, known in 2018 as Light 4 on the Coast Guard Light List, stands near this location today.