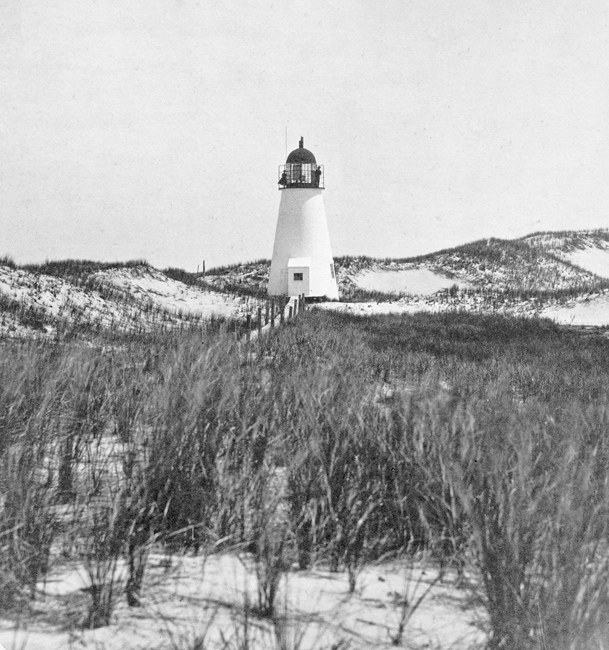 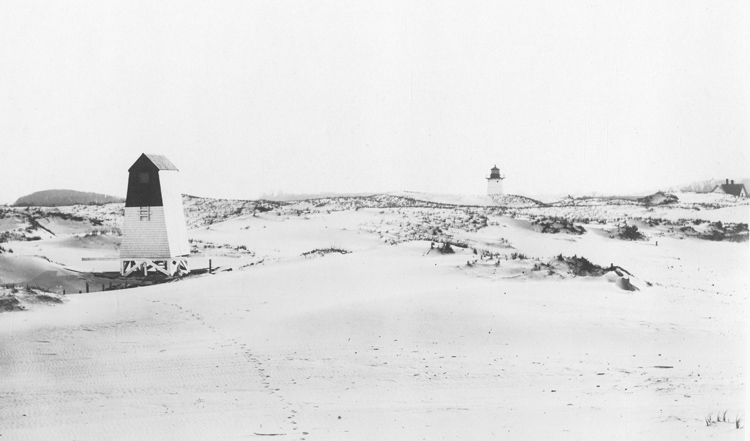 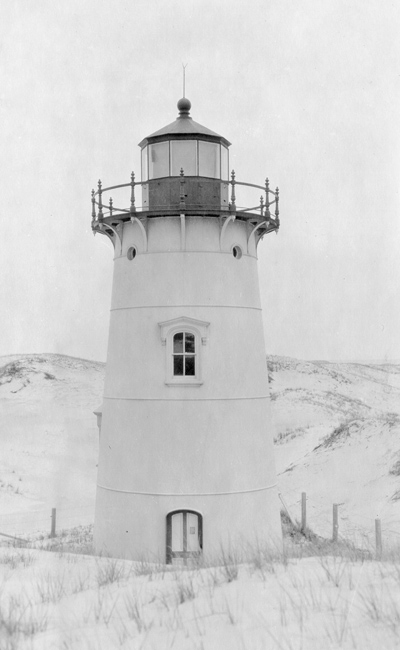 1837  Two small light-houses on proper sites at, or near, Ipswich harbor.

1838  Ipswich lights.These lights are in good order, but are very badly constructed; the upper frame is the same size of the lower frame, and exposes the reflectors to the blaze of the lower lights.

1842  I.W.P Lewis Report: The light-houses of Massachusetts are constructed of rubble stone, brick, or wood, the details being in all respects the same as those upon the coast of Maine. The same neglect of securing the foundations is common to all. This defect is most remarkable among the brick towers, as well as keepers houses, erected upon the sands of Cape Cod and other locations. The contractors have simply smoothed off the surface of the sand to a level and laid their brick-work thereon, without footings, platforms, or any preparation whatever. At Ipswich there are two brick towers, their bases being eight courses below the surface. On scraping away the sand, the base course of brick could be removed by hand, and the mortar had apparently never set. At Billingsgate island, the keeper stated, that, a few months after his dwelling-house was erected, (of brick laid on the sand, tower of wood on the roof,) the front wall fell entirely down, leaving the interior exposed to view. All the brick light-houses and keepers dwellings that were visited were of a similar character. The contractors, to save material, filled the interior of the walls with rubbish of various kinds.

1850  Ipswich light-house.  8 lamps; John J. Philbrook, keeper; supplied August 13, 1850.
There are two light-houses here. The western tower had revolving lamps; the clock runs well. Lanterns want reglazing; lantern decks are leaky about the joints of the soapstone, of which the decks are built. Reflectors, lamps, and oil-butts are good. The shingles upon the roof of the dwelling need renailing. Eight lamps have been burning the year past, and there are now burning seven. This present keeper has taken charge of this establishment within the past year.
Left August 4, 1849 584 gallons. Found on hand 160 gallons. 424 gallons consumed in 374 days is equal to 413 gallons per year, or 51 5/8 gallons per lamp.
Delivered 100 gallons spring oil, 100 gallons winter oil, on hand 160 gallons, for a total of 360.
50 tube glasses; 30 yards cloth; 4 gross wicks; 2 buff skins; 2 pair scissors; 1 hand-lantern; 1 Japan lamp; 1 half-round file; 1 box soap;
Several spare lamps in order; common burners; 14-inch reflectors.

1867  At Ipswich, in June, the range light was moved 550 feet, to a point on the range of the main light and a new channel formed by the shifting of the bar. In November last, the plunk platform and walks to towers were repaired, gutters put on barn with leader to the cistern, zinc lining for base of bug-light lantern, and doors and windows repaired.

1869  Ipswich and beacon.The kitchen chimney has been topped out and arched with brick laid in cement mortar, in place of the iron ventilator which was blown off. Four door latches, two cupboard catches, and six panes 8" x 10" glass have been supplied. Early in the year slight repairs of the plank walk from dwelling to tower were made, and new posts and sills for beacon supplied. Recently the entire walk, 989 feet in length, has been renewed. The beacon has been remodeled and moved 130 feet to the range of the main light with the buoys, in the channel across the bar. The illuminating apparatus has been overhauled, and the revolving machinery cleaned and oiled. At present the station is in good repair and order; but the dwelling is damp, being of brick, and standing upon low land, At the edge of a marsh. The difficulty seems to be due to the location of the station, and unavoidable.

1877  Ipswich, entrance to Ipswich River, Massachusetts.The main tower is old, and in bad order. A new tower is needed, and an appropriation of $6,000 is asked for this purpose. In November a lamp burning mineral-oil was substituted for the argand fountain-lamp in the front light with the same good results as at Newburyport.

1878  Ipswich, entrance to Ipswich River, Massachusetts.The roofs of the dwelling and porch, which were in bad condition, were repaired. The light-house tower is very badly cracked, and will not hold out another year. The house also requires extensive repairs. The beacon light is on land which does not belong to the United States. For the purpose of rebuilding tower, repairing dwelling, and purchasing site for beacon, an appropriation of $10,000 is recommended.

1880  Ipswich, entrance to Ipswich Harbor, Massachusetts.The dwelling has been rebuilt, and the materials for a new tower for the main light are on the site and will soon be erected.

1881  Ipswich, entrance to Ipswich Harbor, Massachusetts.The iron tower for the main light of this station was erected and completed during the year, which completes the work of renovation provided for by the appropriation of Congress.

1883  Ipswich, on south side of entrance to Ipswich Harbor, Massachusetts.The frame underpinning of the range-light house was renewed.

1885  Ipswich, south side of entrance to Ipswich Harbor, Massachusetts.The range-beacon was moved 97 feet to the southward, 250 feet of the plank walk were rebuilt, and other minor repairs were made.

1887  Ipswich, Castle Neck, entrance to Ipswich Harbor, Massachusetts. The basin formed around the dwelling by the blowing away of sand was filled, and a sand hill, which threatened the obstruction of the range-light, was cut down. A new concrete floor was laid in the cellar and other minor repairs were made.

1889  Ipswich, entrance to the harbor, Massachusetts.The barn was rebuilt, the beacon-house repaired, and 80 feet of sand-catching fences erected.

1895  Ipswich, mouth of Ipswich River, Massachusetts.The walks between the dwelling, tower, and beacon house were rebuilt. Various repairs were made.

1899  Ipswich, south side of entrance to Ipswich Harbor, Massachusetts. The front range light, which was discontinued August 2, 1898, was reestablished on a new line February 2, 1899, and a new front beacon was built. Various repairs were made.

1900  Ipswich, south side of entrance to Ipswich Harbor, Massachusetts.The front beacon was moved to a new site to adapt the range to a change in the channel. The front beacon house was rebuilt, 375 running feet of plank walk was laid, and minor repairs were made to the dwelling.

1903  Ipswich range, south side of entrance to Ipswich Harbor Massachusetts.A new revolving machine was installed. Various repairs were made.

1905  Ipswich range, south side of entrance to Ipswich Harbor, Massachusetts.The front range tower was moved to mark the new location of the channel. Various repairs were made.

1932  Front range light was discontinued and rear light was automated.

1939  The metal tower at Ipswich, around which sand had often built up, was barged to Edgartown on Marthas Vineyard to replace a lighthouse damaged in the 1938 hurricane. A skeletal tower was erected to display a light at Ipswich.

For a larger map of Ipswich Range Lighthouse, click the lighthouse in the above map.

A light exhibited from a modern tower is located at the site of the former rear range light.