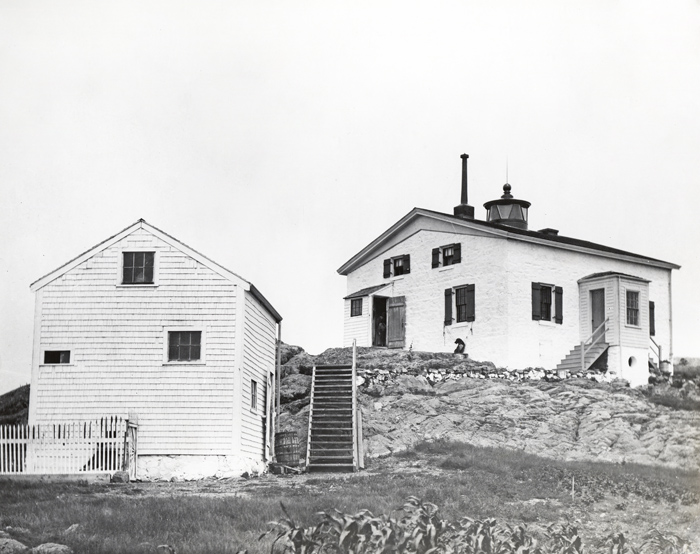 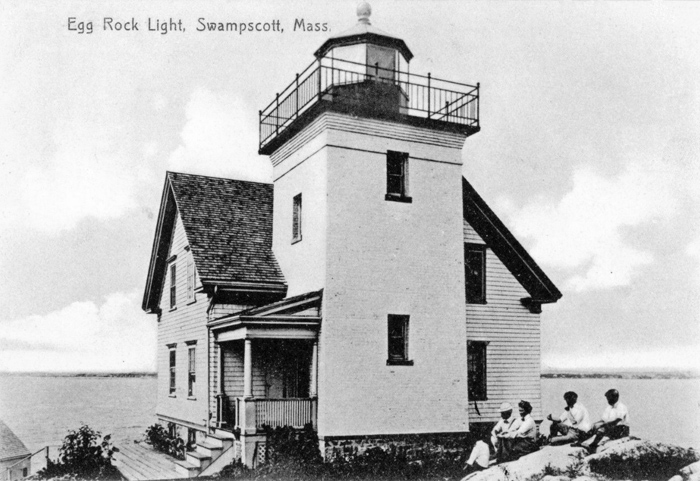 1855  Light-house on Egg Rock island, near Nahant.The difficulty in obtaining a satisfactory title to the island has deferred the contracting.

1856  The light-house at Brants Point, Nantucket, at Egg Rock, and at the Narrows, and the Point Alderton Bar beacon, Boston bay, have been completed.

1857  Boat-ways, boat house, and storm house, have been built at Egg Rock light-house.

1869  Egg Rock.During the storm of September 8th, some slight damages were done to boat-slip steps and porch of dwelling. These are in course of repair. It is reported that in one direction the light is obscured by a chimney, but the inconvenience arising from this is so slight as not to warrant, at present, the expense of raising the lantern. A new cookstove has been supplied, and burners of lamp repaired.

1880  Egg Rock, off Nahant, Massachusetts.The dwelling was painted and repaired.

1882  Egg Rock, off Nahant, Massachusetts.The walls of the dwelling were repointed, the window sash and frames were repaired, the brick cistern replastered inside, the water conductors were partially renewed, and a house-pump and pipe furnished. The boat-slip was repaired, and the plank walks, the platform, and the steps were renewed.

1889  Lightning conductors were provided and attached to the towers at the following stations.

1889  Egg Rock, off Nahant, Massachusetts.The lantern surmounting the dwelling was raised, and a wooden parapet with deck and railing was built under it. The boat slip and steps at the landing were rebuilt.

1895  Egg Rock, off Nahant, Massachusetts.A landing derrick was set up, and repairs were made to the barn and stairs.

1897  Egg Rock, off Nahant, Massachusetts.A contract was made on June 25, 1897, for rebuilding the dwelling and tower on the same foundations. Minor repairs were made.

1898  Egg Rock, off Nahant, seacoast of Massachusetts.The tower, dwelling, and barn were rebuilt.

1900  Egg Rock, off Nahant, Mass.The boat slip and stairs at the landing, with platform, were rebuilt, and 45 running feet of boat slip was built for another landing in southeast storms. About 80 running feet of plank walks were laid. Various repairs were made.

1903  Egg Rock, off Nahant, Massachusetts.A new cistern was built and the old cistern was repaired.

1919  On January 21, 1919, Egg Rock Light was changed from an oil-wick light to an acetylene light with a characteristic of a white flash every three seconds of 550 candlepower.

1922  The Washington Times, March 6, 1922: Egg Rock Lighthouse, for sixty-six years one of the landmarks of the North Shore, has been ordered removed by the Federal Lighthouse Bureau. The beacon is situated almost directly opposite the Nahant home of United States Senator Henry Cabot Lodge. So far as is known, the Senator has made no move to have the light retained. Egg Rock light outlived its usefulness, according to the opinion of the bureau heads, the numerous powerful lights now doing duty outside Boston harbor furnishing all the protection that Egg Rock requires. The light is considered one of the best known and most picturesque on the famous North Shore. It is visible from the shores of Nahant, Lynn, Swampscott and Salem.

1922  The Boston Globe, October 11, 1922: A two-story, seven-roomed building, which was being moved from Egg Rock, got out of the control of the workmen engaged in the task of moving it and slid down the hill, partly into the sea, today. The house was practically smashed to pieces and is now lying half on the land and half in the ocean. Lately the Government decided to abandon the light altogether and three months ago the keepers house was sold to a Dorchester man (John J. Cavanaugh). It was stated that the owner must take the house away from the rock.

For a larger map of Egg Rock Lighthouse, click the lighthouse in the above map.