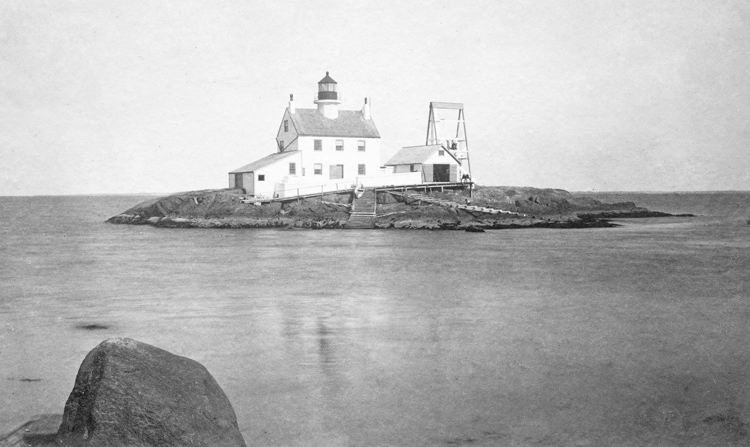 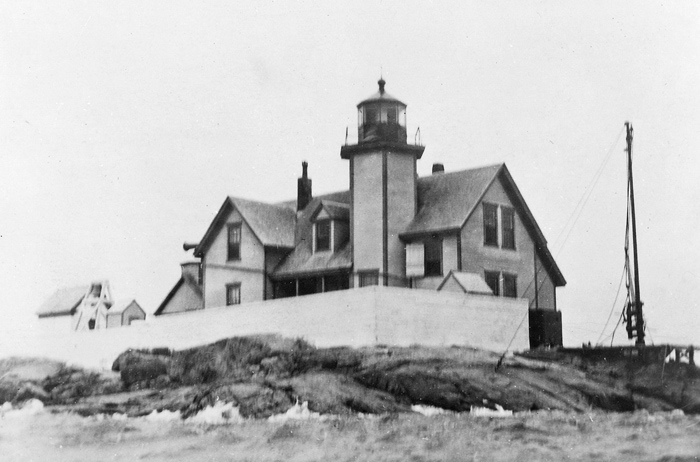 1838  Dumpling-rock light.Nine miles within Cutterhunk light, on the opposite side of Buzzard's bay, stands Dumpling-rock light. This light is insulated a few hundred yards from the main land, and is on the keepers dwelling, forty-three feet above the level of the sea. It is a useful light in guiding vessels into Dartmouth harbor, and in enabling them to avoid the dangers of this immediate navigation; but, like most of the lights in this district, it is much larger than is necessary. There are the same number of lamps in it, with fourteen-inch reflectors, that are in the exterior light of Cutterhunk; one of the lamps is reflecting the light to no useful purpose towards the shore. I recommend, strenuously, the suppression of the upper lamps, and a compact arrangement of the remaining six. They are now seven inches apart.
I visited this light in the afternoon, and found the keeper absent on the main, without having paid the least attention to the lamps since he extinguished them in the morning. The reflectors appeared not to have been burnished for some time, and the lantern was covered with smoke. This keeper and his family were in danger of being drowned out, until Government built a wall round the dwelling; since which, they have lived in safety. Located as this light is, on a small barren rock, with fewer advantages to the keeper than, perhaps, any other light in the district, it would seem proper that I should notice the fact of his salary being smaller by $50 than that of many others.

1838  Dumpling-rock light to be reduced from 10 to 6 lamps, and they to be arranged to suit the navigation. One of the lamps now faces the shore. Dumpling Rock
Fixed light of ten lamps; established 1829.
Condition of buildings.
Two-story dwelling-house of rubble masonry, laid up in bad lime mortar, with an octagonal iron lantern erected upon the ridge of roof; roof slated; base of house rests on the surface of a dry ledge, and is surrounded with a wall of rubble masonry six feet high, to break off the shocks of the sea. This wall was erected subsequent to the establishment of the lighthouse, and to save the keeper and family from being drowned out. The walls of the house are cracked on the southwest corner, and the windows are leaky; otherwise in good repairs. The rain-water cistern is leaky, and in storms gets filled with salt instead of fresh water, from the surf flying over the roof of the house.
The lantern is of the usual form, and had been shaken nearly to pieces by storms. It contains ten lamps, with 14-inch reflectors, arranged in two circular series, as usual. One lamp has faced the roof of the lantern for fourteen years, and two others shine over the land. The same carelessness in arranging the apparatus is observable here as elsewhere.
The centre of the light is forty-three feet above the level of mean high water, and its reach should be 9.81 miles in clear weather.
Location: Dumpling rock lies on the west side of Buzzards bay, among a group of dry ledges, six miles S.S. W. of Clarks Point light. Its surface is very small, leaving but little room for the keeper to move about outside the wall which protects his house. The vicinity is crowded with dangerous reefs and shoals. The ship channel passes within pistol-shot of the light-house.
Statement of Levi Smith, keeper of Dumpling Rock fixed light, Buzzards bay, October 7, 1842.
I was appointed keeper of this light in 1828, upon a salary of $400. The light-house is a two-story stone tenement, with the lanterns fixed upon the roof. The walls of the house are cracked upon the northeast corner, owing, I think, to the late season of the year in which they were completed. I have pointed these cracks with cement. The lantern on the roof of the house contains ten lamps, one of which has always faced the copper door of the lantern, and does no good to any body. The lantern is a very bad one; it shakes very much in blowing weather; leaks profusely; and sweats so as to obscure the light in winter, by the accumulation of frost upon the glass. The reflectors are all worn out, and the silver burnt off; the rain-water cistern is built or brick, and has been much injured by the freezing of the water in winter; the windows on the east side of the house leak badly in rainy weather; the sea breaks all over the rock here in easterly gales, and, falling upon the roof of the house, gets into the cistern, and spoils the water. I am allowed a boat. My oil has been good.
Levi Smith, Keeper

1880  Dumpling Rock (Round Hill), Buzzard's Bay, Massachusetts. The keepers dwelling was repaired and painted, and the fog-bell machinery overhauled.

1888  Dumpling Rock, entrance to New Bedford Harbor, Buzzard's Bay, Massachusetts.The old and worn-out striking-machine of the fog-bell was replaced by one in good order. The keepers dwelling is in a dilapidated condition. It was built of stone in 1828, and is in such bad condition that it would be a waste of money to give it further repair. If this dwelling is to be kept habitable it will be necessary to expend in its repair a sum that would amount to a considerable part of the cost of a-new house. It would be in the interests of true economy, for the comfort of the keepers, and for the efficiency of the public service that a new dwelling should be built at this station at the earliest day practicable. It is estimated that such a building will cost $3,750.

1889  Dumpling Rock, off Round Hill, Massachusetts.Measures are in progress for rebuilding the dwelling and tower surmounting it. Some repairs were made at the light-house.

1890  Dumpling Rock, Buzzard's Bay, Massachusetts.The old stone dwelling, built in 1828, was torn down and replaced upon the same foundation by a framed dwelling 34 by 26 feet in plan, surmounted by a wooden tower with a modern fourth-order lantern. For its protection against the sea a bulkhead 90 feet long was built of hard pine timber, heavily bolted to the rock and re-enforced by dry masonry from the stones of the old dwelling.

1897  Dumpling Rock, off Round Hill, New Bedford Harbor, Massachusetts.  Preparations were made for establishing a Daboll trumpet, operated by an oil steam engine. NOTE.This signal was established on October 12, 1897.

1898  Dumpling Rock, off New Bedford Harbor, Massachusetts.The boat slip was rebuilt. A telephone line was built by contract, from the shore opposite the station to Nonquitt, Mass., under the appropriation for national defense.

1899  Dumpling Rock, off New Bedford Harbor, Massachusetts.A cable was laid to connect the station with the telephone line on the mainland. An addition was built to the boathouse and minor repairs were made to the boat slip. Various repairs were made.

1900  Dumpling Rock, Massachusetts.This Daboll trumpet was in operation some 707 hours, and consumed about 1,099 gallons of mineral oil.

1901  Dumpling Rock, Massachusetts.This Daboll trumpet was in operation some 657 hours, and consumed about 889 gallons of mineral oil.

1902  Dumpling Rock, Massachusetts.This second-class Daboll trumpet was in operation some 753 hours, and consumed about 575 gallons of mineral oil.

1903  Dumpling Rock, Massachusetts.This first-class Daboll trumpet was in operation some 902 hours, and consumed about 625 gallons of mineral oil.

1904  Dumpling Rock, Massachusetts.This first-class Daboll trumpet was in operation some 746 hours, and about 653 gallons of mineral oil was used by the engine. This fog-signal plant consists of 4-horsepower oil engines, air compressors, and air tanks, all in duplicate, and a first-class Daboll trumpet They use 5 pounds pressure and 2.63 cubic feet of free air a second of blast.

1905  Dumpling Rock, off New Bedford Harbor, Massachusetts.A short breakwater was built to protect the landings. Repairs were made.

1905  Dumpling Rock, Massachusetts.This first-class Daboll trumpet was in operation about 781 hours, and some 832 gallons of mineral oil were used by the engine.

1906  Dumpling Rock, Massachusetts.This first-class Daboll trumpet was in operation some 713 hours, and some 639 gallons of mineral oil were used.

1907  Dumpling Rock, Massachusetts.This first-class Daboll trumpet was in operation some 786 hours, and about 837 gallons of mineral oil were used by the engine.

1921  J. E. Rogers, keeper, Dumpling Rock Light Station, Mass., assisted in pulling off the rocks, on the southwest side of the light, the disabled power boat Kyra with five men on board and in anchoring it in safe water. Happened on July 31, 1921.

1938  The New England Hurricane of 1938 seriously damaged the lighthouse.

1942  The lighthouse was demolished and a skeletal tower erected to display an automatic light.

For a larger map of Dumpling Rock Lighthouse, click the lighthouse in the above map.