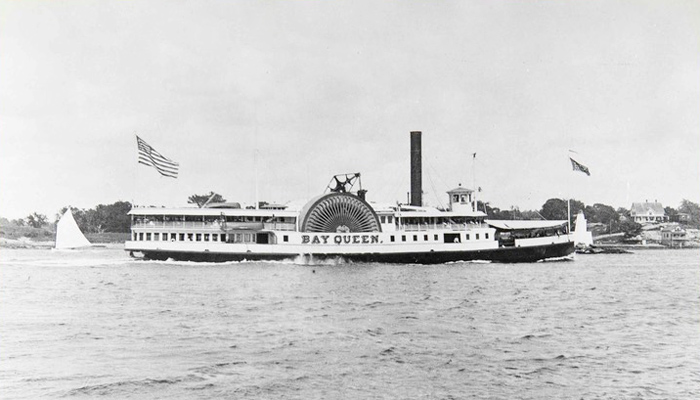 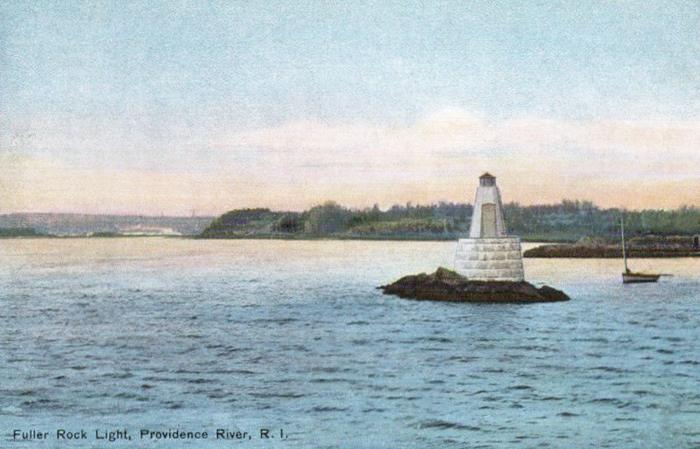 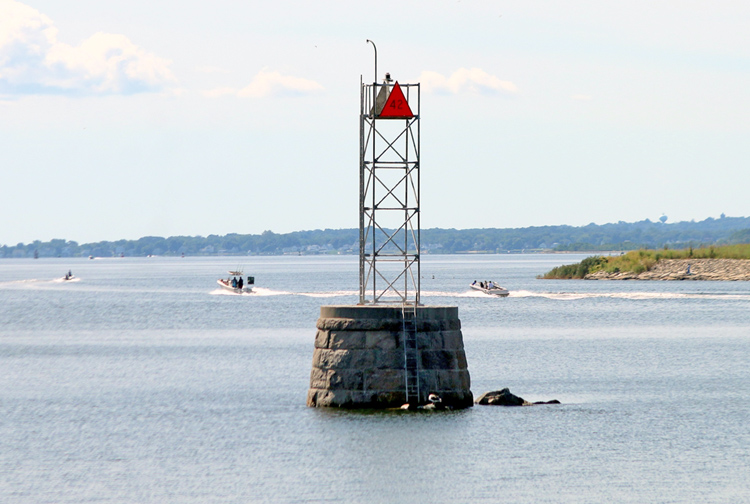 1870  Fullers Rock, Rhode Island, Providence River.Congress made an appropriation July 15,1870, for a beacon-light to mark this rock. Work will be commenced as soon as valid title and cession of jurisdiction are obtained.

1871  Pumham Rock, Fuller's Rock. Sassafras Point. The construction of these three permanent Lights in Providence River, above Sabine's Point, Rhode Island, authorized by an appropriation made July 15, 1870, is progressing under contracts, and will be completed this season.

1872  Fuller's Rock, River Providence, Rhode Island.During the construction of this beacon it was lighted by a steamboat company for the benefit of the navigation of the channel to Providence. The failure of the contractor to comply with the terms of this contract has made it necessary to reject the work.

1873  Fuller's Rock, river Providence, Rhode Island, Sassafras Point, river Providence, Rhode Island.These beaconlights are on opposite sides of the river and are distant about one mile.
The purchase of a site and the erection of a dwelling, for the keeper are recommended, as very great difficulty is experienced in securing a suitable person to attend the lights at the compensation fixed for such beacons. It is supposed that $5,000 would be adequate for the object, and it is therefore recommended. The light at Sassafras Point was changed from white to red October 1, 1872.

1875  Fuller's Rock, and Sassafras Point, Providence River, Rhode Island.The purchase of a site for the erection of a dwelling for the keeper of these lights has not been made. The land in the vicinity is being much improved, for business purposes, and there is a disinclination on the part of the owners to sell land for a keeper's dwelling, as they fear that the remainder will be depreciated in value. The appropriation of $5,000, made by act approved June 23, 1874, is still available.

1876  Fullers Rock, Sassafras Point, Providence River, Rhode IslandNothing has been done at these stations toward erecting a dwelling-house for the use of the keeper, as it has been impracticable to effect the purchase of a site.

1879  Fullers Rock, Sassafras Point, Providence River, Rhode IslandThe wooden towers of these two stations (frame portable beacons) are showing considerable evidence of decay, and it is recommended that an appropriation of $1,000 be asked for substituting for them cast-iron towers.

1881  Fuller's Rock, 144, Sassafras Point, in Providence River, Rhode Island.The beacons surmounting the stone piers need renovation, and the work should not be delayed.

1889  Fullers Rock, Providence River, Rhode Island.The masonry of the pier was pointed and the holes under it were filled with concrete in bags. Some 75 tons of riprap were placed around the base, and various minor repairs were made.

1900  Fuller Rock, Rhode IslandThe color of the lens light was changed from red to white.

1913  Fuller Rock Lighthouse as converted to an acetylene light and automated.

1923  The Boston Globe, February 5, Fuller Rock Light Burns as Result of Blast  Five members of the crew of the United States lighthouse tender Pansy were hurled through the air and injured and burned, and Fuller Rock light, off Vanity Fair, was destroyed by fire this afternoon when a batter of acetylene tanks, which had just been placed in position on the light, exploded. The injured men, all of whom are from Newport and none of whom is critically hurt, are: George Samuelson, 45, face and neck burned, Clarence Gustafson, 20, right leg broken, Manuel Rudda, 30, head cut and bruised, Lloyd Wyatt, 18, right leg broken and body burned, Joe Maccadea, 24, face burned.
The injured men were taken aboard the Pansy after the explosion and rushed to the State Pier, where ambulance transferred them to the Providence Surgical Hospital. The Pansy will remain at Providence awaiting Federal lighthouse inspectors, who will conduct an inquiry.
Fuller Rock light was a small wooden structure containing an automatically controlled beacon, which flashed from sunset to sunrise. Acetylene was used for the light, and the tanks have to be replaced about every six months.
It was to perform this task that the Pansy arrived at the light shortly before noon. The old tanks were removed from the light and six new ones installed. Each tank is of steel, about six feet long and 10 inches in diameter and weighs about 300 pounds. The acetylene is the type known as 10 atmosphere pressure.
Installation of the tanks was completed and the men returned to the Pansy for lunch. After lunch, to make certain that everything was as it should be, the five men went back to the light for a final inspection. The explosion followed.

For a larger map of Fuller Rock Lighthouse, click the lighthouse in the above map.

A modern light is shown from the old stone foundation on Fuller Rock.