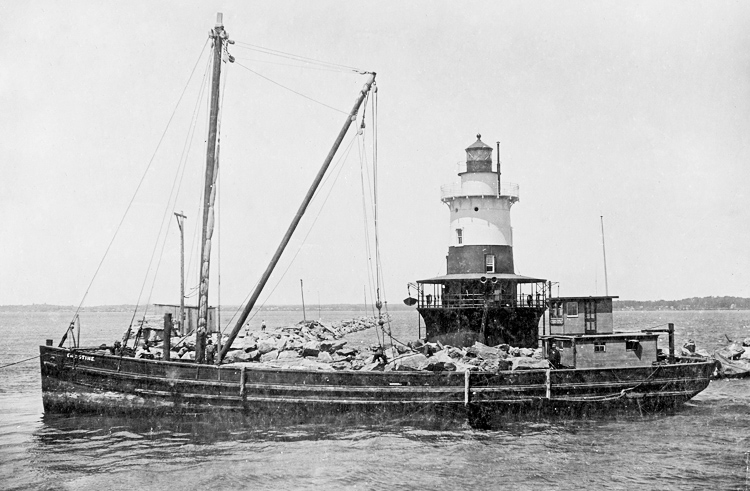 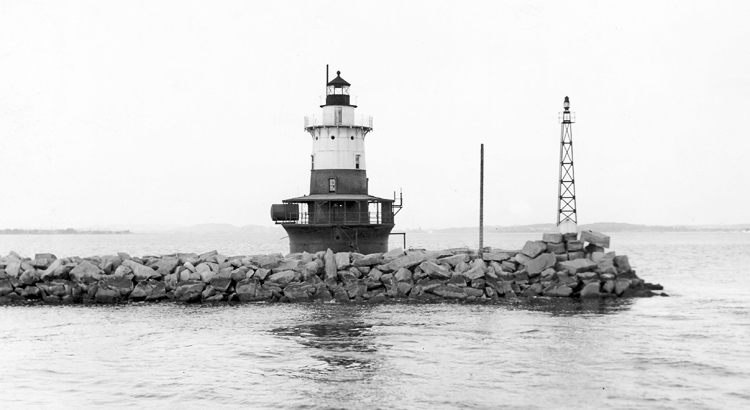 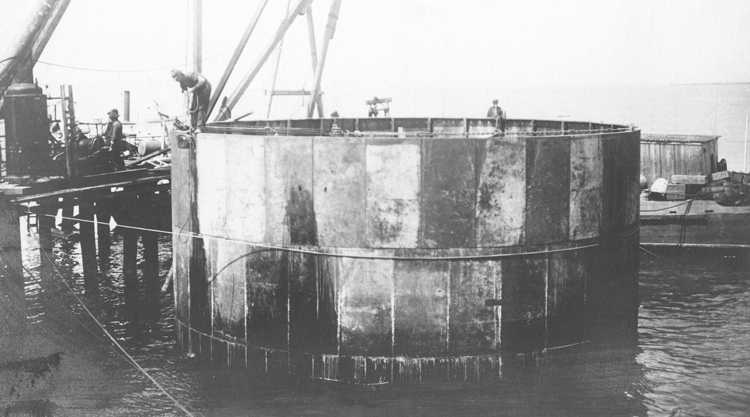 1896  New Haven Harbor Breakwater, Connecticut.The Government works of improvement to this harbor are now nearly completed, and it is necessary to place a light on the outer breakwater, not only to guide into the harbor, but to prevent vessels from collision with the breakwater itself. It is estimated that this light and fog signal can be established for a sum not exceeding $45,000, and it is recommended that an appropriation of this amount be made therefor.

1897  New Haven Harbor Breakwater, Connecticut.By the act approved June 4,1897, an appropriation of $25,000 was made for a light and fog-signal station on the outer breakwater, entrance to New Haven Harbor, to mark the westerly entrance to the harbor, and authority was given by the same act to contract for a station in a sum not to exceed $75,000.
Recommendation is therefore made that an appropriation of $50,000 be made for the completion of this work.

1898 -285. New Haven Outer Breakwater, Connecticut.By the acts approved June 4,1897, and July 1, 1898, appropriations of $25,000 and $50,000 were made for establishing a light and fog signal on the outer breakwater entrance to New Haven Harbor, Connecticut. The plans and specifications for the metal work and erection have been made and the work is in hand.

1899  New Haven Outer Breakwater, Long Island Sound, Connecticut. Appropriations were made for building this lighthouse of $25,000 by act approved June 4,1897, and of $50,000 by act approved July 1,1898. On September 1, 1898, contract was made for the metal work. Contract was made November 9, 1898, for the erection of the structure. On April 29,1899, the caisson was completed and launched. On June 3 the placing of the concrete was begun. On June 11 the caisson was sunk into position, and on June 30 it was properly placed. On June 30 the foundation cylinder, except the upper or bell course, was placed in proper position and filled with concrete to the top of the fourth course of plates. Proposals were invited for furnishing and placing 2,000 tons of riprap for a protection to the site.

1900  New Haven outer breakwater, Connecticut.The erection of this station by contract was completed. A fourth-order flashing red light and a second-class siren fog-signal were established, operated by a 13-horsepower oil engine and compressed air. Contract was made to furnish and place from 20,000 to 23,000 tons of riprap for the protection of the station, and about 13,781 tons were delivered.

1901  New Haven Outer Breakwater, Connecticut.Some 2,023 tons of riprap were placed for the protection of the station. The fourth course of foundation cylinder plates omitted from this station was removed on December 12,1900, for use as the first course of the foundation cylinder for Hog Island Shoal Light-House Station, in accordance with the modified contract for that work. Various repairs were made.

1901  New Haven Outer Breakwater, Connecticut.This second-class automatic siren, in duplicate, worked by 13-horsepower oil engines, was in operation about 236 hours and consumed some 406 gallons of oil.

1902  New Haven Outer Breakwater, Connecticut.A second-class siren replaced the disabled one, which was returned to the general light-house depot. Various repairs were made.

1902  New Haven Outer Breakwater. Connecticut.This second-class automatic siren, in duplicate, worked by 13-horsepower oil engines, was in operation about 269 hours and consumed some 421 gallons of oil.

1906  New Haven Outer Breakwater, Connecticut.This comprest air siren, in duplicate, worked by 2-horsepower oil engines, was in operation about 387 hours, and consumed some 221 gallons of oil.

1906  May 27, Captain S.A. Armour, keeper of the Sperry lighthouse at the breakwater, reports the capture of a lobster weighing thirteen and on-half pounds. It was with difficulty that the crustacean cold be got out of the lobster pot. One of the lobsters claws weighed three and three-quarters pounds.

1907  this is a case in which Samuel A. Armour, keeper of the Sperry Lighthouse off the port of New haven, Conn., in the discharge of his duties on January 8, 1907, in a small boat had carried ashore one Walter Gill, who had been at the station repairing the fog signal engines; the said Samuel A. Armour in attempting to return to his post through a howling wind and raging sea was drowned and his body was not recovered until several weeks after. According to the evident submitted Captain Armour realized the trip back to his post would be a perilous one, but did not regard his own safety as his duty required him to be back in charge of the lights which were especially needed in such a storm. He lost his life in public service, but all through the long dark night Mrs. Rose B. Armour, his wife, kept the lights burning just as her husband had always done. She was alone in the lighthouse and did her duty.

1907  New Haven Outer Breakwater, Connecticut.This compressed-air siren, in duplicate, worked by 2-horsepower oil engines, was in operation about 525 hours, and consumed some 222 gallons of oil.

1919  On November 1, William L. Tutty, keeper, and Dominick Desiena, assistant keeper, New Haven Light Station, Conn., rescued 6 men from a motor boat which was wrecked on the breakwater, and rendered assistance to the captain and owner of the yacht Sunbeam, which also drifted onto the breakwater.

1921  The Department has commended Dominick Di Siena, keeper of New Haven Light Station, Conn,; Walter J. Ross, first assistant keeper, and George W. Denton, second assistant keeper for their efforts in rescuing on June 22 three occupants of a small boat which had swamped during a squall.

1933  With its foundation compromised, New Haven Outer Breakwater Lighthouse, also known as Sperry Lighthouse, was dismantled in 1933. Hartford Courant, July 12, 1933, The Sperry Lighthouse, for 33 years a guide to navigation in New Haven harbor, has been discontinued, as a part of the governments economy program.
Perhaps the most difficult job tackled by the Abrams firm was the old Sperry lighthouse situated on an islet three miles off New Haven, Conn. The beacon had been abandoned by the government and Mr. Abrams purchased it for a nominal sum. The tower was seven stories high and each floor was built of cast iron plates, bolted together. Dismantling the tower from the top down and transporting the iron from the rocky islet to barges in the choppy sea was a two-month job. The only untoward incident was when workmen accidentally set the place on fire with acetylene torches. 

Formerly located just inside the eastern end of the westerly outer breakwater at the entrance to New Haven Harbor.
Latitude: 41.221267, Longitude: -72.942325

For a larger map of New Haven Outer Breakwater Lighthouse, click the lighthouse in the above map.

The remains of the foundation can still be seen near the breakwater.