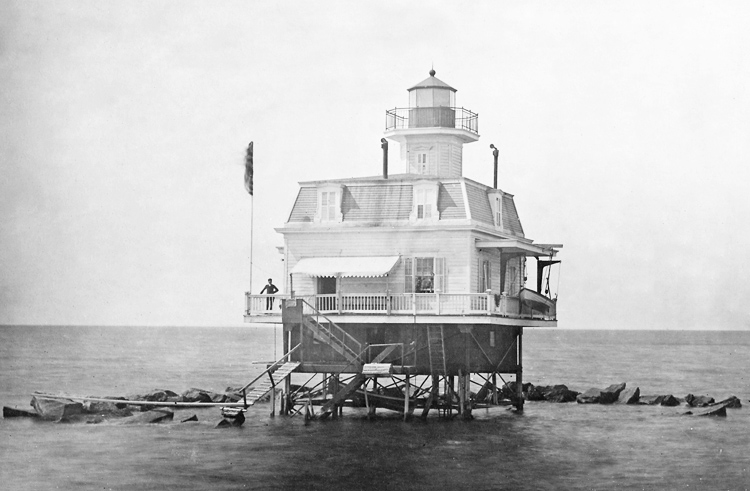 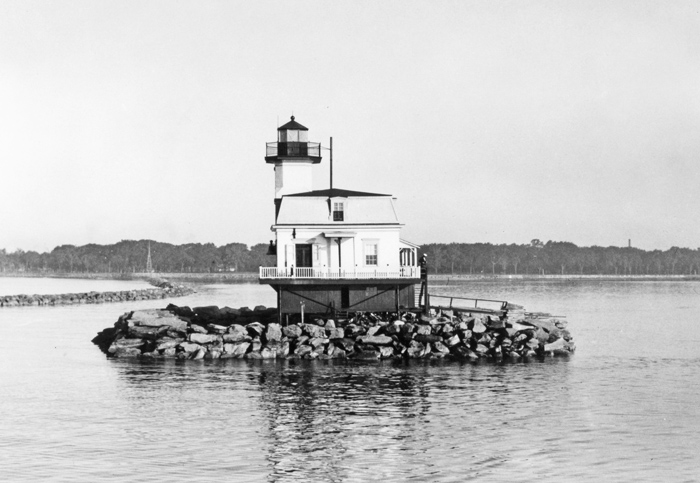 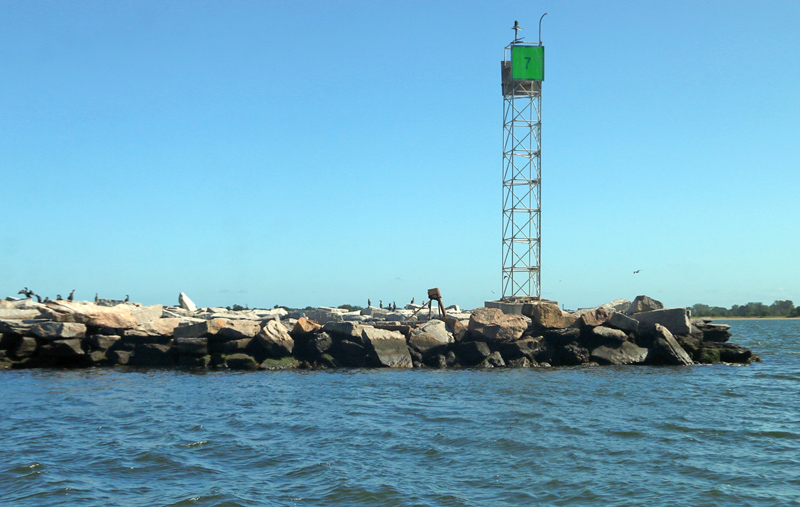 1867  Bridgeport beacon, Conn.Lower part of structure, which had been corroded, repaired; fenders, bolts, &c., renewed. Damage to lantern by vessel running into it, repaired, and the whole beacon repainted.

1868  Bridgeport Beacon.During last winter this iron-pile beacon was badly injured by the ice, and although it has been repaired, it is not regarded as secure, and should the ice be as heavy this winter as last, it will probably be carried away. In view of this, and the frequent and expensive repairs to the structure, its exposed position and importance as a guide to the harbor, and the apparent steady increase of the commerce of Bridgeport, it is recommended that a stone structure, similar to those lately built upon the Hudson river, be substituted for the present beacon, and an estimate of the requisite appropriation therefor is submitted.

1869  Bridgeport Beacon, Connecticut.No repairs have been made at this station. A new boat has been furnished and the boat-ways repaired. The recommendation of last year to replace the present inefficient iron structure by one of stone capable of withstanding the shocks of storm waves and ice, and be at all times reliable, is renewed, and the same estimate will be included in the annual estimates.

1870  Bridgeport Beacon, Connecticut.The reconstruction of this beacon is authorized by the appropriation made July 15, 1870. The work will be commenced at an early day and will be prosecuted so as to insure its completion during the fiscal year.

1871  Bridgeport Harbor, Connecticut.The rebuilding of this beacon was authorized by the appropriation of July 15,1870. The plan adopted is similar to that for Long Beach Bar, viz, a Light on keeper's dwelling, which is founded on screw-piles: these being protected by an icebreaker of granite blocks placed in riprap. The entire iron and woodwork for this structure is completed, and contracts are now in operation for the erection of the Light house, and building the ice-breaker. The Light will probably be exhibited by October next.

1872  Bridgeport Harbor, Connecticut.The iron-pile light-house adopted for this locality has been completed and occupied by the keeper. The light has been exhibited in the new structure since November, 1871. A stone breakwater surrounding the light-house and protecting it from the floating ice-fields has recently been constructed. The light in the old structure has been discontinued.

1873  Bridgeport Harbor, Connecticut.The better protection of the iron screw pile lighthouse against the floating ice is deemed necessary, and a coping of heavy stones to resist the ice is proposed, for which there is required the amount of $5,000, tor which an estimate is submitted.

1874  Bridgeport Harbor, Connecticut.The fog-bell apparatus at this station has been improved by the addition of a new part to the machine of improved pattern.

1875  Bridgeport, entrance to Bridgeport Harbor, Connecticut.The work of coping the granite breakwater, which protects this light-station, by heavy blocks of stone has been completed during the year by contract, made under the appropriation of Congress therefor.

1876  Bridgeport Harbor, Connecticut.During the severe storms of the winter and early spring, many of the large coping-stones surmounting the breakwater which surrounds this station were carried away. These have recently been recovered and secured upon the breakwater, and as an additional protection against their being again removed a considerable quantity of riprap-stone has been delivered at the deepest places along the base of the breakwater, where it serves to break the force of the waves.

1880  Bridgeport Harbor, Long Island Sound, Connecticut.The buildings were painted inside and outside, and some slight repairs were made.

1889  Bridgeport Harbor, Long Island Sound, Connecticut.Some 600 tons of riprap were placed for the protection of the screw-pile foundation, and various repairs were made.

1894  Bridgeport Harbor, Long Island Sound, Connecticut.The breakwater around the light-station was raised and extended 50 feet on the northwest side. A new Gamewell fog-bell apparatus was installed. Various repairs were made.

1898  Bridgeport Harbor, Connecticut.Under authority of the Secretary of the Treasury, dated April 7,1898, a battery of two 10-inch guns was placed on the light-house foundation by the War Department.

1914  Willis A. Green, keeper, cared for man, a survivor of crew of 4, who swam to station from a motor boat of torpedo destroyer McCall, which was run down by steamer Seaboard.

1918  C.R.Riley, keeper, rescued man and wife from disabled and sinking boat, ashore on breakwater, and furnished them food and shelter.

1921  William Hardwick, keeper, Bridgeport Harbor Light Station, Conn., towed a disabled cabin cruiser, having a party of men and women aboard, to the yacht club in Bridgeport.

1921  William Hardwick, keeper, Bridgeport Harbor Light Station, Conn., assisted the launch Clara H, which had gone ashore on the west breakwater, furnished lodging at the station to the occupant of the launch, and towed him ashore.

1922  On June 25, 1922, Daniel F. McCoart, keeper of Bridgeport Harbor Light Station, Conn., rescued the occupants of a motor boat which had struck a submerged foundation, tearing a hole in the bottom. The keeper stated: Aboard at the time were three men and a boy. I heard their cries for help and lowered the boat and went to their assistance, taking off the boy and instructing the men to keep signaling to a motor boat, which later towed them into the lighthouse basin. I furnished them with materials and tools for making necessary emergency repairs.

1922  Daniel F. McCoart, keeper, Bridgeport Harbor Light Station; rescued the occupants of a motor boat, which had struck a submerged foundation tearing a hole in its bottom.

1924  Daniel F. McCoart, keeper of Bridgeport Harbor Light Station, Conn., on July 9 rendered assistance to a man in recovering his motor boat and skiff which went upon the breakwater.

1930  Daniel F. McCoart, keeper, Bridgeport Harbor Light Station, Conn., towed the disabled speed boat Dragon into Bridgeport Harbor on June 15, when that boat had lost its rudder in a rough sea. There were three persons in the boat.

1931  Daniel F. McCoart, keeper, Bridgeport Harbor Light Station, Conn., rescued two boys from drowning on August 10. The boys had ventured out in a small sailboat which overturned when they were at the mouth of the harbor. One boy could not swim and was being held up in the water by the other boy, who was fast losing his strength. The keeper succeeded in getting the boys into his boat and took them ashore, where it was some time before one of the boys could be revived.
Mr. McCoart was commended for a similar rescue in September, 1930, when he saved three members of a fishing party from drowning.

1937  Riprap has been deposited for the protection of the caisson foundation.

1953  Bridgeport Harbor Lighthouse was dismantled in 1953, and a skeletal tower was erected in its place.
Newport Daily News, August 17, 1953: We are glad to see that since the lighthouse at the harbor mouth of Bridgeport, Conn., has to go, the Coast Guard has decided to burn it down. We hope they will put the torch to it some dark night so that the flames will be visible for miles to thousands, and the structure can really go out in a blaze of glory. What to do with outdated lighthouses has become a problem to the Coast Guard, and the torch seems to be the answer  at least it is in this instance. But it will not be applied to the lighthouse, built in 1851, until an automatic light on a steel skeleton tower is ready to take over the service. Bridgeport Harbor Light is another casualty due to the modernization of navigation aids. The old buildings with their crews and in some cases entire families are steadily going by the board, and with them goes an era of colorful history such as we knew here in the days of the Ida Lewis Light in Brenton Cove. From time to time there are outcries against the demolition of some famous lighthouses and that is as it should be. We ought as far as possible to keep them because they represent in many cases heroic deeds and serve as a reminder of the difficulties of sailing the seas in days when so many mechanical contraptions were not available and a sea captain often had to rely on his wits and his instinct.
The Hartford Courant, December 20, 1953: The 102-year-old Bridgeport Harbor lighthouse was destroyed accidentally by fired Saturday as it was being dismantled by workmen. The historic structure was abandoned by the Coast Guard last month as an economy move and was scheduled to be replaced next week with an electric marine beacon. When the Coast Guard announced it would dispose of the light, the Fairfield Dock Company of Bridgeport purchased it and sought to preserve the building for its historic value by asking the Board of Park Commissioners to provide a site for the structure in a Municipal Park. The city rejected the dock firms plea and officials of the company decided to wreck the structure, salvaging what material they could. During demolition work today, scrap wood was being burned by workmen near the lighthouse. Company officials said a shift in the wind caused flames and sparks from the fire to touch off the blaze which leveled the building. The workmen fled from the lighthouse site in a tug.

Formerly located on the western side of the channel at the entrance to Bridgeport Harbor and the Pequonnock River.
Latitude: 41.156736, Longitude: -73.179948

For a larger map of Bridgeport Harbor Lighthouse, click the lighthouse in the above map.

The foundation and riprap for the lighthouse is still visible in the harbor.