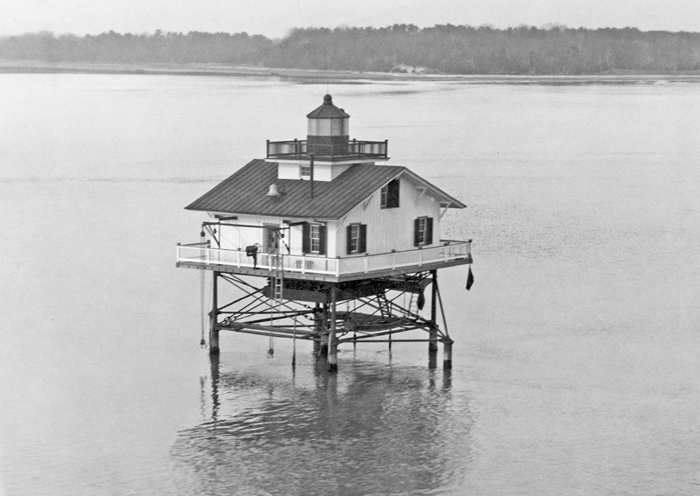 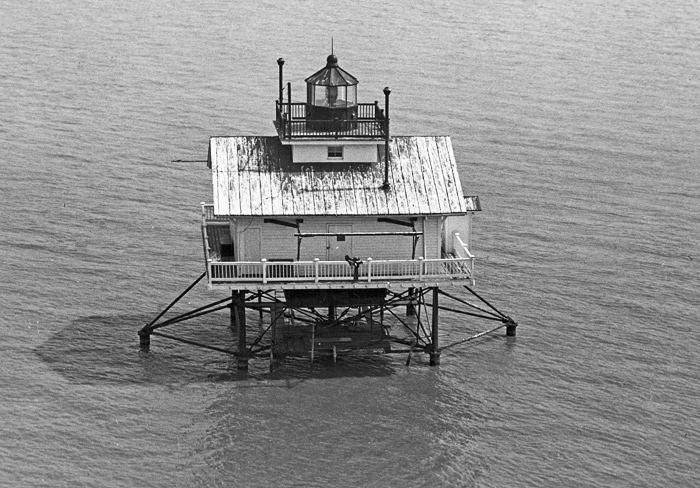 1838  Upper-Cedar-point light-boat.Captain and crew absent. At half past eight P. M., the mate called on board the cutter, from whom I obtained the following information: The boat requires calking, painting, and some other slight repairs; the lantern is hidden by the head of the slides; it cannot be seen three hundred yards when the boat is head on.

1855  Upper Cedar Point, Potomac river.This light-vessel was thoroughly repaired last spring, and was fitted with a new illuminating apparatus, consisting of a lantern containing 16 panes of large sized plate-glass, and a new Costan lamp, in place of the old style lantern of 48 panes of small sized common glass and the old style common bowl-lamp. The Costan lamp was first exhibited on the 17th May, 1855.

1859  The light-vessel removed from the Ocracoke inlet, in North Carolina, under the operation of the 3d section of the act of Congress approved March 3, 1859, is being repaired and refitted for use as a relief vessel for the waters of Pamlico sound, and the vessel removed from the Nine-feet shoal, in the same waters, under the operation of the same act, has been transferred to the Potomac river to take the place of the Upper Cedar Point light-vessel nearly worn out.

1860 - Ninefoot shoal light-vessel has been fitted out, and sent to occupy the station of the Upper Cedar Point light-vessel, on the Potomac river, this latter vessel having been found to require extensive repairs.

1861  Between the 19th and 24th April, 1861, the two light-vessels in the Potomac were wantonly burned, and four in the Chesapeake between the mouth of the Potomac and Hampton Roads were removed and their apparatus carried off or destroyed. Two of these light-vessels were subsequently recaptured, but they had been stripped of everything that could be removed.

1864  Two of the light-vessels which were mentioned in the last annual report as being detained in New Bedford, under the lien law of the State, for debts due by the contractor, have been placed upon the stations on Upper and Lower Cedar Points in the Potomac river, for which they were originally designed. A competent guard for their protection has been detailed from the army.

1867  Upper Cedar PointUpon the completion of the new screw pile light-house intended as a substitute for this vessel, it was lighted for the first time on the night of July 20, 1867, and the vessel taken to Norfolk, put on the ways, her sheathing thoroughly repaired, and painted red. On the 17th August she was taken in tow by the tender Heliotrope and placed upon the Willoughby Spit station, the iron vessel formerly occupying it being no longer fit for service. The vessel now marking Willoughby Spit is in excellent condition in every particular.

1877  Upper Cedar Point, Potomac River, Maryland.On the establishment of the light at Mathias Point Shoal, this light was discontinued. The structure remains as a fog-signal station and day-beacon.

1883  Upper Cedar Point, above the mouth of Port Tobacco River, Maryland.The light at this station, which had been discontinued since December, 1870, was relighted on September 1, 1882. The station is in excellent order.

1884  Upper Cedar Point, Potomac River, Maryland,Boat-hoisting apparatus was placed in position in October and an additional smoke-stack put up.

1888  Upper Cedar Point, Potomac River, Maryland.Two red sectors were inserted, one of about 22 ½ degrees to cover the shoals on the Virginia side between Dade's Shoal and Maryland Point, and the other of about 31 degrees, the southern edge to mark the northern edge of the channel above Mathias Point, April 15,1888.

1897  Upper Cedar Point, Potomac River, Maryland.On October 10 the red sector in the light showing between the bearings NE. 3/8 N. and NE. by E. 5/8 E. was discontinued. Various repairs were made

1930  T. J. Steinhise, keepers, Upper Cedar Point Light Station, Va., rescued the owner and his family when the motor boat Verdoma went aground on a bar near the light station on April 12.

1963  Upper Cedar Point Lighthouse was dismantled in 1963 and replaced with a light atop a skeletal tower mounted on the screwpile foundation.

Formerly located on the end of the shoal off Upper Cedar Point, above the mout of Port Tobacco River, on the northerly side of Potomac River.
Latitude: 38.402741, Longitude: -77.083086

For a larger map of Upper Cedar Point Lighthouse, click the lighthouse in the above map.

A modern light, known as Channel Light 8, marks this part of the river in 2018, and the remains of the foundation of Upper Cedar Point Lighthouse appeared barely visible in satellite imagery.