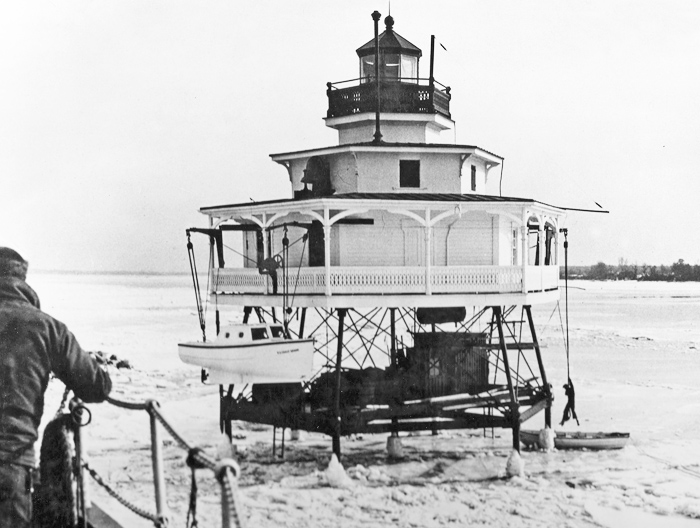 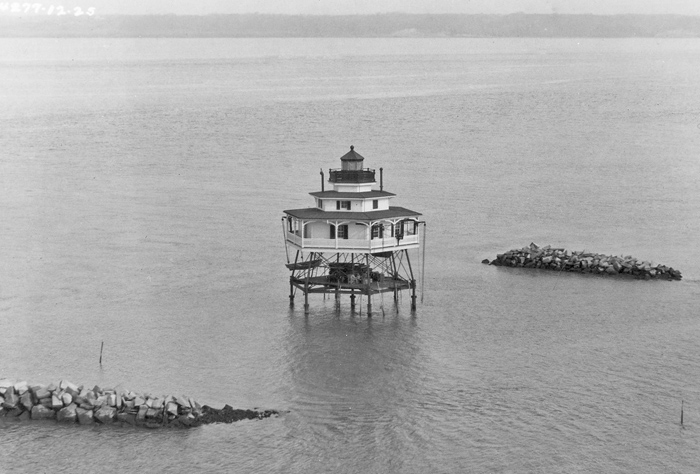 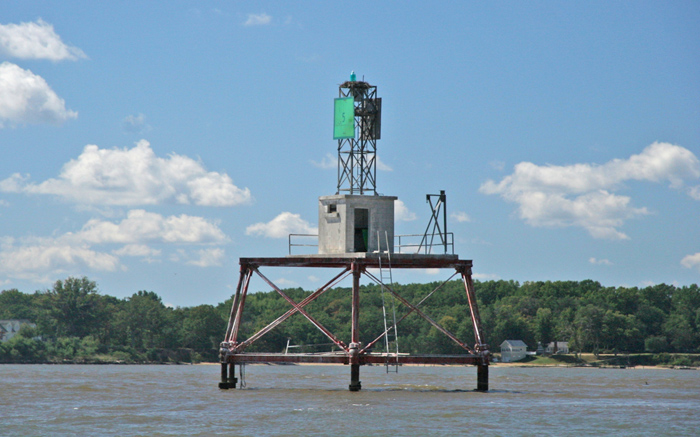 1872  Shipping Point, River Potomac, Virginia Plans and specifications are being prepared for the small light, for which an appropriation was made, to mark the entrance to the anchorage of Shipping Point, river Potomac, Virginia. Some delay will doubtless be experienced, however, owing to the fact that an act of the State legislature will be required, ceding jurisdiction over this site before any work can be done. Steps will be taken at an early day to secure the necessary legislation in the case.

1873  Shipping Point, Potomac River, Virginia.An appropriation of $9,000 was made by act approved June 10, 1872, for a lighthouse to mark the entrance to the anchorage in Quantico Creek, Virginia, drawings and specifications for which have been prepared. A general act was also passed by the State of Virginia, ceding jurisdiction over sites purchased or to be purchased by the United States for lighthouse purposes. The act approved March 3, 1873, authorized the Light-House Board to place the lighthouse provided for by the previous act anywhere in the near vicinity of Shipping Point that might be deemed proper. An examination of the river was accordingly made by the engineer and inspector of the district, both of whom agree that a light at Shipping Point would be of little, if any, use to navigation. Neither is there any place in the near vicinity of Shipping Point at which a lighthouse would be of use. The place most in need of a light-house in the Potomac River is at or near Matthias Point. It is suggested that the appropriation for Shipping Point be allowed to revert to the Treasury, and, in lieu thereof, that an appropriation of $20,000 be made for a light at the latter place. The wording of the act leaving it discretionary with the Light-house Board to locate the light-house at such place in the near vicinity of Shipping Point as they deem proper, conveys some latitude in regard to the location of the lighthouse, but it was not supposed that the act contemplated the possibility of its location 24 miles distant, which is the distance of Shipping Point from Matthias Point.

1873  Port Tobacco Flats, in the bend of Potomac River opposite Matthias Point.This is one of the most difficult places for experienced navigators, who are familiar with the river, to pass at night. Few places occur where experienced pilots cannot tell where they are by soundings; at this place, however, soundings run from 100 feet to 5 feet within a space of a hundred yards. The current, which is strong, sets directly on the flats, both at the flood and ebb tides, which renders it bad enough for sailing-vessels even by daylight, but at night the difficulty is much aggravated by the want of some guide to point out the dangerous spot. It is no uncommon sight to see a vessel aground on these flats. The United States naval steamer Frolic went ashore here during the summer of 1873, and remained for some time. It is recommended that an appropriation of $40,000 be made for a lighthouse at this place, with the proviso that the appropriation for a lighthouse at Shipping Point revert to the Treasury.

1874  Mathias Point, Virginia, or Port Tobacco Flats, Maryland., Potomac .River.An appropriation of $40,000 for "light-house and day-beacon at or in the vicinity of Mathias Point or Port Tobacco Flats, in the discretion of the Light-House Board," was made by act of Congress approved June 23, 1874, with the proviso that the appropriation for a light-house at Shipping Point revert to the Treasury, it having been decided that there is no necessity for a light at the latter place. The character and position of the light house and beacon provided for by the above appropriation will be determined, and their construction commenced, at the earliest practicable day.

1875  Mathias Point, Virginia, or Port Tobacco Flats, Maryland, Potomac River. Under the orders of the board, the district officers made a careful examination of the Potomac River in this vicinity, with a view to determining the best location for this light-house. The board, after a careful consideration of their report, decided to locate the light-house on Port Tobacco Flats, and erect the day-beacon on the shoal off Mathias Point. The plans having been prepared, proposals for manufacturing the iron-work were called for by public advertisement, and awarded to the lowest bidder. The iron-work is now in process of construction, but will not be finished in time to erect the light-house at the site during the present season. This will be undertaken early in the spring.

1876  Mathias Point Shoal, Potomac River, Virginia.The iron-work for the foundation was finished a short time ago and is now stored at the Lazaretto Depot, Baltimore, Md. The erection of the structure is postponed until the fall, owing to more pressing and important work required at other points in the district. The framing of the superstructure is at present in course of preparation, and it is expected that operations will soon begin at the site. It is believed that the light can be exhibited during the coming season.

1877  Mathias Point Shoal, Potomac River, Virginia.At the date of the last annual report, work on this structure was in progress. The planting of the foundation-piles was begun on the 28th and completed on the 29th of September. All the iron substructure was in position on October 4, when the erection of the frame was commenced. The entire house was completed on December 6, and the light exhibited on the 20th. The structure is an hexagonal dwelling, on a screw-pile foundation. The lens is of the fifth order, and shows a fixed white light.

1882  Mathias Point Shoal, south side of Potomac River, Virginia.The roof, which leaked badly, was repaired and the station painted. A wrought-iron band, 4 inches wide and 4 ½ inches thick, was placed around one of the sockets which had been broken by the running ice in the winter of 1880-'81.

1884  Mathias Point Shoal, Potomac River, Virginia.The fog-bell machinery was adjusted in September. In April and May about 1,500 cubic yards of riprap stone were placed about the side of the house facing up the river, as a protection from running ice.

1888  Mathias Point Shoal, Potomac River, Virginia.The ice-breaker of riprap stone west of the light-house was extended toward the channel by the addition of 362 cubic yards in September.

1894  Mathias Point Shoal, Potomac River, Maryland.New landing ladders were put up, and the fuel platform under the house was repaired.

1919  During the winter of 1917-1918 ice floes wrought and unprecedented amount of damage to screw-pile lighthouses and light stations in the Chesapeake Bay and the Potomac River. It became necessary to build up existing protection works of riprap stone near to and around these stations and construct new ice barriers or breakers of riprap stone to protect the stations.
Sites: Mathias Point Shoal Light Station, Potomac River, Md., 500 tons of riprap stone were used to construct a new ice breaker and build up an existing ice breaker which was leveled off by the attack of ice floes.
The work was started November 10, 1918, and completed April 15, 1919.

1963  Mathias Point Lighthouse was dismantled in 1963 and a metal skeletal tower was erected atop the screwpile foundation to display an automated light.

For a larger map of Mathias Point Lighthouse, click the lighthouse in the above map.

A modern light is shown from a tower atop the screwpile foundation.