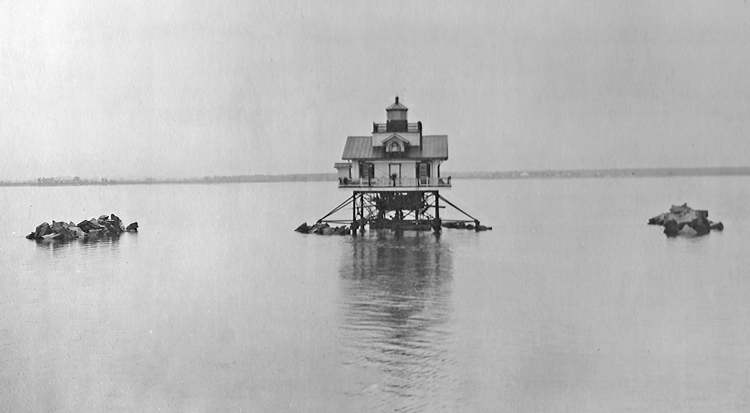 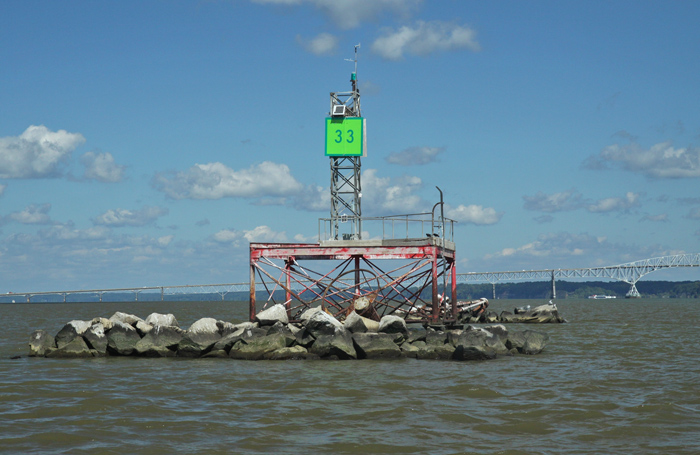 1845  Lower Cedar Point (light-vessel), in the Potomac River, off said Point, below Kettle Bottom. One lamp with 12 cylindrical wicks, 33 feet elevation from deck. Built in 1837; tonnage 72.

1855  This vessel was put in thorough repair last spring, at Alexandria, Virginia. A new illuminating apparatus, consisting of 8 constant level lamps and 8 12-inch parabolic reflectors, was substituted for the old style bowl-lamp, and a new octagonal lantern of 8 large sized panes of plate-glass, in place of the old four sided lantern, containing 48 panes of small sized common glass. The new light was first exhibited on the 25th April, 1855.

1861 - Between the 19th and 24th April, 1861, the two light-vessels in the Potomac were wantonly burned, and four in the Chesapeake between the mouth of the Potomac and Hampton Roads were removed and their apparatus carried off or destroyed. Two of these lightvessels were subsequently recaptured, but they had been stripped of everything that could be removed.

1864  Two of the light-vessels which were mentioned in the last annual report as being detained in New Bedford, under the lien law of the State, for debts due by the contractor, have been placed upon the stations on Upper and Lower Cedar Points in the Potomac river, for which they were originally designed. A competent guard for their protection has been detailed from the army.

1867  Lower Cedar Point.On the 6th August, 1867, a light was exhibited from the screw-pile light-house substituted for this vessel, and she was taken to Norfolk, put upon the railway, and carefully examined. It was found that after a thorough caulking of her sides she would be in good condition. This was done, and after being repainted yellow, and otherwise prepared for service, she was, in October, 1867, placed upon the York Spit station, which had been unoccupied since the beginning of the war.

1867  Before the war, the aids to navigation in this district included a great number of light-vessels, many of which were in waters not subject to heavy seas, and but rarely to ice of such mass and strength as to make it dangerous to permanent structures. The rebellion had swept away all the light-vessels in the sounds of North Carolina, and some of those in the lower Chesapeake. In reestablishing these stations the opportunity was presented to carry into effect an object long had in view by the Board, viz., to replace the light-vessels, wherever practicable, by permanent structures, because of their greater economy, both in construction and maintenance. Generally the stations occupied by light-vessels are of such a character that the screw-pile light-house is the most eligible form of construction for any permanent substitute. This is particularly the case in the district in question, owing to the slight elevation of the adjacent shores and their swampy formation, the shallow water and the nature of the bottom. Since the last annual report screw-pile light-houses have been erected upon the eight following stations, formerly occupied by light-vessels, viz: Roanoke river, Harbor island, Southwest Point Royal shoal and Long shoal, in North Carolina, Upper Cedar Point, Hooper's straits, and Janes' island, in Maryland, and Lower Cedar Point, in Virginia, at a total cost of one hundred and twenty-one thousand and one dollars, ($121,001,) which, under the authority of the second section of the act making appropriations for light-houses, light-boats, buoys, &c, and providing for the erection and establishment of the same, and for other purposes, approved March 3d, 1859, has been charged to the appropriation for seamen's wages, repairs, &c, of light-vessels." Thus far, no light-vessel removed or destroyed by the rebels has been replaced by a new one built for the purpose.

1893  The Star, December 27, 1893. The lighthouse at Lower Cedar Point, in the Potomac river, was burned to the piling on Monday night.
The captain of a Norfolk steamer, passing up the river on his way to Washington, saw the conflagration at a distance when it was almost over. When he reached a point opposite the light he turned the steamers search light on the place where the had been and saw only the piling on which the superstructure had been erected. The origin of the fire is unknown.
Lower Cedar Point light was on the end of Yates shoal, Maryland, on the west side of the Potomac river, opposite Lower Cedar Point, above Kettle Bottom shoals. It was a fifth-order light, thirty-three and a half feet in height, and was visible for eleven nautical miles. It was a fixed white light, with a fixed red sector. It was a white square screw-pile structure on piles, was established in 1867, and had for a fog signal a bell struck by machinery every twelve seconds. It stood in six feet of water, with deep water 160 yards off the east die. The red sector covered Kettle Bottom shoal. The lighthouse board has issued a notice stating that the light has been destroyed.
A special dispatch to the Baltimore American from Port Tobacco says that Mr. Robert T. Barbour, a tenant on the farm of the late Judge Brent, on Port Tobacco creek, first saw the fire about 8 oclock and, with his glass, watched the building until it was entirely destroyed. The lighthouse was kept by Benjamin Grimes of King George county, Va.

1893  Assistant Keeper Fields, of the Lower Cedar Point light house, Potomac River, Md., was at the Treasury Department yesterday. He reported that the light house caught fire on Christmas night in a manner unknown to him, and that he escaped with difficulty. The keeper, Mr. Grimes, was absent at the time.
Light house inspectors started for the scene yesterday, and will establish a temporary light as soon as possible, and also inquire into the cause of the fire, which is still clouded in doubt.

1894  Lower Cedar Point, Potomac River, Maryland.The wooden superstructure of this light-house was on December 25, 1893, entirely destroyed by fire. An investigation into the origin of this fire was held, but the cause was not definitely ascertained. A lens lantern was immediately placed on the iron substructure to indicate its position at night. The locality needs proper lighting at once, as it indicates an important turning point in the Potomac River. It is estimated that a proper structure will cost not to exceed $75,000, and it is recommended that an appropriation of this amount be made therefor.

1895  Lower Cedar Point, Potomac River, Maryland.Congress, by act approved March 2, 1895, appropriated $25,000 for reestablishing this station and authorized a contract therefor to the amount of $75,000.
The Board is now of opinion that a superstructure can be erected on the iron piles which sustained the burned light-house, and that it can be built for a sum well within the $25,000 already appropriated. No further appropriation for this purpose will be needed.

1896  Lower Cedar Point, Potomac River, Maryland.Plans and specifications for the metal work were printed, and the work was contracted for on March 18. The erection of the superstructure will be done by hired labor. Most of the materials required were purchased under contract, and the framing of the dwelling, preparatory to erection at the site, was carried on at the Lazaretto light-house depot. It was completed, and with the requisite force of workmen, the working plant, etc., is about to be transported to its destination.

1897  Lower Cedar Point, Potomac River, Maryland.At the date of the last annual report the materials for the rebuilding of this lighthouse, including the additional metal work required, had been procured, and the framing of the dwelling at the Lazaretto depot had been completed. The different parts of the work and the plant for its erection were loaded on scows at the depot early in July, 1896, and the tender Jessamine, with these in tow and a working party aboard, lift Baltimore on July 10, arriving at the site two days later. The iron foundation of the old light house had escaped uninjured from the fire which destroyed the superstructure in December, 1893, with the exception of two of the columns resting on the iron piles. The tension braces were unscrewed, these columns were removed and replaced by new ones, the braces were refastened, the perimeter and radial floor beams were set in place, the joists of the first story were laid, and the erection of the wooden frame of the superstructure was begun. This was soon finished and the lantern was set. The inside work, the construction of the main and lantern gallery, the setting in place of the lens, fog-bell apparatus, boat davits, and boat-hoisting apparatus, water tanks, smoke pipes, ladders, and lightning conductor were prosecuted rapidly, so that on August 20 the light-house was finished except the painting, which was completed on September 19 by two men left at the station for this purpose. The new light was exhibited on September 5, 1896. It was established with the same characteristics as the former light, but on October 10 the red sector was removed and the light is now a fixed white of the fourth order, illuminating the entire horizon. The superstructure is identical with that which was destroyed a square, white, frame dwelling supporting a lanternbut some improvements were made in the interior arrangements. A fog bell operated by clockwork is struck a single blow at intervals of 12 seconds during thick or foggy weather.

1897  Lower Cedar Point beacon, Potomac River, Maryland.A beacon light was established on the day beacon on the opposite side of the channel from the Lower Cedar Point light house. A column was erected from a caisson holding the iron cage of the beacon braced by four iron rods connecting the top with the flange of the caisson. A wooden floor was laid on top of the cage and an iron plate was placed for the lantern to rest on. Iron ladders for attendance on the light were made and secured to the caisson and cage. The lantern was lighted on September 5,1896. It shows a fixed white light

1906  Lower Cedar Point, Potomac River, Maryland.As a further protection against ice, 774.4 cubic yards of riprap stone was deposited in two nearly equal pilesone 75 feet above, the other 75 feet below the light-house. Various repairs were made.

1926  W. G. Rollinson, keeper of Lower Cedar Point Lighthouse, M.D., on the night of June 19 rendered assistance to the yacht Elizabeth when it suffered engine trouble, and obtained medical aid for a lady on board who had been injured and accommodated the party at the station overnight.

1926  W. G. Rollinson, keeper of Lower Cedar Point Light Station, Md, about August 1 rendered assistance in floating the schooner Maine which ran aground in the vicinity of the station.

1926  W. G. Rollinson, keeper of Lower Cedar Point Light Station, Md., and John L. Callis, assistant keeper, on October 29 went to the assistance of the yacht Dorothy, of Washington, D. C., which had lost her rudder near the station, and towed her to Morgantown, Md., where repairs could be made. On November 2 these two keepers also rendered assistance to the yacht Zaza, of Washington, D. C., which ran aground near the station.

1948  In August, Lower Cedar Point Light was changed to a white skeleton tower mounted on brow piles. A flashing light of 600 candlepower in the red sector, flashing every 2.5 seconds, flash 0.5 seconds, is exhibited 38 feet above water. There has been no change in the red sector or in the fog bell characteristic or type.

Formerly located on the eastern end of Yates Shoal on the westerly side of Potomac River, opposite Lower Cedar Point.
Latitude: 38.340084, Longitude: -76.993578

For a larger map of Lower Cedar Point Lighthouse, click the lighthouse in the above map.

A modern light is shown from a tower atop the screwpile foundation.