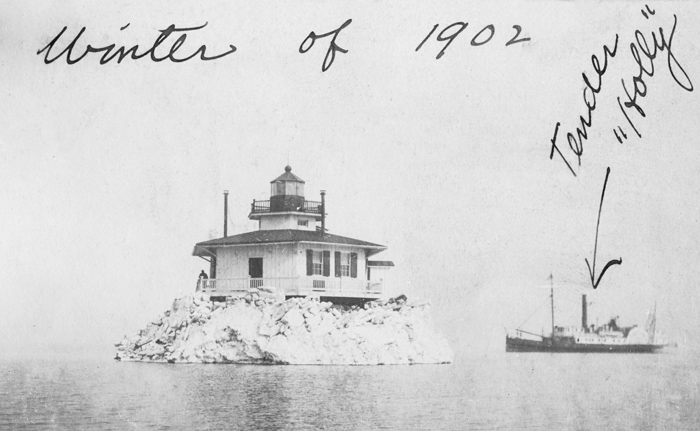 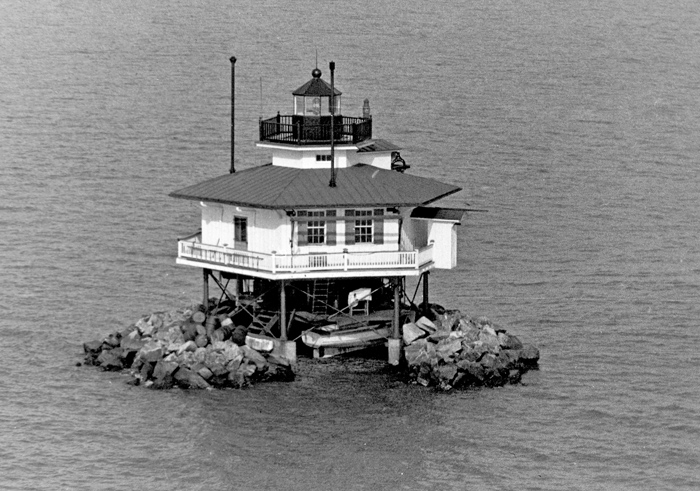 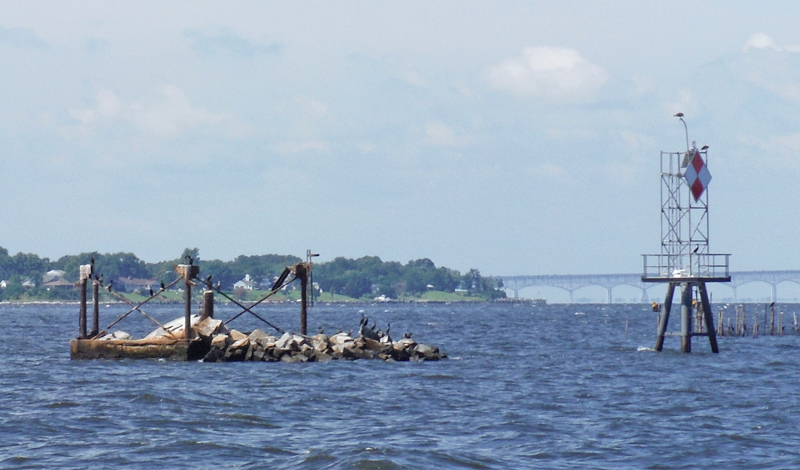 1837 - No. 13. LOVE POINT, MARYLAND.
NAVY COMMISSIONERS' OFFICE,
December 15, 1837
The reasons given by Captain Claxton against the erection of a lighthouse at this place were deemed sufficient by the board, and they reported accordingly.
I. CHAUNCEY.

BALTIMORE, May 18, 1837.
GENTLEMEN: A severe indisposition of two weeks' continuance, contracted while on a tour in the bay, has disabled me. until now, from completing my reports on light-houses, light boats. &.c. in the Chesapeake bay. I resume the series.
For erecting a light-house at Love point, in addition to the sum heretofore appropriated, one thousand dollars
A light-house at Love point, (north end of Kent island,) is uncalled for by the exigencies of commerce. It would be totally useless for vessels passing up or down the bay, and is not necessary for the limited number of craft trading in Chester river. These vessels make the run to or from Baltimore by daylight, a distance of some twenty-five miles, and if from a failure of wind, they are benighted in the bay, the lights on the Bodkin, (but nine miles from Love point,) North point, and Pool's island, all of which are in sight, afford a sufficient guide and bearing to obtain a sale anchorage, either in Chester river or the Patapsco. The channel between Love point and Swan island is a mile and a half wide, and, with the Bodkin's light to shape a course, the entrance is safe and certain. No loss has been sustained, no inconvenience felt, and believing this to be one of the numerous class of appropriations obtained more with a view to local interest and patronage than to public benefit, I respectfully report adversely to the contemplated erection.
Very respectfully,
ALEXANDER CLAXTON.
Hon. BOARD OF NAVY COMMISSIONERS

1857  The light authorized to be built on Love Point, on the extremity of the shoal, (Kent island, Maryland,) has not been commenced.
A light on this point would be of very little benefit to navigation, in consequence of the length of the shoal extending from it, and the appropriation is wholly inadequate for the erection of a stable iron screw-pile structure on the extremity of the shoal.
It has been represented by those interested in the navigation of that part of Chesapeake bay and tributaries that a light on Swan Point would subserve all the purposes contemplated by the erection of one on Love Point. To make this substitution it will require the authority of Congress, as a change of the object of the appropriation.

1868  Bloody Point and Love Point, on Kent island.Numerously signed petitions for the establishment of lights to mark these points in Chesapeake bay having been forwarded to the Board, with a report as to their necessity from the inspector and engineer of the district, the subject received careful consideration, which resulted in an approval of the objects asked for. Estimates to cover the cost are submitted.

1869  Bloody Point and Love Point.  Lights on these points seem to be required, and estimates of their cost are submitted. The building of these light-stations was recommended in the last annual report, but the requisite appropriations were not made by Congress.

1870  Love Point Shoal, iron screw-pile light-house, Maryland, north end of Kent Island, Chesapeake Bay.An appropriation having been made (this being the second time an appropriation has been made for this purpose) for the erection of an iron screw-pile light-house on the shoal waters off from the northern end of Kent Island, an examination has been made of the shoal and the plan for the structure approved by the board, which, as in the cases of the structures for White Shoals and Point of Shoals, is to be similar in general design to light-house at Deep Water Shoals, James River, but modified as to details. The structure is to stand in 10-feet water, and a little over a mile from the north end of Kent Island. It will dffer from those ordered for James River in that there are to be four ice-breakers instead of two. The drawings and specifications are now being prepared, and the work will be finished within the present fiscal year.

1871  Love Point Shoal Light-house, mouth of Chester River, Maryland.An appropriation of $15,000 was made by Congress for a Lighthouse on the shoal at the mouth of the Chester River, near the north end of Kent Island, the exact location of which was fixed at a point on the shoal in ten feet water, mean tide, distant from Love Point about one mile, in a northeasterly direction. The Light-house will be a duplicate of the one constructing for Choptank River. A contract was made for the construction of this work (after publicly advertising for proposals) with the lowest bidder. The contract requires the work to be finished by October 1, 1871.

1872  Love Point Shoal, mouth of River Chester, Maryland.An appropriation of $15,000 was made last year by Congress for a light-house on the shoal at the mouth of river Chester, near the north end of Kent Island, the exact location of which was fixed at a point on the shoal in 10 feet water, mean tide, distant from the north end of Love Point about one and a quarter miles in a northeasterly direction. The lighthouse is a duplicate of that erected in the river Choptank. A contract was made for the construction of this work, (after public advertisement for bids.) and it was expected that the work would have been completed the fall of last year. Unforeseen delays, however, were experienced by the contractor, in consequence of which it was found necessary to defer work till the spring of the present year. The lateness of the season, and several severe gales, however, caused further delay, so that it was not be finished till August 1. The light was exhibited August 15. A fog bell, struck by machinery, at intervals of five seconds, is provided.

1873  Love Point Shoal, mouth of Chester River, Maryland.This lighthouse during the winter of 1872-73 sustained considerable injury from fields of heavy, floating ice. Two of the ice-breaker piles were carried away, and two of the main columns of the lighthouse broken, so that it became necessary for a time to discontinue the light. Under an appropriation of $10,000 made at the last session of Congress, the lighthouse has been repaired and the structure protected by a riprap of loose stone placed around the light-house, forming an artificial island. The amount appropriated was not sufficient to carry the riprap as high as it should be. The location is one of the most exposed in the district, and it is therefore recommended that an additional appropriation of $5,000 be made to complete it.

1874  Love Point Shoal, mouth of Chester River, Maryland.An additional appropriation of $5,000 by Congress for the further protection of this light-house by riprap stone, was made by act approved June 23, 1874, the amount previously appropriated having been insufficient to thoroughly protect the light-house, which occupies a position of great exposure. It is expected to complete this work during the fall of this year.

1874  That the Secretary of the Treasury be authorized to settle the claim of Bigler, Young & Co., of Pennsylvania, for the erection of the light-house at Love Point, in the Chesapeake Bay, on principles of equity and justice: Provided, That the amount allowed them shall not exceed the sum of $1,694.55, which sum or so much thereof as may be necessary, is hereby appropriated for the purpose. June 19, 1874.

1875  Love Point, mouth of Chester River, Maryland.After due advertisement for bids, contract was made with the lowest bidder for furnishing the riprap protection to this light-house, under the appropriation made by act approved June 23, 1874. Since this riprap has been placed, the light-house has stood the severe test of the winter of 1874-75 without damage or material displacement of the stone. It may now be considered secure.

1876  Love Point, on the shoal making out from the upper end of Kent Island, Maryland.Serves as a guide into Chester River. The lens at this station was, on the 15th of November last, changed from a 3 ½ order, flashing red, to a 5th order, fixed white.

1879  Love Point, mouth of Chester River, Maryland.The ice in January banked up against the platform of this light-house but did no damage. To prevent it in the future, 100 cubic yards of heavy stone, weighing not less than 1,500 pounds each, have been placed on the top of the old riprap. This, it is expected, will render the station safe against running ice.

1890  Love Point, on the shoal making out from Kent Island, Chesapeake Bay, Maryland.In June the fog-bell machine, which was worn out, was replaced by a new one.

1901  Love Point, entrance to Chester River, Maryland.Some 954 feet of new decking was laid. Soundings were made around the lighthouse. Various repairs were made.

1926  Arthur Midgett, keeper of Love Point Light Station, Md., about September 9, rendered assistance to the occupants of a motor boat which was disabled near the station.

1928  Arthur Midgett, keeper of Love Point Light Station, Md., on October 21 rendered assistance to a man whose fishing boat turned over near the station.

1964  Love Point Lighthouse was dismantled, and an automatic light was erected on the screwpile foundation in its place.

For a larger map of Love Point Lighthouse, click the lighthouse in the above map.

A modern light is shown near the remains of the lighthouse's foundation.