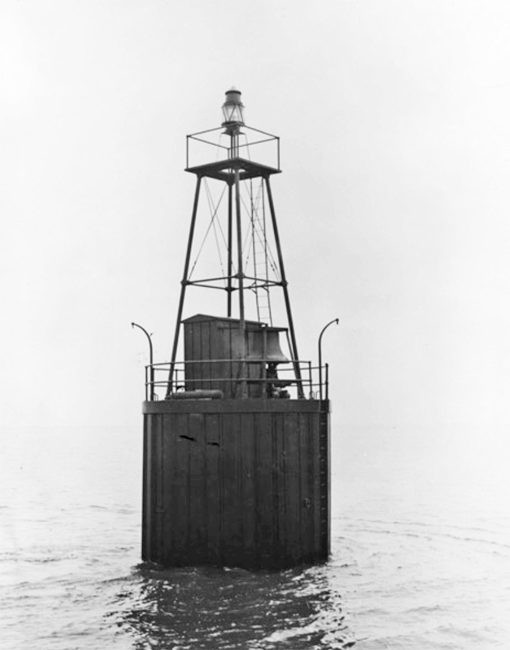 1853  For a light-boat to be stationed off James Island, Tangier Sound; or for a light-house on the southwest point of James Island, if the Secretary of the Treasury shall decide that it will answer the purposes of commerce, September 28, 1850, $8,000.

1862  All the light-vessels from Cape Henry southward, including the two in the Potomac River and those in Chesapeake Bay, (except Hoopers Straits and Janes Island,) have been removed and sunk or destroyed by the insurgents.

1867 -Janes' island.On the 18th December, 1866, this vessel was reported to be leaking badly. Accordingly the Relief was sent to take her place, and she was taken to Baltimore, where she was thoroughly examined. The estimate of the cost of the necessary repairs, (more than eight thousand dollars,) was deemed more than she would be worth after their completion; particularly in view of the early construction of a screw-pile light-house to mark the station. She was therefore stripped of all public property and sold at auction, realizing the net sum of five hundred and eighteen dollars and fifty-five cents, ($518 55.) Her lantern and accessories were sent to the light-house depot on Staten island, and the remainder of her outfit stored at Lazaretto Point.
The light from the new screw-pile light-house, substituted at this station, was exhibited on the night of the 7th October, 1867, at which time the Relief was withdrawn.

1869  Jane's Island.Two plates of glass have been set in the lantern to replace others broken by wild fowl. The station is in good condition.

1879  Jane's Island, entrance to Little Annemessex River, Tangier Sound, Maryland.An appropriation was made by Congress, March 3, 1879, for rebuilding this light-house, which was destroyed by ice January 20,1879. It was decided to use, for the new light-house, a structure of the pattern intended for Hooper's Straits and for Laurel Point light-houses, and proposals, for the metal-work of the three houses, were invited, plans and specifications therefor having been previously prepared. The contract for the metal-work was awarded in June. Work on the superstructure had meanwhile been commenced at the Lazaretto depot (in May), and is now in progress. The iron-work will be completed in December, 1879. The light-house will be in position and the light re-established early in the coming winter, so as to be of service during the dangerous portion of the year.

1880 - 304. Jane's Island, entrance to Little Annamessex River, Tangier Sound, Maryland.The framing of the superstructure of this light-house, at the Lazaretto Depot, was completed in August. The metal-work was finished by the contractors early in November, and on the 13th of that month the working party and prepared material left Baltimore on the tender Tulip, a hired schooner, and a working scow, and arrived at the site the next day. The construction platform was completed on the 17th, and the engine and iron-work were placed upon it. On the next day the center pile was screwed into position, and by the 22d all the iron-work was in place, and the erection of the superstructure commenced. The latter was completed the first week in December, and the light from it was exhibited for the first time on the night of the 20th, in accordance with the published notice to mariners, thus serving the wants of navigation during the severer seasons of the year. The light-house is a hexagonal, screw-pile structure, showing a fixed white light of the fourth order.

1885  Jane's Island, entrance to Little Annemessex River, Maryland. Two boat hoisters were set up and some minor repairs were made.

1893  Janes Island, entrance to Little Annemessex River, Maryland. In January the fog bell was wrenched from its fastenings by floating ice, toppled over on the boat hoister, which it broke, and then fell into the boat, damaging the latter also. The bell, when recovered, was found to be cracked and unserviceable. It and the boat hoister were replaced by those recovered from the wreck of Solomons Lump light-house. An iron landing ladder was put up in May.

1901  Janes Island, entrance to Little Annemessex River, Maryland. Soundings were made around the light-house. Various repairs were made.

1917  Henry S. Moore, rendered assistance to occupants of skiff caught in ice near station and furnished them food and lodging. Happened on Feb. 13, 1917.

Janes Island Light and Fog Signal were gain placed in operation February 14, 1918, having been discontinued on account of ice.

The red sector in Janes Island Light was discontinued on February 18, 1920.

1928  L.E. Bozman, keeper of Janes Island Light Station, Md., and G. A. Parks, second assistant keeper, during April assisted the powerboat Secret of Crisfield, Md., which was disabled near the station.

1935  Early in February menacing ice conditions had developed sufficienitly to threaten safety of several occupied stations on isolated shoals in Chesapeake Bay and the Potomac River. On February 8, Janes Island Light Station, constructed on iron screw piles, was completely destroyed, the keepers having had sufficient warning to escape to the mainland in safety.

1936  A new light was established atop a caisson foundation to serve as Janes Island Light.

1937  Janes Island Light Station was replaced by a 15-foot diameter, interlocking steel sheet-pile structure lines with reinforced concrete 24 inches thick, supported on wooden piles. The cylinder was filled with gravel and capped with a concrete slab. The light and fog signal is now unattended and consists of a 375-millimeter acetylene light and fog bell operated by a CO2 striker.

Formerly located on the northern side of the entrance to Little Annemessex River on the eastern side of Tangier Sound.
Latitude: 37.963396, Longitude: -75.918467

For a larger map of Janes Island Lighthouse, click the lighthouse in the above map.

A modern light is shown from a caisson foundation.