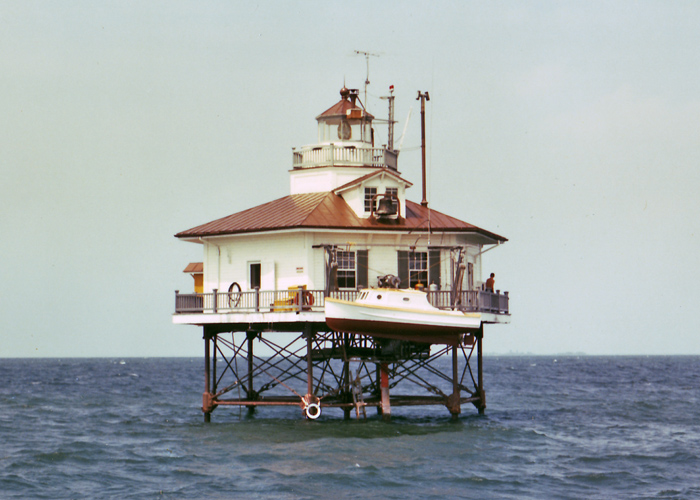 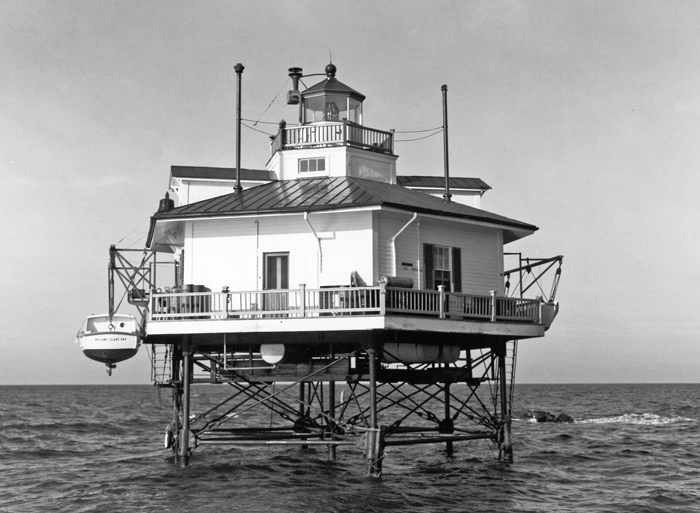 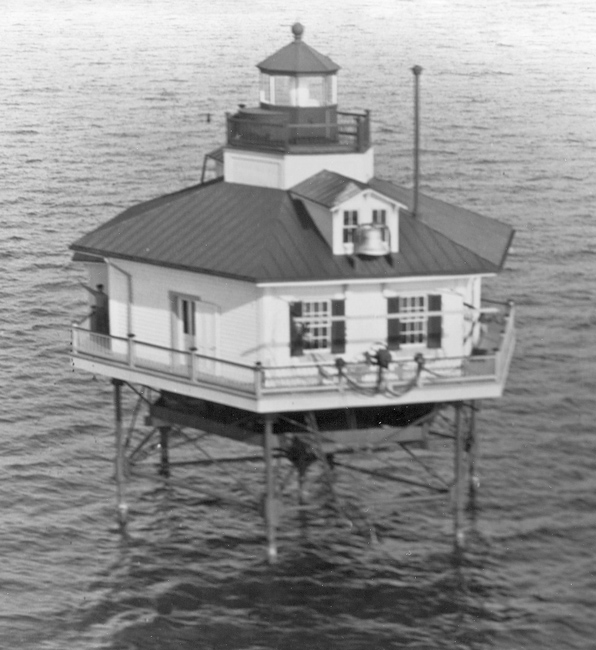 1888  Hollands Island Bar, Kedge's Straits, Chesapeake Bay, Maryland. An appropriation of $35,000 having been made at the current session of Congress for this purpose, a light-house will be located on this long and dangerous shoal as soon as practicable. It will be an important guide for both sailing vessels and steamers for a long distance both north and south of Kedge's Straits. It will also serve as a guide for vessels seeking an anchorage in Holland's Straits, and when supplied with a red sector it will, with the Solomon's Lump light, indicate the channel through Kedge's Straits.

1889  Holland's Island Bar, Kedge's Straits, Chesapeake Bay, Maryland. The work so far accomplished toward the construction of this light house has kept pace with the progress made upon the Great Wicomico River structure, which is of the same proportions and design. The large working scow formerly used for such purposes becoming superannuated and unserviceable, a new one, 100 feet long and 28 feet in width, was built at the Lazaretto depot for use in connection with the construction of this light house. It is a staunch well-built vessel, with circular bow to facilitate towage, and has been successfully launched.

1890 - 417. Hollands Island Bar, entrance to Hollands and Kedge's Straits, Chesapeake Bay, Maryland.After the construction of the Great Wicomico River light-house was well under way, preparations were made to commence the erection of this structure. The large scow was loaded with the materials, the tender Jessamine was provided with the necessary stores, a working party was sent on board, and on September 20, 1889, they arrived at the site. Work was begun on the next day, but because of continued rough and stormy weather little could be done until October. Such progress was then made that by the end of the first week in November the lighthouse was substantially completed. The light was first shown on November 25, 1889, as indicated by the notice issued for mariners. The new structure is hexagonal in plan, with screw-pile foundation, and exhibits a fixed white light of the fourth order. During thick and foggy weather a fog-bell is struck by machinery at intervals of ten seconds.

1901  Holland Island Bar, entrance to Holland and Hedge Straits, Maryland.Soundings were made around the light-house. Various repairs were made.

1931  On March 31, 1931, Keeper Ulman Owens was found dead at the station under mysterious circumstances. Though there was blood and evidence of a struggle, no wounds were found on his body and the death was ruled natural.

1957  On February 19, 1957, three ADSN Skyraiders from the Naval Air Station at Atlantic City, New Jersey bombed the light; their pilots had mistaken the structure for the hulk of the Hannibal. Three practice rockets hit the light. Although they carried no explosives, the rockets still managed to tear holes in the roof and walls of the lighthouse, and damaged several of the iron pilings as well. The keepers called the United States Coast Guard, which sent aid. Although the four men were evacuated, they returned the next day to begin repairs.

1960  In May 1960, the wooden superstructure was removed, and an automated light was established on the screwpile foundation.

Formerly located on the eastern side of Chesapeake Bay on a shoal making out southward from Holland Island.
Latitude: 38.068707, Longitude: -76.095807

For a larger map of Holland Island Bar Lighthouse, click the lighthouse in the above map.

A modern light is shown from the screwpile foundation.