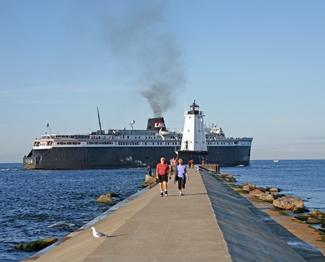 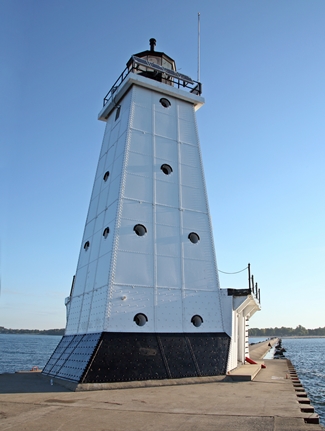 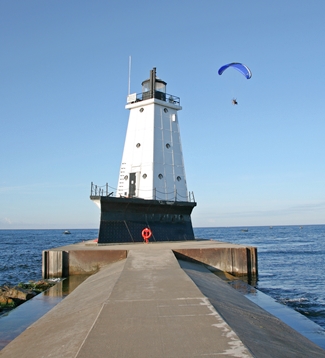 James Ludington loaned money to George W. Ford in 1854 for a sawmill operation on Pere Marquette River in what was then the Village of Pere Marquette. Ford defaulted on the loan in 1859, and Ludington took over operation of the sawmill. Ludington built a boarding house for his sawmill employees in 1866, followed the next year by a large variety store. On March 22, 1873, the Village of Pere Marquette was chartered as the City of Ludington, and many of the city streets, like James, Lewis, William, Robert, Charles, Emily, Lavina, and Delia, were named after members of the Ludington family.

In 1869, the Lighthouse Board requested $6,000 to place a sixth-order beacon light on the south pier at Pere Marquette and to build a keepers dwelling. Congress provided the funds on July 15, 1870, and a pierhead light was erected that same year, but before title to a plot of land for the dwelling could be obtained, the balance of the funds reverted to the treasury. The 1870 lighthouse consisted of a thirty-foot-tall, wooden tower, painted white, that displayed a fixed red light using a fifth-order Fresnel lens.

William Gerard, the lights first keeper, lived in an old house during his service while the Lighthouse Board made annual requests for funds to provide a proper dwelling. Keeper Girard made a valiant attempt to rescue a mariner as told in the following account taken from an 1890 history of Oceana County:

On the night of Nov. 26,1872, the weather being mild and pleasant, the schooners Souvenir and Minnie Corlett, owned in Pentwater and manned from this port, left harbor loaded, bound for Chicago. The former was ladened with 800,000 shingles, and the latter with lumber in the hold and square timbers on deck. At about 11 oclock p. m. the wind veered suddenly to the northwest and soon increased to a terrific gale, accompanied with blinding snow and the mercury dropped to zero. The next morning the Souvenir was discovered near the Claybanks south of Ludington, going on the outer bar with one man on deck at the wheel, but no one else in sight. There was no life crew to help, and the sea would not permit the venture to reach the vessel. Those on shore signaled the man on deck to tie a line about his body and let the other end float ashore. He signaled back No, either being unable to make the effort or thinking it useless. About noon Wm. Girard, the lighthouse keeper at Ludington, succeeded in reaching the vessel in a small boat, going alone, no one having the courage to accompany him. He found the man yet alive but unconscious, and he breathed but a few moments afterwards. He was the last of the crew, the rest (seven others) were all gone. The rigging and deck load were gone and the spars had fallen aft and still remained on deck.

In December 1876, the pierhead crib and light were washed away during a heavy gale. The tower was rebuilt in the spring of the following year, and then moved 140 feet to the end of the extended pier in 1880. At this time 140 feet of elevated walkway were built to allow the keeper to reach the light at all times. On November 30, 1889, a tubular lantern light was established atop a post at the extremity of the pier to form a range with the light shown from the wooden tower.

After an extension of the south pier was completed in the fall of 1890, the pierhead light was moved 750 feet lakeward and placed on the third crib from the end. The tubular front range light was also relocated, and the main light was converted into a gasoline light. To protect the carburetor used in the gasoline light, the lower portion of the wooden tower was enclosed.

In 1892, a 754-foot-long elevated walkway was built on the south pier, using 440 feet of a walkway relocated from Michigan City and 314 feet built with new materials. On August 18, 1894, Congress appropriated $5,500 for a steam fog signal at Ludington, and a ten-inch steam whistle went into operation on the south pier on January 31, 1895. The fog signal was housed in an iron-sheathed frame building built on a timber substructure and was protected from the force of the lake by a forty-eight-foot-long breakwater. An assistant keeper was assigned to the station starting in 1895 to help with the extra workload caused by the steam fog signal, and in 1897, the station was given a second assistant.

The following changes, as reported by the Lighthouse Board in 1899, were made to the pierhead light:

The beacon was moved close to the signal house and a covered way built between them. The whistle was moved from the fog signal building and placed in front of a sound deflector on the front wall of the beacon. The sound deflector was again moved from the front of the beacon and placed on the roof of the signal house at a height sufficient to clear the dome of the lantern, as the former location interfered with the operation of the whistle. The oil house was moved some 400 feet west on to the new portion of the pier. The gas machine was discontinued and shipped to St. Joseph light house depot.

After years and years of requests, Congress finally provided funds for a double dwelling for the keepers on July 1, 1898. Up to this point, the keeper had been given an annual housing allowance, which in 1890 was $60. Work on the brick dwelling, which had six rooms in each of its two apartments, began in May 1900 and was completed later that year.

On November 23, 1904, the fog signal building and attached light tower were moved 200 feet to the end of the south pier, and a steel, skeletal tower was erected 400 feet in the rear to form a reconfigured range.

Major changes for the harbor at Ludington started in 1907 when Congress authorized the expenditure of $839,000 for the construction of arrowhead breakwaters. Work on the breakwaters began in 1908, and in 1913, the Bureau of Lighthouses started requesting funds for a new breakwater light and fog signal for Ludington, which was more important than any other port on the east shore of Lake Michigan due to important railroad car ferry lines that crossed Lake Michigan from its harbor.

The timber breakwaters were completed in 1914, but before this time acetylene lights had been established on concrete columns to mark the outer end of both the north breakwater and the south breakwater. This photograph, taken in March 1916, shows how difficult it was to tend the breakwater lights during the winter months. A thirty-one-foot-tall, steel, skeletal tower was mounted atop the base of the old concrete tower on the north breakwater in 1916.

Funds still had not been allocated for a permanent light and fog signal to mark the breakwaters by 1922, when it was noted that the entrance between the breakwaters must be found by feeling around in the fog, as the existing light and fog signal on the southern pier were 1,500 feet inside the entrance to the outer harbor. This truth was made clear on February 10, 1922 when Pere Marquette Car Ferry No. 18 crashed into the north breakwater, destroying a twenty-foot section.

After the necessary money was finally provided, a light and fog signal were placed in commission at the end of the north breakwater on December 30, 1924. By this time, the timber breakwater had been replaced by a concrete structure. The lighthouse is a fifty-five-foot, steel-plate tower, which was originally equipped with a fourth-order lens and a diaphone fog signal operated by remote control from shore and powered by commercial current through a cable that ran along the breakwater. A backup oil-engine-driven electric generator was located near the old double dwelling, which was relocated from the south side of the harbor to the north side. The skeletal tower from the south pier was moved to the north pier, and a temporary thirty-one-foot steel, skeletal tower that had been used on the north breakwater was relocated to the south pier, from which the decayed fog signal building was removed.

Keeper Fred Samuelson had the longest tenure at Ludington and oversaw the installation of the new breakwater light. At the age of twenty-two, Samuelson went to Chicago in 1893 where he helped build a steel tower on a crib inside the breakwater and then helped cared for the lighthouse exhibit during Chicago Worlds Fair. The following year, he joined the Lighthouse Service at Chicago and then was transferred to Grosse Point Lighthouse. In 1898, Samuelson was promoted to head keeper and assigned to North Manitou Island, where he married seven years later. His next transfer was to Ludington, where he served from 1909 until his retirement on June 30, 1937. For three months during the fall of 1934, Keeper Samuelson was in charge of the lighthouse exhibit at the Century of Progress in Chicago.

As additional aids to mariners, a radiobeacon was established at the station in 1927, and an auxiliary fog signal was placed on the north pierhead to help guide vessels through the piers after having passed through the entrance to the breakwater. A thirty-one-and-half-foot steel tower was placed at the end of the south breakwater in August 1939 after the concrete tower there toppled over on March 15 after being damaged by the car ferry City of Flint on January 22, 1939.

The modern steel tower on the north breakwater has a unique profile that allows it to cut through crashing waves like the prow of a ship. The fourth-order Fresnel lens, manufactured by the MacBeth Evans Glass Company of Pittsburgh, Pennsylvania, served in the lighthouse until October 17, 1995, when it was replaced with a modern beacon and loaned to White Pine Village, where it was on display for several years. After a restoration in 2016, the lens was moved to the Port of Ludington Maritime Museum, which opened in 2017.

In 2005, Ludington North Pierhead Lighthouse, deemed excess by the Coast Guard, was offered at no cost to eligible entities under the provisions of the National Historic Lighthouse Preservation Act of 2000. Following the review process, the National Park Service transferred the lighthouse to the City of Ludington in May 2006. Shortly thereafter, the city signed an agreement with Sable Points Lighthouse Keepers Association, which is also responsible for Big Sable Point Lighthouse and Little Sable Point Lighthouse. The association will maintain the lighthouse and open it to the public.

For a larger map of Ludington North Pierhead Lighthouse, click the lighthouse in the above map.

From the junction of Highways 10 and 31 east of Ludington, proceed west on Highway 10 until you reach the shore of Lake Michigan where you can park at Stearns Park and view Ludington North Pierhead Lighthouse or even walk the pier to reach the tower. The lighthouse is open from 10 a.m. to 5 p.m., Wednesday through Sunday, Memorial Day weekend through Labor Day weekend. Call (231) 845-7417 or visit the Sable Points Lighthouse Keepers Association website to confirm hours of operation.

The fourth-order Fresnel lens used in the tower is on display at Port of Ludington Maritime Museum.

The lighthouse is owned by the City of Ludington and managed by Sable Points Lighthouse Keepers Association. Grounds open, tower open during the summer.