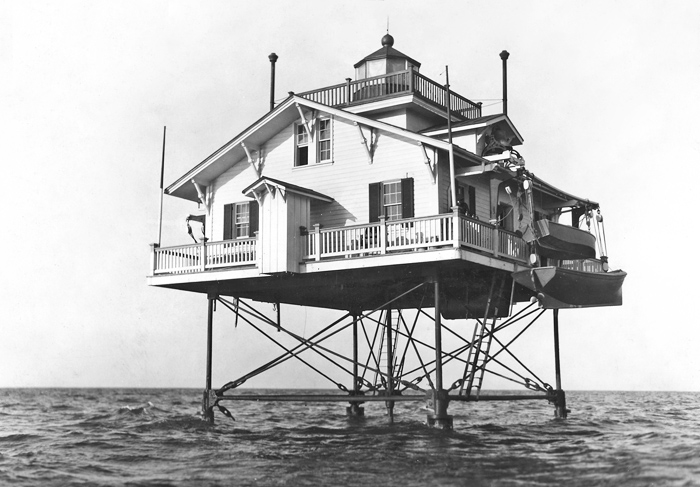 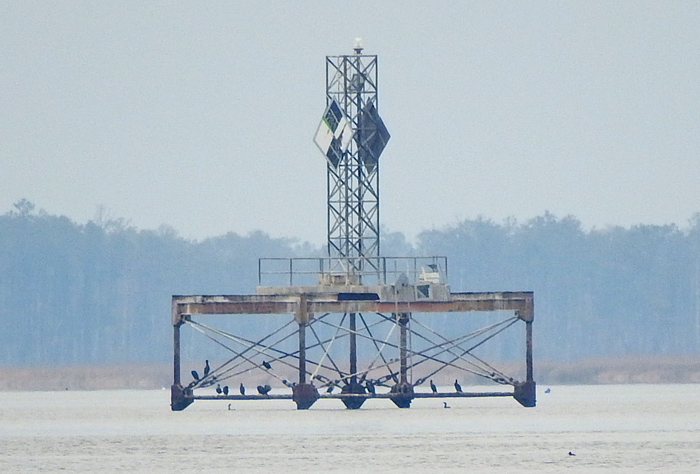 1883  Great Shoals, mouth of Great Wicomico River, Maryland. An appropriation was made by the act of March 3, 1883, for the erection of a light-house on the Great Shoals, at or near a point nearly opposite the place now marked by the Shark-Fin buoy. Plans and specifications for the structure were made, and the steamer Jessamine has made the borings necessary to enable the Board to determine the exact site on which to erect the house.

1884  Great Shoals, Monie Bay, entrance to Wicomico River, Maryland. Proposals for the metal-work of this structure were invited in January and opened on February 16, when the contract was made and the work was finished by the end of the fiscal year. The lumber was purchased in January and the mill-work in February. Work on the framing of the superstructure was commenced at the Lazaretto depot in February and on July 1 was about two-thirds completed, only a small force being employed during most of the time. The metal-work has all been delivered and is stored at the depot. It is proposed to undertake the erection of the house at the site at as early a day as possible.*
*This station was lighted on August 15, 1884, for the first time, in accordance with the published notice to mariner

1885  Great Shoals, Wicomico River, Maryland.On July 17, 1884, the tender Jessamine, with a working party on board and scows in tow carrying the metal-work, reached the site. The trestles were at once placed in position and the working platforms constructed. The driving of the piles was commenced on the 19th and finished on the 21st. The iron foundation was all in place on the 22d. The frame was erected on the 26th, and by the 28th it was sheathed and weather-boarded. By the 31st the tin roof had been completed, the main floors laid, the lantern and lower gallery railing and decking put up, some of the inside work completed, and the outside of the house painted. On August 5, the platform was removed, and on the 9th all the work except the painting was completed. Two men were left to finish the inside painting and await the arrival of the keepers. The light was shown from the new house on August 15, 1884, in accordance with the published notice to mariners.

1901  Great Shoals, mouth of Wicomico River, Maryland.Soundings were made around the light-house. Various repairs were made.

1916  C.C. Tyler, keeper, rendered assistance to 3 persons in disabled launch and furnished them food and shelter. Happened on October 30, 1916.

1918  On December 13, William McDorman, assistant keeper of Great Shoals Light Station, Md., furnished food and lodging to three men who had been oystering in the vicinity of the light station and the weather being foggy had become lost.

1919  William McDorman, assistant keeper, rendered assistance to officer and men of Aviation Corps in a boat.

1966  Great Shoals Lighthouse was deactivated and replaced by an automatic light mounted on the screwpile foundation.

Formerly located on the southern end of Great Shoals in Monie Bay on the northern side of the entrance to Swash Channel leading to Wicomico River.
Latitude: 38.214372, Longitude: -75.879402

For a larger map of Great Shoals Lighthouse, click the lighthouse in the above map.