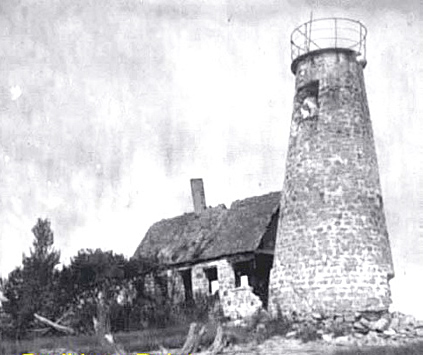 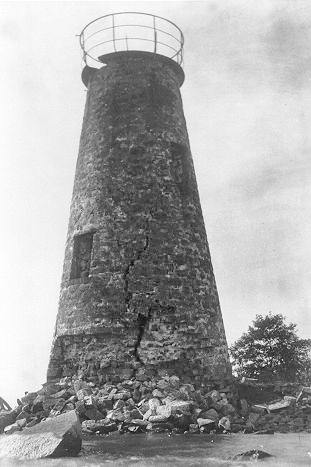 1821 - Contract for construction of the lighthouse was awarded to Thomas Evans and William Coppeck.

1838  Bodkin light-houseBurns thirteen lamps with twelve spherical and one parabolic reflectors; the latter much the best. With this light I made the following experiment: At 8 P. M. (at one mile distant) the reflectors were removed until 9 P. M.; no difference could be perceived in the light at that distance. This light has been remarkably well kept, and noted for the brilliancy of the light.

Bodkin Point, on Bodkin Island, south side of entrance to Patapsco River and port of Baltimore, Chesapeake Bay. Fixed light. Built in 1822; refitted anew in 1845.

1851  BODKIN POINT LIGHT-HOUSE.
Mouth of Patapsco; bay and river light.
William H. Glover, keeper, appointed March 28,1849; relieved the widow Tatem; was a blacksmith and boiler-maker by trade; had no knowledge or instruction previous to taking charge; had received the usual printed-instructions only; lights up after sunset, and puts out at sunrise; gets his lamps ready for lighting before sunset.
Has no measurer to measure the oil; guesses at the quantity of oil used, by the gallon measure, the only one he has; trims only at 12 o'clock: in the winter trims at 10 and 2, or 2 1/2; has no means of ascertaining the hour of the night.
Thirteen 16-inch parabolic reflectors; lamps and reflectors in very bad order; lamps brass, burners bad ; lantern small, glass 9 x 10; no ventilatorssmoke escapes through top of the lantern only; soot very thick over the dome, and the whole lantern black and dirty: filled with cleaning-rags, broken chimneys, &,c.
Oil last year very bad; this year better.
Tower built by contract; rubble-stone, like all those which have been seen, that were built in this manner; new painting pretty good; inside wood-work bad; dwelling of rubble-stone; cistern in good order; never inspected before, (keeper ;) at 11 1/2 a. m., nothing clean or ready for lighting; copper conductor; keeps a journal of weather, and expenditures of oil, (latter guessed at;) consumed last year upwards of 520 gallons, but could not show the exact quantity consumed; compelled to use the bad oil, because they do not take away bad oil.
The keepers son and little daughter commenced taking down the lamps and reflectors so soon as the keeper saw the collector with us.
Lamps, burners and reflectors very dirty; the burners were so full of carbonized wick and dirty oil, that it would not be possible to produce a reasonably good combustion; chimneys very much smoked, showing clearly that the light is not perfectly kept.
No trimming-scissors.

1851  Bodkin Point or Seven-foot Knoll light-house, mouth of the Patapsco, Chesapeake bay.
Office Light-house Board, October 10, 1851.
SIR: I have the honor to submit, herewith, plans, drawings, and specifications for a light-house on Seven-foot knoll, in the Patapsco river, which have ben carefully prepared by the Committee on Construction of Light-houses, and examined and approved by the board.
Very respectfully, your obedient servant,
Wm. Branford Shubrick,
President Light-house Board
Hon. Thomas Corwin
Secretary of the Treasury

1914  Tower collapsed due to erosion of Bodkin Island.

For a larger map of Bodkin Point Lighthouse, click the lighthouse in the above map.