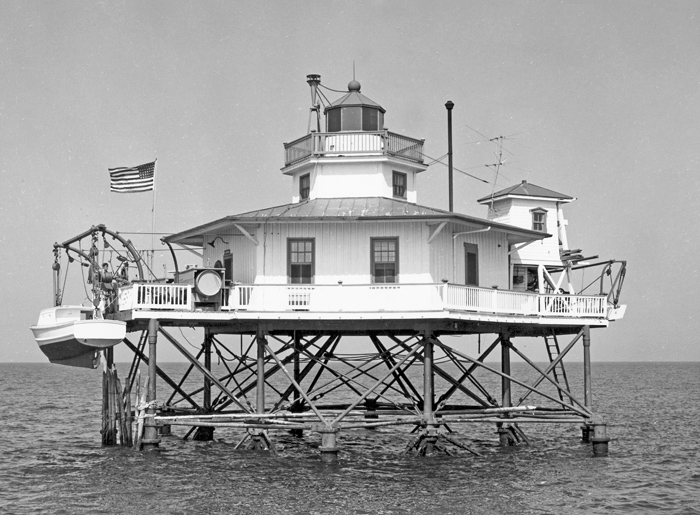 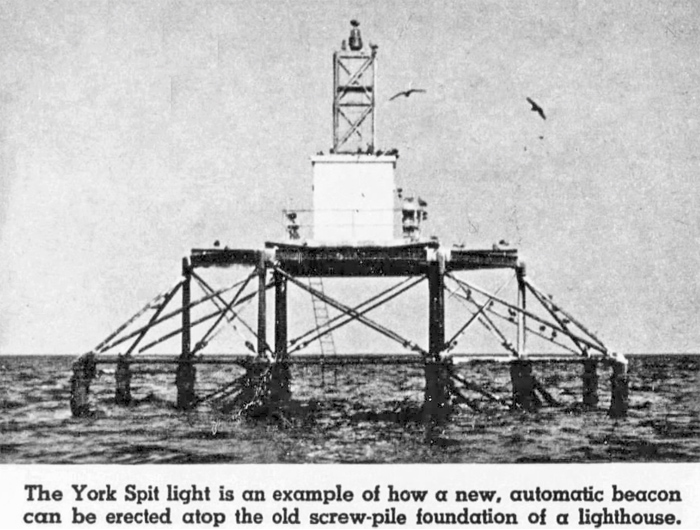 1837  To enable the Secretary of the Treasury to provide by contract for building a light-boat on York River Spit or a light-house in the State of Virginia, March 3, 1837, $10,000. (This amount was carried to surplus fund).

1853  CUSTOM-HOUSE OFFICE, Yorktown, Va., September 19, 1853. GENTLEMEN: A light is indispensably necessary at the York spit. The soundings on the east side of the spit are gradual, and vessels are easily warned of danger. But not so on the southwest point. The soundings up to the point are eight fathoms water, and the next instant vessels strike on a hard sand-bank. On the opposite side of the spit, the Egg Island shoals, and Jews Marshes point, present another obstacle to safe navigation. Many vessels have been injured, and some wrecked, on these two points. At night, in a gale of wind, vessels are prevented from making the safe harbor of York river, by the danger of running either upon the spit or the Egg Island shoals, and are compelled to run all risk in the Chesapeake bay. In addition to the above mentioned, several masters of vessels, who have for years sailed up this river, have suggested the importance of a buoy being placed at Green point, and one at Sandy point, up the river. With the latter I am quite familiar. There are there sunken oyster rockspositions of which only are visible at very low tides. With the light-boat, and the buoys at the points severally designated, the navigation of this river, from the bay to its source, would become perfectly safe and easy for any class of ships or vessels, in the day or night, under any circumstances, and in any sort of weather. I do sincerely hope the department will take this subject into serious consideration; and that these much-needed improvements, to which the people here have looked to in vain for years past, will now be accomplished, when the commerce of York river is rapidly increasing in importance. The accompanying documents exhibit the opinion of some of the most respectable and intelligent portion of this community, which I have deemed necessary to add to my suggestions.

I have the honor to be, gentlemen, very respectfully, your obedient servant,
PHILIP J. BARZIZA, Collector.
To Messrs. THORNTON A. JENKINS,
EDMOND L. F. HARDCASTLE,
Secretaries of Light house Board.

1867  York Spit  The vessel formerly stationed to mark this danger was removed and destroyed by the rebels in the spring of 1861. Upon the completion of the screw-pile light-house at Lower Cedar Point, the light-vessel thus relieved was taken to York Spit and established upon that station.

1869  York Spit.Light-vessel No. 24, which was on this station, was withdrawn in September for the purpose of having a new lantern-mast put in, and No. 21 sent to take her place. As soon as the repairs are completed No. 24 is to be again put on the station. A screw-pile lighthouse is to be constructed this winter, and in the spring of next year erected at the station, when the light-vessel will be permanently withdrawn.

1870  York Spit, iron screw-pile light-home, Virginia, off mouth of York River, Chesapeake Bay.The iron and wood work of this light-house were prepared simultaneously with Wolf Trap, before the departure of the party for the erection of Wolf Trap light-house. The whole was kept in store at Baltimore until needed. On the completion of the foundation of this latter house, which was on the 30th of June, the site of the structure for York Spit was located, and the work of placing the temporary platforms and trestles commenced July 5. A relief lightvessel, which had served to mark the works at Wolf Trap, was towed to and anchored at York Spit for the same purpose. From July 22 until August 2, the time was occupied in loading the schooner with piles, iron and wood work, and supplies necessary for the prosecution of York Spit operations. The vessel left Baltimore August 3, and arrived at its destination August 5. The pile was driven August 10, and the last, or fourteenth one, on the 30th. This shoal proved to be even harder than that of Wolf Trap. In the latter case, the wooden piles, on the supposition that it was a very soft bottom, were not shod, and the difficulty experienced in driving them called attention to the necessity of shoeing those at York Spit with iron points. Notwithstanding this aid, it required 243 blows of a 1,600-pound hammer to effect a penetration of 20 feet in the first pile. At this date the iron-work of the structure is all set up and properly coupled together and braced, the staging removed and sent to the Lazaretto depot, and the frame of the house is in position. The structure is unexceptionably built, and progressing finely, the indication being that it will probably be ready for illumination some time in the latter part of November of this year.

1871  York Spit Light-house.At the date of the last annual report the iron-work of this structure was set up, properly coupled together and braced, staging removed, and the frame of the house in position. During the month of November the joiners work was completed, painting finished, and the lens set up. The Light was exhibited for the first time November 15, 1870, and the Light-vessel which formerly marked this dangerous shoal was permanently withdrawn. This Lighthouse is built on fourteen wooden piles, incased in cast-iron sleeves, and stands in twelve feet water, near the end of-the shoal at the mouth of York River, from which it derives its name.

1874  York Spit, on easterly end of York Spit, entrance to York River, Chesapeake Bay, Virginia.The lens at this station is of the fifth order, fixed red. The shoal on which the structure stands is some distance, however, from the main channel, and the light is not strong enough for the purpose required. It is proposed to substitute a lens of the fourth order, with the double-wick lamp.

1876 -York Spit, entrance to York River, Virginia.On the 6th of August, 1875, the illuminating apparatus at this station was changed from a fifth to a fourth order, with double-wick lamp-burner. The change has been highly appreciated by mariners.

1882  York Spit, entrance to York River, Virginia. A device for the more rapid and easy handling of boats was put up, and the decking on two sides was repaired.

1887  York Spit, entrance to York River from Chesapeake Bay, Virginia.A new fog-bell tower was constructed at the Lazaretto depot, and erected at the station after the removal of the old one in November. Slight repairs were made to the station at the same time. It is now in good order.

1896  York Spit, entrance to York Spit, Virginia.In October the lens was sent to the general light-house depot for repair. It was replaced by a lens lantern until its return in January. Various repairs were made.

1901  York Spit, entrance to York River, Virginia.Soundings and measurements were made from time to time during the year to ascertain the extent of scour under the house and around the piles. In September, 1900, much decayed wood was removed from the fog-bell tower and replaced by new pieces. Various repairs were made.

1902  York Spit, entrance to York River, Virginia.Soundings were made around the light-house in July and October, 1901. The erosion of the shola has been considerable since the structure was built in 1870.

1903  York Spit, entrance to York River, Virginia. In December and January 1,150 tongs of riprap stone were deposited around the piles to protect the foundation from further scour, and in June 1,200 additional tons were placed in position. Various repairs were made.

1916  On the night of August 22 John F. Hudgins, keeper of York Spit Light Station, Va., rescued nine persons (two men, three women, and four children) from a disabled launch and brought them to the light station, where they were furnished food and kept overnight.

1921  At York Spit repairs were made to metal substructure.

1921 - J. E. Morgan, keeper of York Spit Light Station, Va., on November 15, went to assistance of a disabled gasoline launch, towed it to safety, furnished packing, and helped to repair engine, so that occupants were enabled to continue on their way.

1923  G.C. Hunley, assistant keeper, rendered assistance to the United States seaplane No. 5060 with two men aboard, which became disabled in the vicinity of the station. Happened on January 3, 1923.

1923  John E. Morgan, keeper of York Spit Light Station, Va., on July 16 rescued the occupants of three canoes who were caught in a severe thunderstorm in the vicinity of the light station. See LSB Aug 1923.

1926  William J. Diggs, keeper of York Spit Light Station, Va., on September 25, rendered assistance to three soldiers on a fishing trip by taking them on board station when a strong wind prevented them from getting ashore.

1928  John L. Callis, assistant keeper of York Spit Light Station, Va., on August 11, during a heavy storm rendered assistance to three soldiers adrift in a boat near the station.

1933  The following report has been received from W. J. Diggs, keeper of York Spit Light Station, Va., on the west side of Chesapeake Bay: I am writing to state condition of station after storm at 6:30 a.m. (Aug. 24). Floors began to burst up, wind increasing, tide coming up. Sea higher at 8:30 a.m. Sailboat broke away. Sea breaking over deck. All lower works badly damaged. At 9:30 a.m., total wreck on lower floor. Oil tanks broke away and did a lot of damage to ironwork and sills before getting clear. Cookstove completely gone. All cooking utensils gone. Lot of decking and handrail broke away. Station is now in very bad condition. I did not think it would stand. It could not if wind had continued so forceful it almost lifted house off structure a good many times.
York Spit Lighthouse is a wooden dwelling on iron piles, standing in 13 feet of water on the north side of the entrance to the York River. It has been necessary to establish a temporary light pending repairs. One keeper was ashore. The finding of the station boat on the shore unoccupied led to erroneous reports that the other keeper had been lost; he was taken off the station by fishermen.

1960  April 26, 1960  Tue Marshes Light Due To Be Automatic Another Chesapeake Bay area lighthouse will be converted soon to automatic operation and resident Coast Guard personnel reassigned. A recent Coast Guard announcement said Tue Marshes Light Station near the mouth of the York River will be converted with resident personnel no longer in attendance, on or about June 1. During the progress of the work, the intensity of the light will be changed to 1,200 candlepower for the white sector, visible 12 geographical miles, with a 41 foot focal plane. The characteristic will be changed to flash one second, eclipse 4 seconds, with red sector from 137 to 158 degrees true. A bell buoy will be temporarily established 100 yards from the light in about 35 feet of water and equipped with a white reflector, the announcement indicated. York Spit Light Station previously announced on the schedule of conversions is to be converted on or about May 1. The work is part of a program of the Coast Guard to place most of the area light stations under automatic operation without resident personnel.

Formerly located on the southeast end of York Spit on the northerly side of the entrane to York River from Chesapeake Bay.
Latitude: 37.209741, Longitude: -76.25405

For a larger map of York Spit Lighthouse, click the lighthouse in the above map.

A modern light stands adjacent to the foundation of the former light.