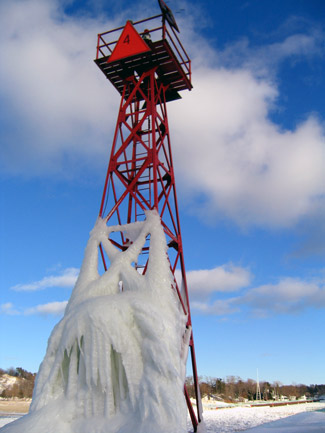 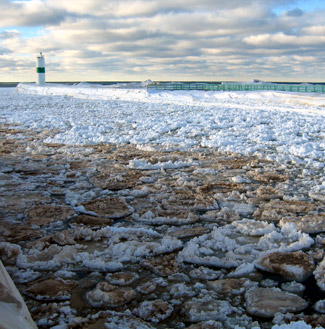 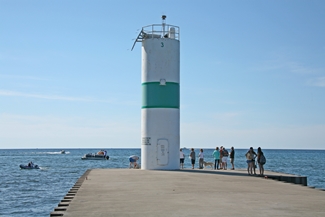 Along the shores of Lake Michigan, just north of the quaint village of Pentwater, you will find Charles Mears State Park. Carrie Mears, daughter of Charles Mears, donated the land for the park to the State of Michigan in 1923. Born in Massachusetts in 1814, Charles Mears became an orphan at the age of fourteen but still managed to receive a basic education and learn the cabinet trade.

In 1836, Charles and his brothers decided to try their luck out west in Michigan and initially settled in Paw Paw, where they ran a general merchandise store. The following year, the Mears brothers, accompanied by two other men, sailed north along the shore of Lake Michigan scouting out sites for lumber mills to process the untouched stands of pine trees. Charles Mears built his first lumber mill on White Lake in 1837, and over the next twenty-five years he constructed another fifteen mills and built five harbors along the eastern shore of Lake Michigan.

One of the mills Mears built was at the mouth of Pentwater River in 1855. Mears improved the channel linking the river to Lake Michigan and built a store and boarding house for the workers running the mill. After a deposit of clay was discovered, Mears added a tile and brick factory to the community. Mears named his settlement Middlesex, but in 1867 it was absorbed into the newly created village of Pentwater. That same year, a resolution from the legislature of Michigan was presented to Congress calling for the creation of a harbor at the mouth of Pentwater River. Congress appropriated $55,000 in 1867 to start the work, and during the next two years cribs were built at Ludington and towed to Pentwater to create piers.

A square, open-frame wooden tower with an enclosed upper portion was built at the outer end of the south pier at Pentwater in 1873. An octagonal lantern room housing a sixth-order lens topped the white, thirty-three-foot tower, and the fixed red light was first placed in operation on June 20th of that year. The tower was twelve foot square at its base and diminished to eight feet at the lantern room. An elevated walkway was built so the keeper could access the tower in any weather condition, but no keepers dwelling was provided. To correct this problem, the Lighthouse Board requested an appropriation of $5,000 in 1873, but a dwelling was apparently never built, as the Lighthouse Board requested funds for one as late as 1906.

The first keeper of Pentwater Lighthouse was Francis McGuire, and when he resigned in 1877, his wife Annie took charge of the light and served until being removed in 1885. Barney Evers was the third keeper, and his lengthy service at Pentwater spanned twenty-six years.

A post was put in place at the outer end of the south pier in 1890 to hold a tubular lantern that formed, with the main pierhead light, a range for entering the harbor. This new light was put in operation for the first time on August 15, 1890. A brick oil house with steel doors was added to the station in July 1913.

In 1919, the front and rear lights were changed from oil to acetylene, and the position of keeper was eliminated. No longer needed, the elevated walk was also removed at this time.

The Army Corps of Engineers finished replacing the old timber piers with concrete structures in 1937, and a metal skeletal tower was placed on the southern pier in June of that year to mark the rivers entrance. E.F. Kent, commodore of the Pentwater Yacht Club, enlisted the help of Congressman Albert J. Engel in gaining ownership of the old wooden lighthouse, so it could be mounted on the roof of the groups clubhouse.

A 12,000-pound, thirty-foot-tall, prefabricated cylindrical tower, manufactured in Tulsa, Oklahoma and trucked to Ludington, was placed on the north pier by a National Guard Chinook helicopter on October 8, 1987. A large crowd, including the Pentwater High School Band, was on hand two days earlier to welcome the new lighthouse, but high winds forced the effort to be postponed after repeated efforts to land the tower failed. This new tower not only contained a light, but also a foghorn and radiobeacon. Pentwater Village President John Morris noted that the push for the new tower was a community project to obtain better aids to guide boaters into Pentwater Harbor during adverse weather.

The 1987 tower was designed by Jon Kiernan of the Coast Guards Ninth District Shore Maintenance Detachment in Cleveland and was modeled after the common D9 Tower, but was made taller and wider so it could house extra equipment and the necessary power sources.

Maynard Barrus, a former fishing charter captain and one who pushed for the new lighthouse, had plenty of first-hand knowledge of the need for improved navigational aids. Many times Ive been socked in in the fog out on the big lake and it would have been impossible to find the harbor had it not been for Coho Bob with a radio direction finder who could help guide boats into the harbor on foggy days, Barrus said. When Coho Bob wasnt available to guide mariners in, Maynard Barrus and others would drive to the waterfront and shine their lights and honk their horns to help the boaters find the harbor. A year before the tower was placed on the north pier, a boat went on the rocks trying to find the harbor entrance.

The disparate 1937 and 1987 towers continue to help mariners find their way to the piers and into Lake Pentwater.

Located in Pentwater, these lights mark the entrance to the channel connecting Lake Michigan and Pentwater Lake.
Latitude: 43.781539, Longitude: -86.444137

For a larger map of Pentwater Pier Lighthouse, click the lighthouse in the above map.

From Highway 31 take the Highway 31 Business Route into Pentwater. Once in Pentwater, turn west on Lowell Street which will take you to Charles Mears State Park from where you can view the lights.